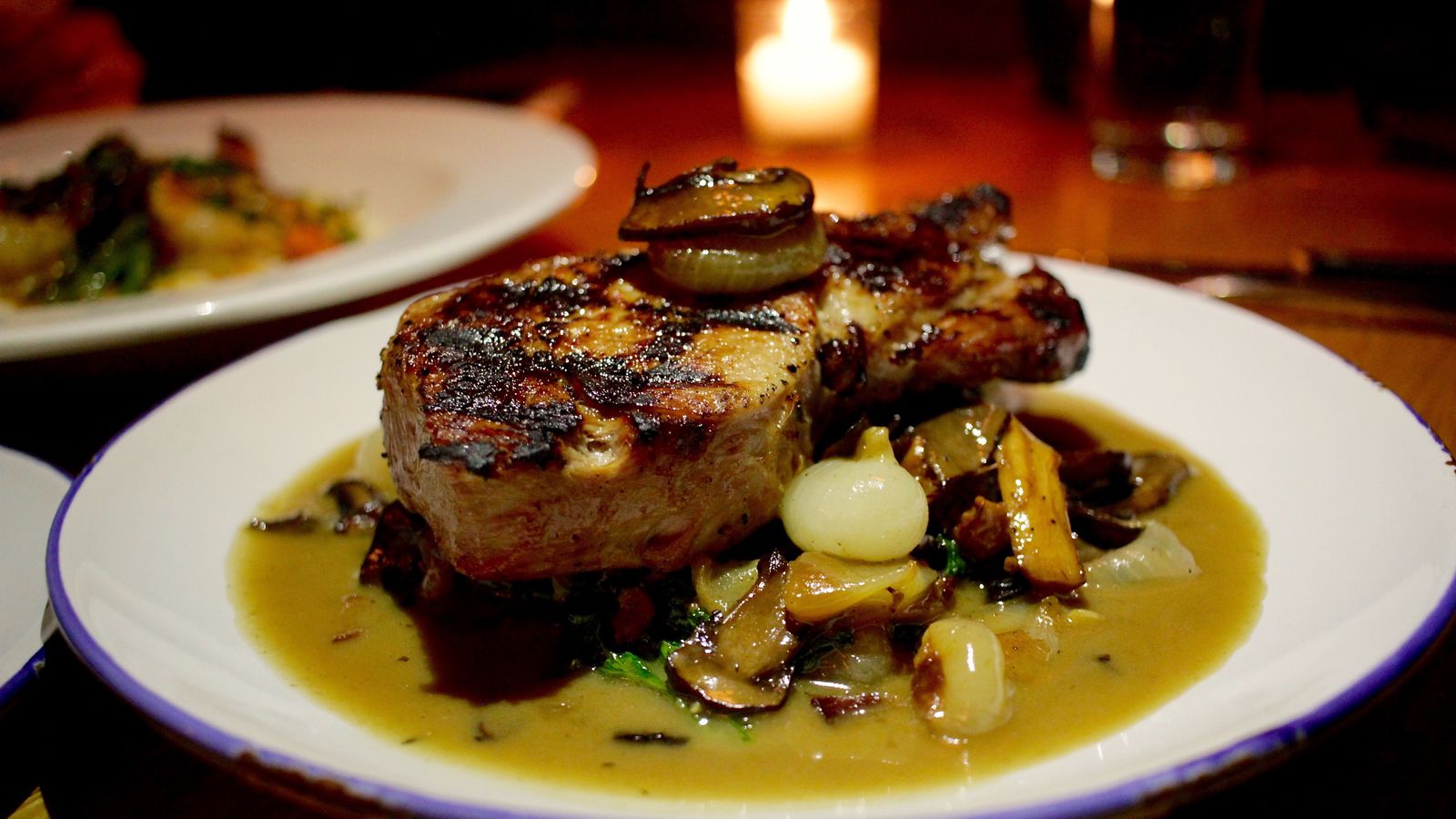 Because you really should have gotten rid of all that leftover turkey by now.

Dude, how do you make a list of pork chops in LA and not include Salt’s Cure? They practically invented the damn thing as the entree to eat on the same level as, or even above steak on most menus in this city.

And how do you not include Hatchet Hall’s version?? Because Hinterland’s was too similar?

I love Bestia, too, but when I had their pork porterhouse it was incredibly dry, and mostly pointless (though the sides were spectacular).

Is that a thing?

They got Chi Spacca and Sotto right. I had huge expectations for Salts Cure and was a bit disapointed.

Yeah, I guess that’s fair enough…I haven’t been in a long time myself, but it seems like a heritage brand or something.

Could it really be any worse than what they’re serving at Pann’s?.. I would be ok leaving it off a list of “top 5 pork chops” where the others are just the super high quality ones available in LA, but this list includes ones that I just can’t imagine are any higher quality, unless Salt’s Cure has seriously just completely tanked and become craphole… the grapefruit pie was still pretty good last time I stopped in for a slice at least!

I think people still do go there haha

I suppose I just happened to be on the scene back when Salt’s was the new kid on the block. I had a similar experience at the now defunct Cooks County, where their pork loin and bacon seemed revelatory to me, until the chef there told me he took his inspiration from a place called Salt’s Cure. So the following week I went to Salt’s Cure, and my entire life changed, and I feel that dining culture in Los Angeles changed at the same time (not due to me, I was just there when it happened). Salt’s Cure made it acceptable, and even encouraged placing high-quality pork on menus alongside the usual steak options, they made it acceptable to serve pork pink, they made the focus about the quality of the meat, and much less so on sauces, and sides. Their flagship item was this seemingly ridiculously simple pork chop that attained a kind of satori of fat, savor, and crunch. it was a total mystery how they did it. (Well, it turns out that a big part of it was being able to directly source absolutely incredible pork from Lindy & Grundy, their decline began with the shutter of that legendary Butchershop).

Of course, I graduated on the Chi Spacca, as did the rest of Los Angeles, and now pork chops helm menus all around LA, or, at the very least, are seen on all of the hot restaurant lists on equal footing with steaks. And Eater can make a list about pork chops by themselves.

Yeah, The Old Country Cafe was probably doing its pork chop fried rice, and Pann’s was doing something before Salt’s Cure was born, but people seem all too ready to forget that without Salt’s Cure, there most likely wouldn’t have been a Chi Spacca (Would Mozza Group have given a young, unknown Chad Coby the reigns to his own meat emporium based on a few successful dinners in their pizza school if Salt’s Cure hadn’t shown that a restaurant focused just on meat could be super successful?), or such a proliferation of grand pork chops in general without Salt’s Cure.

I imagine hardly anyone cares about the history, you can’t go eat at a place based on its historical value after all, but for a few of us that lived through that period, it was an exciting time, and represents the origin of one of the best trends in LA dining to emerge over the past 5 years.

Even looking at all of the chops out there now… hardly any of them strictly walks that minimalistic line of the original Salt’s Cure chop that just showcased stunning pork, cooked pink, with a caramelized crust, left to be flavored mostly by its own porcine juices. All of the second-generation chops are glorious in their own way, sure, but they focus on additional flavoring, or accompaniments. The closest to the bold minimalism I’ve come across has been Hatchet Hall’s chop, with extraordinarily carefully sourced pork, cooked pink, and presented on a plate by itself with minimal vegetables, and a like maple-tinged version of its own juices.

I guess @set0312 is correct when he asks whether anyone eats at Salt’s Cure anymore; I guess that’s not a thing; not only literally, but metaphorically, no one is interested in minimalism like that anymore now that they’re discovered fennel pollen, and mostarda.

Salt’s Cure made it acceptable, and even encouraged placing high-quality pork on menus alongside the usual steak options

I haven’t been to Jar in forever, but they’ve had a good pork chop on their menu for years now. High end “steak house” pork chops are not new, just currently in favor.

Not what I am talking about at all.

Pork chops, if you saw them done well at all, were second-tier items in steak houses. Sometimes places did them in an interesting way like Jar’s Char Siu chop. But that was pretty much it. You either saw them as cheaper options in steak houses, or in diners like Pann’s.

Salt’s Cure has never been a steak house. They may have had steaks at one time or another, but they were never the kind of dry-aged behemoths found in steakhouses. The pork chop was basically the only constant on the menu every night, and was the highest priced item on most nights (even where there was a steak on the menu usually, except when they did massive ribeyes).

They made it acceptable for non-steak houses to have a pork chop as their most expensive meat dish. The pork chop became its own category, not just a secondary item, and at the same time the relatively lower cost of pork also freed it from the steak house model in general.

In fact, other than CUT and Jar, you will notice that the Eater list of pork chops doesn’t come from steak houses. That is the ethos that Salt’s Cure began.

Good old Salt’s Cure. How the mighty have fallen. Gold dropped them significantly in his rankings, so it seems we aren’t the only ones to notice the fall.

Not just dropped, he took them off the list.

Most of that pork came from Reride Ranch, and as of last summer, Lefty has gotten out of the hog ranching game. It’s really a shame…

We could’ve put a list of 79 great pork chops. These are ones that we’ve tried.

BTW, it wouldn’t have been super useful to put Salt’s Cure when the place is currently closed in anticipation of their move to Highland Ave

BTW, it wouldn’t have been super useful to put Salt’s Cure when the place is currently closed in anticipation of their move to Highland Ave

Salt’s wasn’t closed at the time the list dropped if I recall, but surely these lists aren’t only good for the 1 week after they are made up? I would rather you just say it’s not that good anymore.

Were you aware that Hatchet Hall had an extremely good pork chop, but chose not to go? Or were you not even tipped off to the fact?

Seems like Hinterland is barely known compared to Hatchet Hall, so quite curious what the selection process is of which ones to try. Very surprised that you end up putting everything you try on the list, meaning all the criticism is done in selecting which places to go eat at I guess?

Not to answer for him, but who knows how quality will transfer at a new restaurant. Matthew would have to go to the new Salt’s Cure, try the chop, etc.

At the same time, for the average reader, an Eater list is about immediacy. I doubt many people will be stumbling about that article in two years, and that’s fine.

We knew it was closing imminently. I like Hatchet Hall and their pork chop. I think their other dishes are better than the pork chop.

Here’s the thing, I eat out about 12-15 times a week, and I’m already breaking through all my clothes. I don’t have time to work out…so I’m trying my best to balance it all out (I walk as much as I can).

There are just a ridiculous number of restaurants and I can’t possibly get to all of them (though I try very hard!) Every round up can’t include every restaurant, so we just highlight and write about the ones that we feel are compelling. It’s not exhaustive or scientific, just helpful for you guys, the readers. If you know Hatchet Hall has a great pork chop, then you know it! And we’ll keep writing about the other great stuff HH does (in fact, I specifically chose the place for our Vox Media holiday party next week!). I appreciate your feedback though, and I’ll continue pushing the fabric boundaries of my clothes in an attempt to try as many restaurants in LA as possible.

Well, what I hope to do is update the list every so often, perhaps once a year, if pork chop remains a popular entree item (tastes chance, so do chef’s menus).

Really? I use eater lists from years past all the time. Had no idea, hah.