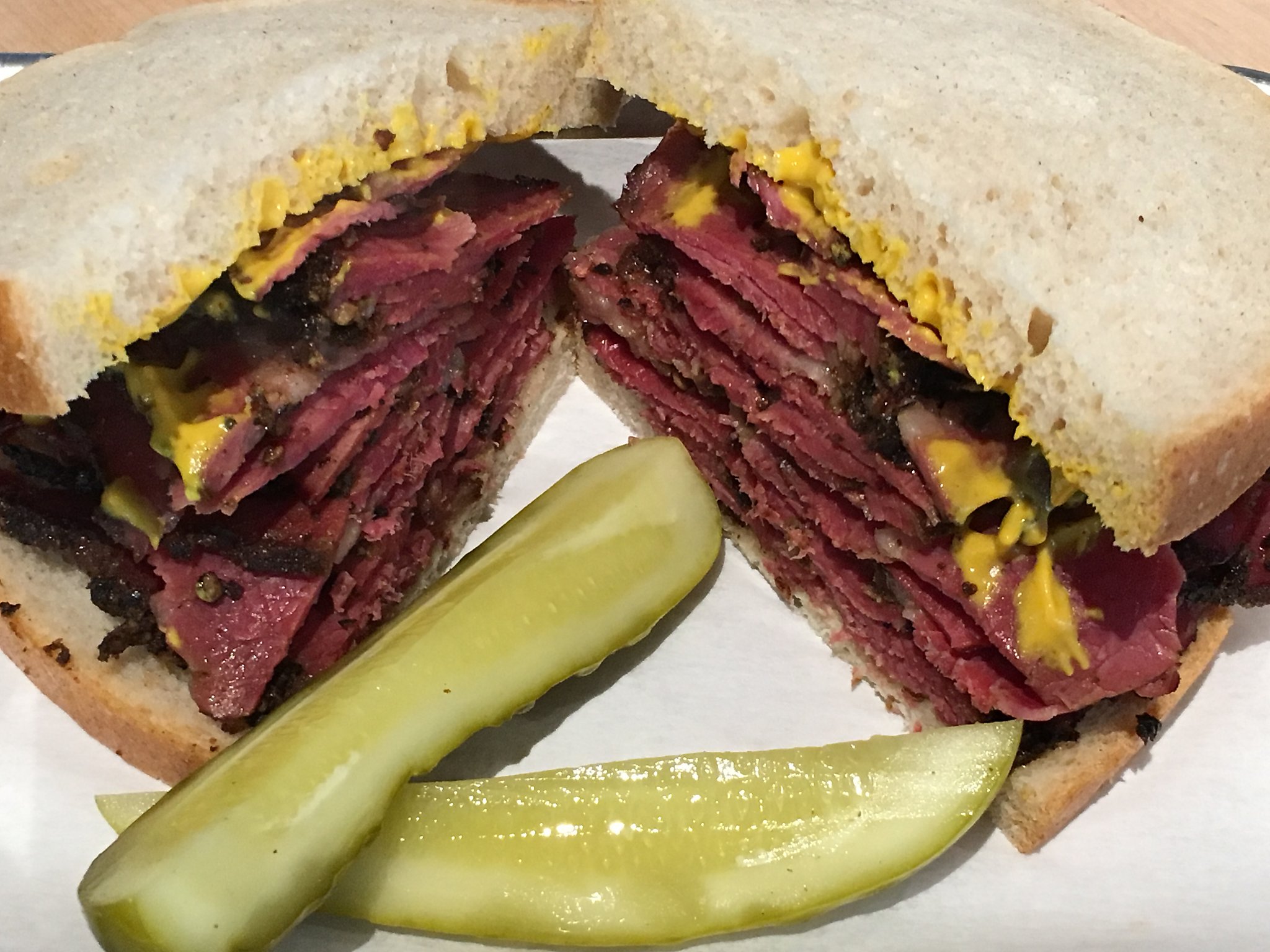 Anyone here had the pop up food? Looks like it is going in just down from Rocket Restaurant Supply. Mouth potentially watering.

It’s not quite pastrami and it’s not quite corned beef — Montreal smoke meat takes the best attributes of both.

I haven’t had it. Sounds good.

I’m going to wait for a weekday lunchtime, to avoid the opening crowds.

Had some at home for dinner. Heated the vacuum-packed meat in boiling water and served with Acme levain toast and red cabbage with leeks and hawayej.

Very reminiscent of corned beef though with a firmer texture due to the smoking. More highly seasoned than most mass-market corned beef: coriander seed, black pepper, I’m pretty sure some whole mustard seed. I tried one bite with Amora Dijon (the only mustard we had around) and it overpowered the meat. Could have been fattier for my taste but it was not too lean. Satisfying stuff.

We went for an early dinner and shared a smoke meat and a turkey sandwich.

The shocker was how much I enjoyed the turkey. I was expecting to like the beef (similar to RL’s description). There’s Gulden’s Brown and regular yellow mustard at the table. Each sandwich came with a pickle (it was ok but not my favorite) as well as a not-creamy slaw, which I liked a lot, as the acid level was great for that meat. Rye bread was fine, and didn’t fall apart. He (owner) was very excited as the beer/wine approval just came through (service to start next week) and he was peeling the thing off the window. Also, some dedicated parking spaces right in front - a big plus over there. Combo plates (1/2 sando, salad or frites, and a beverage) available.

Eager to try other things. Owner was a super nice guy, as were the balance of the staff.

Do not bring your vegan friends here, unless they really aren’t your friends.

The poutine with meat

I went for lunch and decided to try this. It comes in 2 sizes, the $10 regular, or $12 share size. I asked if the $10 was enough for a lunch, and she said yes. It was enough for 2. A big hot bowl of salty goodness came out about 10 minutes later, full of fries that held up pretty well in the gravy, gravy, and lots of smoke meat bits, along with the curds. Very tasty, very salty, and I’d likely not order it again as my only item for lunch, but I’d definitely share it with someone as part of a meal.

I took nearly half of it home. Too good to toss, too much to finish in one sitting. While it won’t be great reheated, I’m thinking of throwing it in a hot pan with a little oil, and then when these leftovers get nice and hot, cracking an egg over them.

That’s what I’d do, except if it’s already greasy maybe I’d use a nonstick pan and no oil. Worked pretty well for some leftover undercooked okonomiyaki the other day.

Ate in. Great sandwich. Not pining for Langer’s quite so much.

I’ll skip the pickle and slaw in the future. Both were way too vinegary for me, I prefer lacto-fermented. Also a little too sweet for my taste.

I went to the two most famous smoked meat places in Montreal.

Schwartz’s, loved the atmosphere and scene, but the meat itself was not on the same level as Augie’s.

Lester’s meat was I think on a par with Augie’s (further research required), but Augie’s has way better bread.

I haven’t been to Augie’s, but I thought Schwartz’s meat was noticeably better than Lester’s. IMO neither are as good as Langer’s, but that’s probably because I grew up with pastrami. I know Montrealers who prefer smoke meat to pastrami.