Chimichurri (either homemade or pre-made)

Any recommendations for a decent chimichurri recipe? If there’s a decent packaged product or herb mix (add oil / vinegar) that is ok, too. (My herb mix stash from Argentina has gone stale.)

Here’s some info from CH including Veggo’s which was pretty famous. I’ve never made it.

This one is really good: 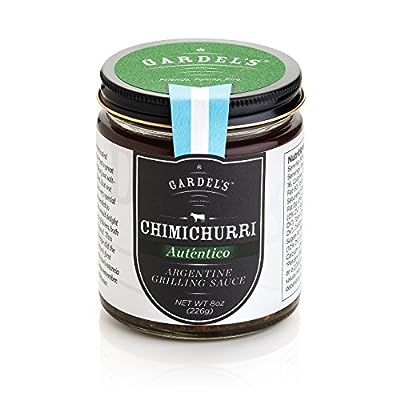 For a very special meal in 1968, Mom needed to conjure a chimi that would delight a demanding group of diners, both refined and traditional. This classic, authentic recipe did the trick, making Mom's ...

It’s from an LA Argentinian steakhouse. Here’s a link to all three products (chimichurri, spicy chimichurri, and aioli)

Prolly more traditional to use dried oregano but I’ve used and enjoy this recipe. http://nymag.com/restaurants/recipes/inseason/58057/

Bring the water to a boil in a small saucepan. Add the salt, and stir until it dissolves. Remove from heat, and allow to cool. Mince the garlic very finely, and put in a medium bowl. (1) Mince the parsley and oregano, and add to the garlic, along with the red-pepper flakes. (2) Whisk in the red-wine vinegar, then the olive oil. Whisk in the salted water. (3) Transfer to a jar with a tight-fitting lid, and keep in the refrigerator. Let the flavors mingle for at least a day, and serve with grilled meats. The sauce can be kept refrigerated for up to 3 weeks (adapted from Seven Fires: Grilling the Argentine Way, by Francis Mallmann with Peter Kaminsky; Artisan, 2009).

I believe traditionally you’d leave it on the counter to lacto-ferment.

The name of the sauce probably comes from Basque tximitxurri ([t͡ʃimiˌt͡ʃuri], approximately chee-mee-CHOO-ree), loosely translated as “a mixture of several things in no particular order”; many Basques settled in Argentina in the 19th century.[3]

There are also various (almost certainly) false etymologies purporting to explain the name as a corruption of English words, most commonly the name “Jimmy Curry”[4][5] or “Jimmy McCurry”,[4][6] but there is no contemporary documentation of any of these stories. Australian chef John Torode essentially attributed the name to a corruption of the English soldiers’ request “give me curry…give me curry,” during Cooks Abroad, a documentary for the BBC.[citation needed] Chimichurri (Spanish pronunciation: [tʃimiˈtʃuri]) or chimmichurri is an uncooked sauce used for grilled meat; it comes in a green version (chimichurri verde) and a red version (chimichurri rojo) and originates from Argentina and Uruguay. It is made of finely chopped parsley, minced garlic, vegetable oil, oregano, and white vinegar. The dominant flavoring is parsley, garlic, red pepper flakes, and fresh oregano. The name of the sauce probably comes from Basque tximitxurri ([t͡ʃimiˌt͡ʃuri], appr...

Michelle Bernstein’s version is our favorite. I always get requests for it when we have people over.

Food & Wine goes way beyond mere eating and drinking. We're on a mission to find the most exciting places, new experiences, emerging trends and sensations.