Have omnivores coming for Christmas and I don’t think I can deal with cooking this year; several restaurant ideas here in Pasadena were declined so now thinking about getting something prepared and just heating here. So far all I’ve been able to find that seems workable is Auntie Em’s in Eagle Rock. http://www.auntieemskitchen.com/christmas2016/

Our constraints: meat and vegetarian options, tastes decent, within easy driving distance of Pasadena, preferably at around $160 (or much less) for four adults. I’ll do the appetizers and desserts.

Any other ideas? I’m seriously not feeling inspired.

This will exceed your budget and isn’t in your neighborhood, but I’m putting it out there - just in case you don’t have too many options. I had a similar situation a few years ago during Thanksgiving. We had the family over for the holidays, but I couldn’t cook because of a dire emergency with our dog that required surgery. We ended up ordering from Joan’s on Third. They were quite efficient and organized when we picked up the meal. The meal was easy to heat up, and detailed instructions were provided. Everyone was happy with the quality of the food.

It has been discussed. I’m not sure I’m there…yet.

Google hotels for Christmas dinner. They have all different price ranges.

One of my brothers did this for Thanksgiving (he had one toddler, a new 5-month old baby, an exhausted wife, and two doting grandmothers staying with them). He said he’ll never cook another holiday meal again.

From the OP (emphasis own):

They have a BH location also. Half an hour in LA is easy to me!

Honestly, you have stepped up and are hosting. If someone else is invested in having a fancy meal, they would offer to host Christmas.

How about Whole Foods? It’s good, convenient, has lots of vegan side options, and you can also pick up a Tofurkey, if you’re so inclined. Just remember, you are being kind just by doing this. You don’t have to be perfect!

We ended-up going out for Christmas Eve and Christmas dinners.

The restaurant was warm and lovely, with wonderfully dated and yet classic holiday decorations.

We (the four of us) were, unfortunately, seated in one of the half-circle booths: not terribly comfortable and not conducive to conversation, but not worth raising a stink over, either.

Had one of the delightful older male French servers, who was enthusiastic, helpful, attentive, and wearing a necklace of flashing Christmas lights.

I think the others had half a carafe of wine; I opted for iced tea.
Hors d’ Oeuvres:

All plates were cleaned; the skate was remarkable (I’d not tried it before - my partner was very happy) and my risotto was very good but also very standard - and there was a lot of it. (I love risotto, but in much smaller amounts!)

I’ve no idea of the final bill; in looking at the prices on the menu, I think the prices are a bit high, especially for the risotto, but that may be just me.

Christmas Dinner was at Mint Leaf: 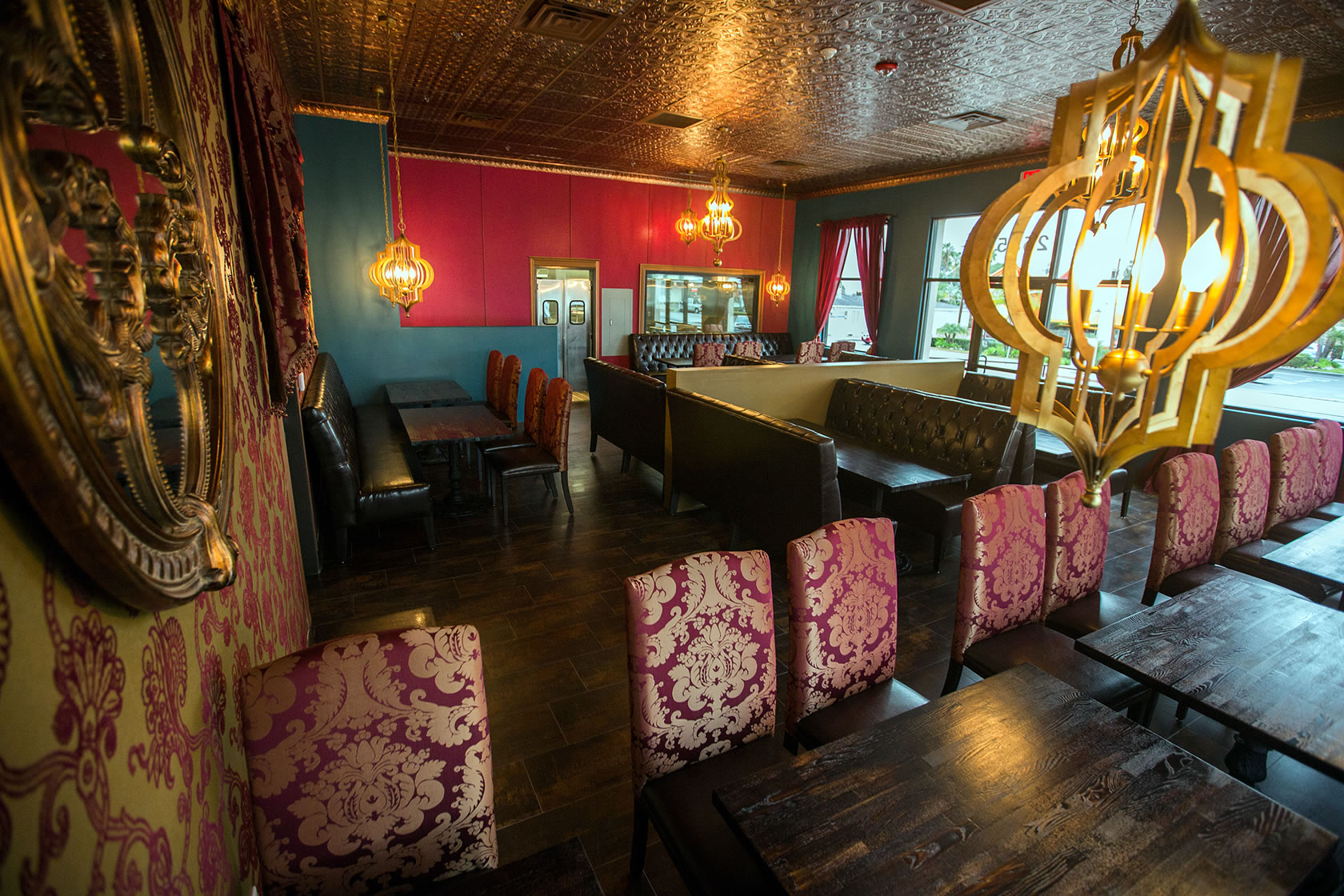 Unlike any Indian restaurant experience, Mint Leaf Pasadena offers an elevated and fresh take on traditional Indian fare, with an inviting and decorative ambience.

The small room has wonderfully high ceilings and I love the colors and decor.

(All descriptions from the online menu.)
Appetizers:

Plus breads and two types of rice.

The good: as always, much of the food was very tasty. We ordered everything “mild” in terms of heat-level and that always affects the overall impression of the dishes, but everything was enjoyed.

The not-terribly-good: the booth benches are breaking down and we were all uncomfortable throughout the meal. Also, we were seated near the door - it was cold that night and every time the door opened (which was frequent), we were hit by a cold blast. There’s no real place for people waiting to be seated, so the latter third of our meal meant people staring at us eating.

Other issues included one of the appetizers arriving about 2/3rds of the way through the meal (the tandoori mixed veggies) and being cool when delivered to the table.

Our server was initially very attentive and then was given a large table and became difficult to track down.

My main issue with Mint Leaf (and it’s been a constant thing for me since the place opened) is the QPR. (With the full acknowledgement that QPR is a very personal thing.)

In general, the food is very good, based on my limited experience with Indian cuisine. It’s less oily and “cleaner” tasting than many of the other local Indian restaurants we eat at. BUT…I think it’s over-priced in terms of location (it’s in a weird area of Pasadena, at the top of Altadena at Washington Blvd) and, moreso, for quantity.

Maybe it was the “B Team” in the kitchen (as far as the taste issues are concerned)?

Maybe I need to adjust my expectations of the QPR for the place? I don’t know.

(As a side note, the hostess spent a lot of the time we were there staring at her cell phone screen and not answering the restaurant’s phone - again, possible B team on that night?)

Guests said it was the best Indian they’d ever had - and visibly winced when they grabbed the bill. I actually felt badly that they grabbed it, due to all the issues we had with the meal.

So…a mixed experience for the holiday weekend, but no food poisoning, excellent company, and some wonderful tastes.

I can live with that

I was once at a repast in the the big back room of Taix and took a cruise thru the main rooms. You pretty much described my impression. It was a little dated and the waiters seemed like they have been there for ages, which adds to the charm. The food did seem marvelous. Too bad it was a little overpriced for what you got. That’s Christmas. Restaurants definitely try to maximize the extra bookings.

Yikes about Mint Leaf. You should send the manager an email. The pictures look sweet, deceiving I guess. I’m looking forward to asking my sister her impressions. She’s been an India loving, vegetarian Altadenan pretty much my whole life.