I’ve been driving past here daily, watching it get ready to open (looks beautiful), and now it’s open. I’m dying to go, who wants to join me tomorrow (early)? I love grilled everything, and the photos in this LA Weekly article make me drool:

Chef Josiah Citrin gets two days off a week from his Michelin-starred fine dining restaurant, Mélisse, and on those two days you'll often find the L.A. native at home, grilling meats and vegetables on his Big Green Egg charcoal grill for family and...

I saw that earlier.

So far only a few photos on Yelp w/ 4 reviews. All 4 reviews are 5 stars.
The menu looks good…but the prices, not so much.

Menu is at this link… 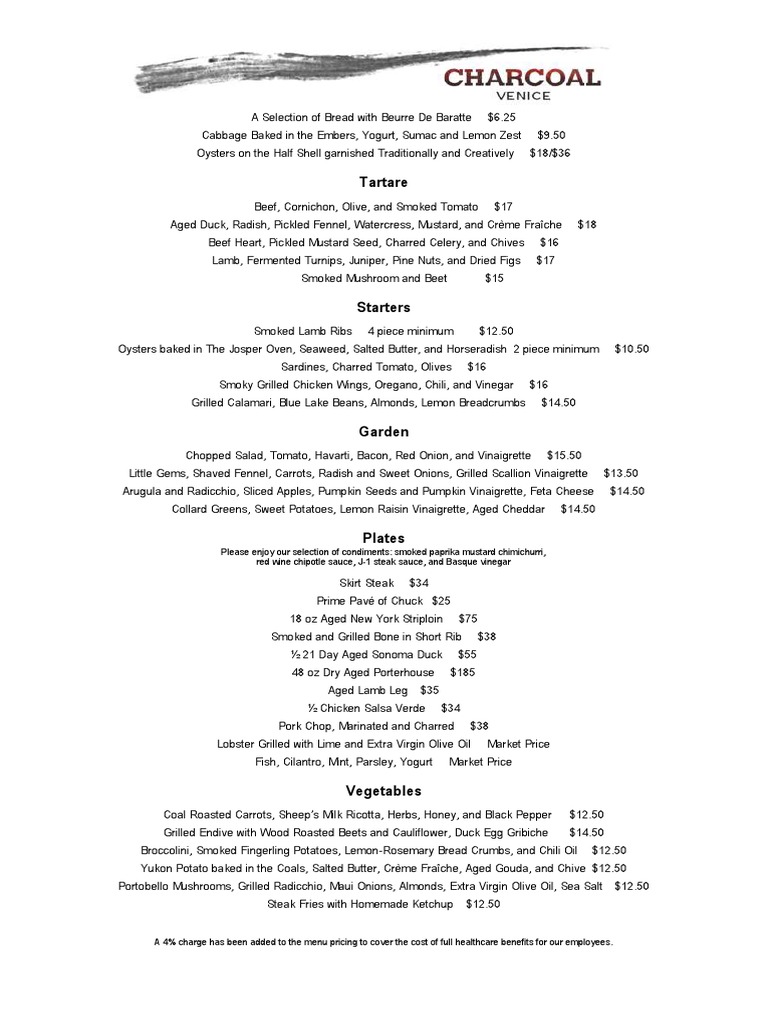 LOL 12.50 for steak fries and ketchup

a pricey menu for sure but it all looks pretty darn tasty to moi.

That’s what I’m wondering, too.

[QUOTE]a pricey menu for sure but it all looks pretty darn tasty to moi.

If Maple Block can get away w/ it (I find that place to be VERY pricey), then I assume that Charcoal can, too…

With these prices, call it Smoky & the Bandit.

Went tonight thanks to this post. Thanks yogachik.
Awesome.

Will post more deets later but we loved it.

I wanted to go last night, but went to see X at the Roxy, which meant dinner at the Rainbow. I could go on, but won’t. Tonight’s my first free night since Charcoal opened. Was it crowded @CiaoBob? Can’t wait to hear about your meal.

At 8:30 when we arrived at Charcoal the tables and booths were about 85% full, the bar was 110% full with lots of peeps watching Packers/Lions.
By 9:30 the bar and table were about 50% fulls. Our waiter informed us that - at least for now - their intention is to keep it very open to walk ins by only reserving a relatively small amount of the restaurant on any given night. Can’t remember what number something like 60-70% will be reserved but the rest open, so it seems like it won’t be too hard to get in.
I will highlight the food this weekend - everything was spot on.
The ceiling is a marvel for sound dampening. No idea what it is but it works. Every loud place in LA needs to check it out.

Here’s a link to the menu
http://www.charcoalvenice.com/menu/dinner-menu/

Forgot to image dish #1 - Cabbage Baked in the Embers, Yogurt, Sumac and Lemon Zest $9.50
It was yummy and went great with the Basque vinegar, as well as the accompanying yogurt.

Collard Greens, Sweet Potatoes, Lemon Raisin Vinaigrette, Aged Cheddar $14.50
Really great, very tender collards went well with the sweet potato and cheddar. For us, the raw onion was a bit over-powering but not a lot.

Aged Lamb Leg $35
Sorry - bad image - we jumped into it too fast. As above, loved the marrow. Also went great with the homemade chimichurri.

Cannot wait to return with a larger party to try more.

One more shot - the cleaned marrow cavity of the lamb bone -sticky fingers and all.

I dropped by Charcoal finally a couple nights ago. Really funny restaurant in the sense that the reservation spaces were 100% full, and looked completely booked. So it must be very hard to make a reservation. But the walk-in spaces never filled up the whole time I was there. I had an 8 person communal table entirely to myself for 2 hours.

Anyway, in general I thought that all of the dishes pretty much lived up to Citrin’s notion of “craveability”. They all tended to have a kind of subtle, craveable feel. Not overly complex food, but just simple, and highly tasty. Salt plays a decent role in the cuisine here, which I am absolutely sure some people will find horrific. I personally enjoy salt a lot, and found that it was usually appropriately balanced (for example, the intense bursts of salinity from seasalt in the cabbage balanced by the creaminess of the lebni alongside the cabbage).

It was a very pleasant, and relatively healthy meal. The aforementioned cabbage was almost impossibly delicate, yet still firm, aside from the salt and the char and smoke slightly imparted to it by the ember roasting, it tasted very much of excellent cabbage. Ingredients are highlighted in the dishes at Charcoal in much the way that they usually are at places like Melisse, but the dishes are just in larger formats. It really does come across as if a michelin starred chef that usually works with tweezers is cooking for friends and family in his backyard, which, as I understand it, is precisely what this project is.

For me, the half chicken was something I just really wanted because the photos on their website make it look incredible, and I had to know how chicken could possibly be justified on such a menu. It was one of the most eminently craveable chicken’s I’ve ever eaten. I kept asking them to divulge some kind of secret to it, some marinade, or sauce, or spice or something. But supposedly it’s just salt and pepper, and care in cooking + butchering skills. It still kind of mystifies me. On the one hand, it was just chicken… perfectly crispy skin, tinged with smoke and salt, over meat imbued with the essence of fire. It’s the kind of dish that is so simple as to be stupefying. I almost feel guilty for enjoying it so much. The meat itself was not oozing with juice, as seems to be the current trend in most places preparing high-end chicken, but I myself don’t prefer my chicken to be wet, and Charcoal’s version was not dry, but met perfectly in the middle of being moist, and having just a bit of chewy bite to it that I love in chicken, but never find, as most preps leaning in that direction just produce dry, flavorless chicken. Perhaps I’ve just been deprived of great chicken all my life, and as an incapable home cook, this chicken baffles me in a way it ought not, but I have a hard time believing anyone would not enjoy the chicken immensely.

The salads are worth looking into here as well. The collard greens and sweet potato salad with lemon-raisin vinaigrette was one of the most delightful salads I’ve ever had for my tastes. Highly unusual to see shredded collards, but their heft and chew balanced against delicate puffs of sweet potato worked marvelously well, and the dressing was addicting, without being overpowering. The salad section should not be ignored here.

Lamb ribs were smokey, tiny morsels of meaty goodness. They are aged just like the rest of the lamb at the restaurant, which apparently takes the gaminess of the lamb away. So they taste rather like mini-beef ribs to me, very tasty, easy to get addicted to, and joyfully messy.

The Josper baked oysters were probably the only slight letdown for me. Salty, buttery, crunchy…lukewarm temperature perhaps through me off? I think you’re probably better off eating the raw oysters, but they seemed interesting, so I thought I would give it a whirl.

Dessert rounded things out pleasantly with a very subtle popcorn sorbet over a truly delicate banana bread, and beautiful shards of salted caramel brittle, which I found much more enjoyable than the usual salted caramel sauces one finds around town.

Overall, a rather exceptionally enjoyable place. Cocktails are also quite good, and the wine list isn’t bad either.

I will say that the experience is intensely costly though. I did over order a bit to try more dishes, but not as much as one might think. All told, for the food only I spent $115. I suppose if it had been split between two people successfully that would have made it only about $55/person, which would make it incredibly reasonably priced though, but you probably would have wanted a bit more food for two people I suspect.

Still, quite an interesting new opening. They just put 21 day aged duck on their menu btw, which I believe would be incredibly fun to try.

Thanks for the great report.

I’m always looking for a great roast chicken, this sounds fantastic. It looks like they deboned the chicken for you from the pics? (which is fine, just curious.)

Between @CiaoBob and your report I might have to swing by.

What was the damage BTW? Thanks.