Whose taking one for the team?

an amazingly perfect 5* on yelp with 78 pictures. 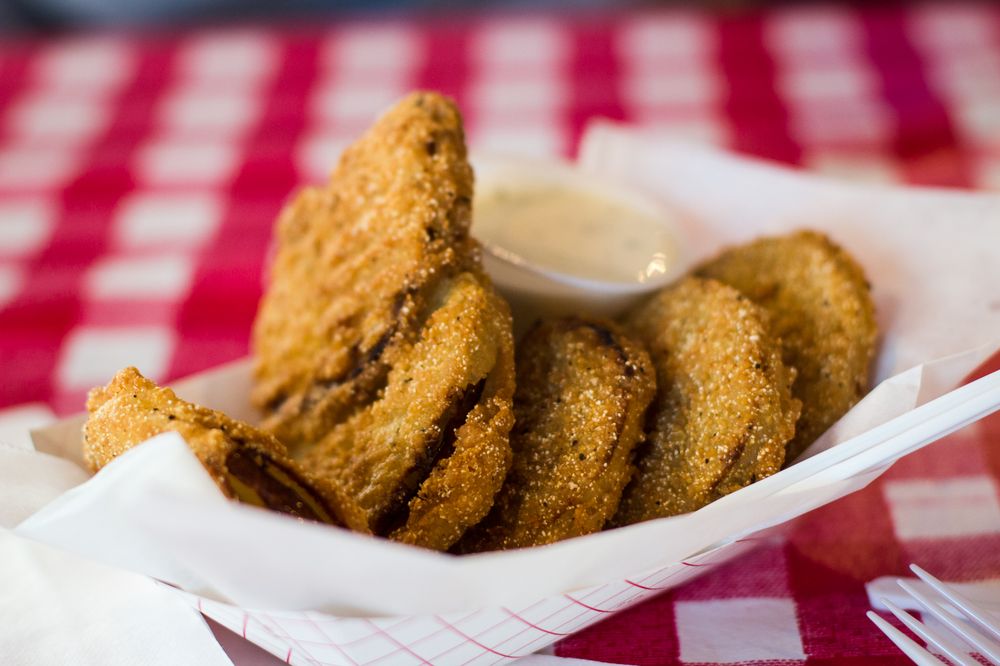 Specialties: We Specialize in One Thing: Chicken Established in 1984. Walk into a Gus's World Famous Fried Chicken, and you'll find walls adorned with vintage and neon signs, beloved classics humming in the jukebox, tables covered in blue…

hate the reviews or not, the pictures don’t lie.

The chicken does look pretty freaking good. I don’t believe half the review on Yelp but from one of the elites

“Gus’ has some of the best fried chicken I’ve ever tasted, they use hormone free, never frozen chicken, fried in peanut oil, the best of the best.”

No crazy lines like Howlin Rays and not silly expensive like Brentwood or Bouchon. Plenty of room for good fried chicken in LA to balance out all the juice bars and farm to table joints.

I stopped by and picked up a two piece dark meat snack to eat in my car. The chicken has a nice spicy bite to it but it’s not overly spicy. The batter is not so thick that it explodes into your lap. It was super hot and juicy and delicious, really delicious. I’ll go again this week to eat at the restaurant and try some sides too.

Great addition to LA, can’t wait to try it!

I love that it is on Pico X Crenshaw. LOL at Eater LA confused about why they would open in that location.

Heading over to Mateos seems natural after a meal! I been meaning to visit Pasta Sisters, guess I am going to be stuffed

The chicken has a nice spicy bite to it but it’s not overly spicy.

I’d say a 3, I like spicy and can handle a lot spicier, however, some people will find it too spicy.

Been to the one in Austin.

To me it was like Popeye’s with a bit more spice.

I was kind of surprised by this claim as well. I figured they would hang their hat on being old school Southern fried chicken. Not that those two can’t mix but at their price point I am surprised.

Just wait for the fried turducken. Then it’ll be inhabited…

Decided to try this. Seems So Cal’s getting a bunch of things opening in waves. Mesquite Taco places. Fried Chicken places and more.

Gus’s Fried Chicken seems to be a “world famous” (from their website) export originating from Mason, Tennessee. Unlike some of the other Fried Chicken specialists recently, this is a well-established operation, with 15 locations in 9 states, and franchises for sale to expand.

Talking with their manager, Gus’s fried bird is not the same thing as “Nashville Hot Chicken” (ala Howlin’ Ray’s), but it’s a gentle heat. Also unlike Howlin’ Ray’s or other spots, there is no option: Gus’s only serves Spicy Fried Chicken (no Non-Spicy option).

Their parking situation is kind of tough: Located on the corner of Crenshaw and Pico, their back parking lot (only a few spaces) are all reserved for Take-Out Orders Only. Crenshaw itself has no immediate street parking right next to the store (and it’s a busy intersection).

This tastes pretty mediocre. It’s overly sweet(!), not very creamy and tastes a bit mass-produced. A far cry from the awesome freshly made Potato Salad at Howlin’ Rays and Wexler’s. I wouldn’t order this again.

This tasted pretty straightforward. A standard semi-cheesy, semi-creamy Mac & Cheese. Not as good as the fragrant Nacho Mac & Cheese at Howlin’ Ray’s. But it’s not bad.

This was just too sweet (kind of off-putting). It tasted like a pretty generic / mass-produced version of Collard Greens. Definitely not as good as Flossie’s variety of Greens back in the day (they had 3 - 4 different choices and they were all better than this).

Their menu claims they use “natural, hormone-free chicken” fried in Peanut Oil. Then again, mega producers like Foster Farms use the same claim, so they could just as well be using something like that. I couldn’t taste the difference (unlike at Howlin’ Ray’s or even Honeybird, where the Chicken really does taste brighter, fresher).

Starting with their Fried Chicken Breast, the batter is very thin. It doesn’t have the awesome crunch or crispiness of Howlin’ Ray’s (not even close). After having tried all 4 sections, my friend and I both agreed with @ipsedixit: It’s like a better version of fast food Fried Chicken. Although maybe more like Pioneer Chicken than Popeyes (except for the spiciness).

The Chicken itself is still moist (thankfully), not overcooked.

The Fried Chicken Wing is a touch overcooked.

Their Fried Chicken Thigh and Leg are juicy, but all the pieces are bit too salty.

And as noted earlier, all of their Fried Chicken is served Spicy Only. There is no option to have Non-Spicy Fried Chicken.

The spice level feels like about a “Level 3 Medium” from Howlin’ Ray’s except nowhere near as nuanced. This just tastes like a lot of Cayenne Pepper for an immediate, light burn that goes away quickly when you stop, but you feel it when you eat it.

Lastly, after the meal we both felt like the meal was really greasy and heavy. None of my friends I’ve taken to Howlin’ Ray’s feels like that (nor when we used to hit up Flossie’s).

Their Baked Beans are overly sweet, and very much like the stereotypical “Baked Beans” you find in a bunch of places.

Their Slaw is also not very noteworthy. Very standard, watery mayonnaise like dressing.

Gus’s Fried Chicken feels like a spot to hit up if you can’t get to the awesome, handcrafted goodness of Howlin’ Ray’s Fried Chicken, but you just want something to scratch that itch. It’s nowhere near as compelling, interesting, nor as crispy / crunchy, nor as nuanced as Howlin’ Ray’s.

I’d definitely get Gus’s before having to resort to national fast food Fried Chicken. It’s tasty, but the seasonings and overall experience don’t make me crave it the way I used to crave Flossie’s (when they were good), or Howlin’ Ray’s.

How does this compare to the Krispy krunchy?

[quote=“tailbacku, post:3, topic:3587”]
Is everyone jumping off the poke bandwagon and eating fried chicken now?
[/quote] Actually, I was a little worried for restaurateurs who put all their eggs in the Poke basket. But, also surprised by the Fried Chicken resurgence. It’s L.A.! We’re supposed to be health conscious. Maybe Poke is a delicious item on a restaurant menu. But as a whole concept, it is definitely not taking off.

The “hormone free” testament is a con. It’s illegal to add hormones to any chicken in the U.S.

Go on! We can always count on @Chowseeker1999 to break it down. The diversity of the places you go still amazes me though.

For these old school type joints, the sides have always been generic. Usually nobody cares. They are not actual soul food spots. Their star attraction will be fried chicken or BBQ. But in this case it appears the star attraction falls short!

How does this compare to the Krispy krunchy?

Good question. Krispy Krunchy is, per the name, much crunchier and has a much thicker batter than Gus’s. The Krispy that I tried at the Fox Hills Mall had potential but was too salty (like way over-salted).

So in that respect Gus’s is less salty, but still more than the more handcrafted places like Howlin’ Ray’s and Honeybird and Birdies.

10 posts were merged into an existing topic: Where is the Poke?

Thanks for taking another one for the team Chowseeker. Considering I haven’t had the chance to make it to Howlin’ Ray’s yet Gus’s is definitely not at the top of the list.

Have you had Honey’s Kettle before? Is Gus’s in the same stratosphere in terms of the fried chicken?