We were running a little late and our Lyft driver took us on a scenic tour of the hills before reaching our destination. In other words, he got lost. We were hungry and opted to start with food. Also available was http://kronnerburger.com We went with Sushi.

Let the Sake begin! With the Sake tasting area being a little cramped and hectic and the food in separate sections we decided not to complicate things with food pairing. Hubby just grabbed a couple of pours from somewhere (don’t know where) to sip while we ate. Basically we threw down then got to the drinking. Since it was our first Sake Festival I’m afraid we didn’t follow much of a strategy @beefnoguy (like sampling the nama sakes last). We had particular booths and Sake we wanted to try, but other than that we just went with it.

This lovely Sake has a quick fruit burst then a gentle, faint, elegant finish. Very enjoyable.

image1212×617 431 KB
Hands down my favorite of the three. It supposedly drinks like a Junmai Daiginjo but Idk enough to tell you that, just that it’s really enjoyable, bright & fresh w/a slight sweet nose and flavor.

image1215×735 117 KB
This might not be the Sake I actually tasted, although my hastily written notes say so. I got dry, ocean, seaweed, umami, which doesn’t correspond with the limited professional tasting notes found online (brown sugar, earthy, acidic), so…

Apologies for the internet photos. The booth was pretty packed and sipping was the main priority.

The rep holds true - Jesse Puglach of Fifth Taste is a great guy, friendly & genuinely enthusiastic about their products.

3) Having fun with Kerry Tamura of World Sake.

An accidental photo but I thought it was kinda’ cool…

Kerry-san’s World Sake stand was in a narrow space and busy with fans, well-wishers & the curious.

B) Tedorigawa Yamahai Daiginjo “Chrysanthemum Meadow” is really interesting - forward & rich but smooth, herbal & minty but low acid and balanced. I want to spend more time getting to know this one.

C) Masumi Okuden Kantsukuri Junmai “Mirror of Truth” - I got woody first, earthy, maybe floral, but no berry as described. The acidity kinda’ vibrated in my mouth.

DJ Jihaari Puttin’ it down… 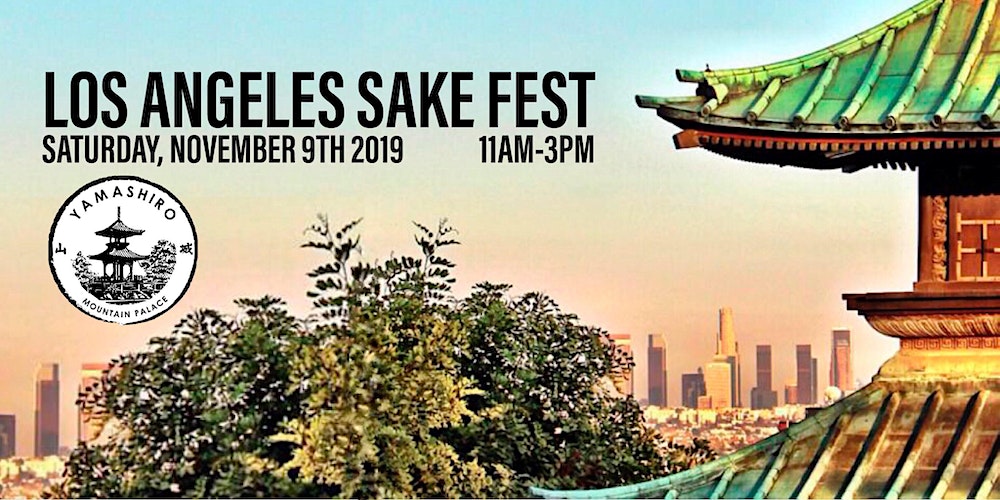 Apologies for the delayed report. November is a big birthday month in our family (just call me the scorpio whisperer). Plus, I managed to squeeze in the planning of a little baby shower/sprinkle and of course, Thanksgiving! Hi, my name is Julie. I’ll be your cruise director.

Bravo, thanks for this in depth report on what appears to be the first ever major annual sake event for LA!

I’ve heard that the success and turnout has lead to the planners thinking about Kanpai LA 2020, so this is great news for all of you! (For those planning ahead, last weekend of September / closest weekend to Oct 1 is Sake Day San Francisco, a month+ before if you want to hit both).

I thought they were selling handrolls at Yamashiro for Kanpai LA…I guess it was easier to have the robot churn them out instead.

That’s kind of interesting/wacky to have Enter Sake include a tasting of one of their bottlings of Heiwa Shuzo, along with Fifth Taste’s two Heiwa Shuzo Kid offerings. Enter Sake is a label created by Richie Hawtin (famous electronic musician) where he partners with various sake breweries and bottles the sake under his own label. Unclear which version “Heiwa” is from Heiwa Shuzo.

Too bad I didn’t know what Sake Tengoku was pouring. I would have had all of you taste Tsurunoe “The General” (probably their Junmai)…Tsurunoe is the name of the brewery (Fukushima prefecture) and “The General” is the label name Aizu Chushou (Aizu Wakamatsu is the area to the west in Fukushima prefecture where there is a concentration of great sake breweries) and it’s fantastic (had it recently with fatty hikarimono sashimi like saba, iwashi, sanma with stellar results).

Also Mutual Trading’s Senkin Shuzo, those are super interesting sake and the pricing is ridiculously low for Junmai Daiginjo level.

This event looks like great fun! I hope to join next time

I was only a little surprised the rolls weren’t by hand. Based on ticket sales they must’ve decided it wasn’t prudent. They were busy. It was the first time I’d seen a sushi cutter in action, so that was kinda’ cool.

Yep, as you can see the actual lineup differed a little from the original lineup posted. Afterward, I was sorry to have overlooked or missed a few interesting booths - both known and ones we didn’t know we were missing.

But this was a good starter kit. We are definitely open to going to Sake Day SF next year if plans align. We’re still hoping to do that postponed road trip!

Thanks again for your guidance! Kanpai!

Hand pressed hand rolls, as in using a human hand to press a button to operate the machine

What did you special order from this event?

Haha! The most important thing is the the great sushi we’ll be eating with our bottles. Ahhh, now that’s what I’m working on. We didn’t order anything at the event. Too tipsy (no sipping and pouring for us) and I wanted time to look at my notes and process then order from DomaineLA.

Any suggestions from something we missed or maybe something we should give another try? Something ocean, seaweed, soy, umami?

My friends and I are interested in tagging along next year with you, @TheCookie. I think I may have already convinced them to do Sake Day in SF, too. I may just ask @beefnoguy to lead the way so we can learn from his tutelage.

I think I may have already convinced them to do Sake Day in SF, too. I may just ask @beefnoguy to lead the way

OMG! This would be so fun!

You will have to call Domaine LA and see if they can still special order Kanpai LA event sake for you, it’s up to them now.

The order taking is only at these events? Tasting, memorizing, note taking while drinking was all I could handle without it becoming a job. I was under the impression attendees could order thru DomaineLA later. Wish me luck!

I really have no idea, but highly recommend you call anyway for peace of mind, confirmation and to let others know in case they want to do the same.

The reason is this: some distributors/importers have a minimum order (e.g. one case usually 12 bottles) for any retail business. Some will allow retailers to buy single bottles (no minimum). If Kanpai LA was a success and there were a lot of orders, it would make it worthwhile to gather all those orders and process them in at once.

Don’t forget Jesse is based in San Francisco. Let’s say you special ordered a few from his portfolio. He or an employee of his will have to make a special trip down to fulfill the order. That will depend on whether his group also needs to make deliveries to fulfill orders by other restaurants/retailers in LA/SoCal…it could be just a matter of timing. Or it could be one particular item is on backorder and needs to wait for new shipments to arrive from Japan. Or one item is stuck deep inside a warehouse storage and requires digging to look for it.

We as consumers usually don’t worry about these details, and just get a “yes” or “no” answer for special requests/orders…but this is what actually happens behind the scenes.

Okay, gotcha’. I am not experienced with this but it makes perfect sense. Rookie mistake. Plus November was cray cray. My line all month was “I’m not a pulpo, you know!” I figured I had time. DomaineLA closes early on Sunday but I sent an email and will call tomorrow. It will be a bummer if I get a No. I can probably get some of the World Sake offerings locally but I really want the Brooklyn Kura & one or both of the Heiwa Shuzo KIDs.

I got this from DomaineLA

We can certainly look into special orders for you, but there may be an associated cost with bringing in small quantities of some items from the distributors. if you could fill out the attached form for me, I can take a look for you.

I’m going to give it a whirl and see what “may be an associated cost” means. Note to self… next time pull it together and order at the event. No regrets! We did pay for the experience and had a sake ball!

Yucho Shuzo Wind Of The Woods (this is unfiltered undiluted unpasteurized)

Kimura Brewery both bottles, though the Junmai Ginjo could be a touch more fruit forward

And all the selections from Skurnik especially the offerings from Niizawa, if you want to experience the power of a true food sake (think of food wines) buy buy buy and in multiples!

Oh nice. Well, I might just have to “buy, buy, buy” if I want to keep the “associated cost, cost, cost” down.