Plenty available at Gelsons in Silver Lake. But you’re going to pay for it. $19/lb.

Ouch! Did you happen to buy any? Are they super sweet?

I’m not rich enough to pay $19/lb for strawberries

I just looked at Morihiro’s menu to see if it’s been updated. Omakase at your table (maybe prepared by helpers rather than Mori-san himself? I don’t know): $250. Omakase at the counter, in front of Mori-san (and presumably prepared by him): $350-400!!

Has anyone been lately?

That’s crazy. I remember being able to do omakase at Mori Sushi for $150. How times have changed.

I also remember unleaded gasoline at $1.55 a gallon.

It’s $300. However, the Sergio factor is very strong with this one! 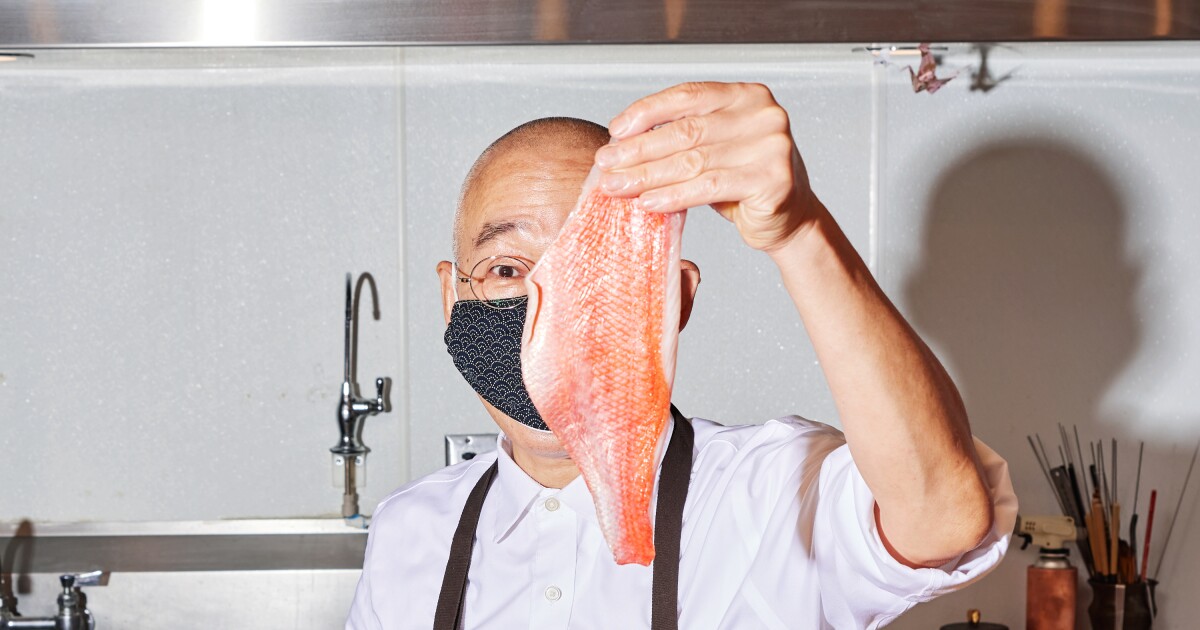 This Atwater Village sushi bar is what L.A. fine dining is all about

Warrior: We had omakase dinner (hybrid kaiseki/sushi) and sake pairing at the counter. It was our first time eating at Morihiro; I used to eat at Mori Sushi regularly, both before and after Chef Mori left. While I think the food tonight was obviously very good and merits one Michelin star, I wasn’t impressed given the price (highest in LA?). A $400 per person meal, before any add-ons, had better be very good. Comparing this meal to recent meals, my opinion is that Hayato offers much better kaiseki and that Q offers better sushi. It’s difficult to explain all the nuanced reasons for these conclusions, and I won’t try to do so. On the positive side, I did appreciate that all three assistant chefs at Morihiro were women. I can’t remember seeing a female chef at any Japanese restaurant — either in Japan or in America — other than n/naka.

Peony: This restaurant has only a few counter seats, and we were lucky to finally get a seat there tonight. I was very happy to see so many female chefs working there. It was also really cute and special that Chef Mori made all the pottery himself. The ingredients tonight were very good quality and well-prepared. Chef Mori took the rice seriously, and the waitress kindly showed us the machine they use to make white rice from brown rice. I liked that they used the leftover rice bran in their cookies (one of the dessert courses) and that they even gave us rice bran as a take-home goodie, which was really sweet. Compared with the sushi I had in LA so far, maybe due to my lack of experience in Japanese food, I can’t really tell it apart from the other high-end sushi places that are much cheaper.

t’s difficult to explain all the nuanced reasons for these conclusions, and I won’t try to do so

If you were willing to do so, I wouldn’t reading it. I don’t know much (anything?) about high-end Japanese, so it would be educational for me.

Compared with the sushi I had in LA so far, maybe due to my lack of experience in Japanese food, I can’t really tell it apart from the other high-end sushi places that are much cheaper.

And b/c I don’t know much about high-end Japanese, this kind of takeaway is actually very helpful.

Warrior: Hello @paranoidgarliclover! I think the biggest difference is that I found Mori’s rice softer, cooler, and, I believe, in greater proportion to Q’s rice. Mori’s rice coated my mouth, whereas Q’s rice maintained a firm, stimulating presence (like the sensation of a brush with lots of firm, pokey bristles). I think that Mori’s rice “cushioned” the topping, whereas Q’s rice “presented” the topping. As a result, I think Q’s sushi more sharply displayed the subtleties of each piece of fish. That’s the best I can do! I don’t claim to be a sushi expert.