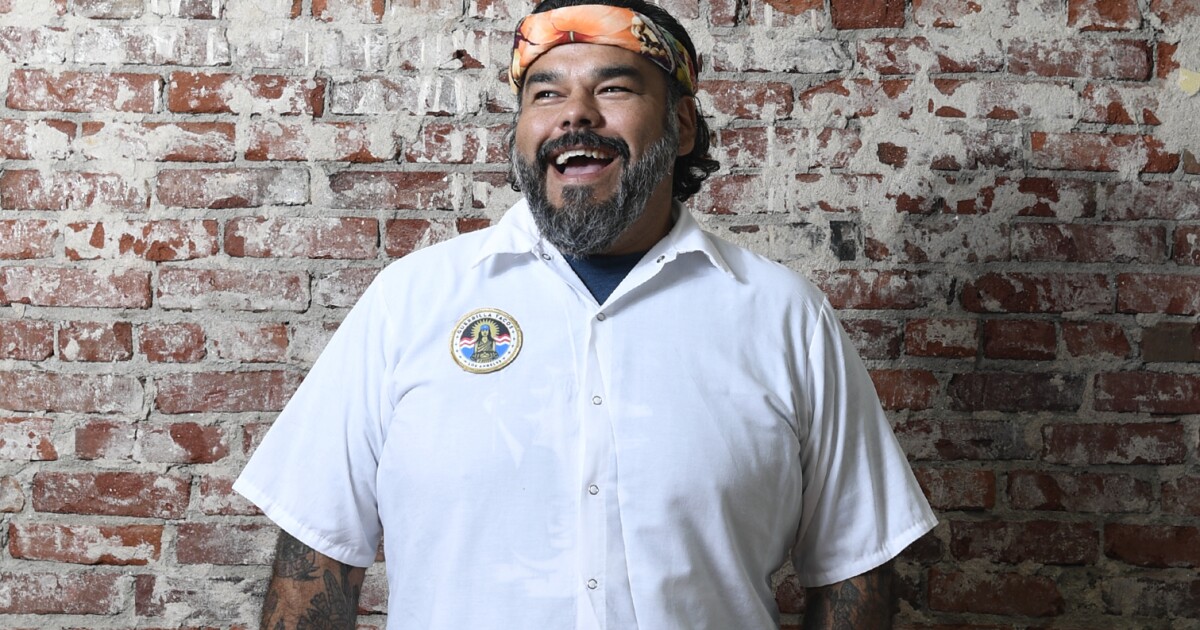 A new project from chef Wes Avila, with a Yucatán Peninsula/Mayan Riviera theme, is scheduled to open next month in a 5,000-square-foot outdoor space in Hollywood.

Really looking forward to this spot.

I am excited for this place too

Inside what might be the most gorgeous new LA restaurant in a while, and with food from star chef Wes Avila to boot

Tho I have to say, to me the menu doesn’t read yucatecan specifically, they just have cochinita and some jungle plants. Seems more like straightforward GT x AE menus to me.

A new restaurant from the chef who created Guerrilla Tacos.

image1920×2560 310 KB
!
Been a fan of chef avilas cooking since his old cart/truck at guerilla tacos. We absolutely enjoyed his brick and mortar taco omakase when they first offered it and where he was cooking in the restaurant.

Ka’teen is a beautiful space that is almost entirely outdoors. Very reminiscent of the new age high end restaurants located in resort cities in Mexico, like Acre in San Jose del cabo. Super tropical and trendy club vibe with loud electro lounge music playing. But I would say that is def one of the best outdoor spaces in the city.

We started with the sea bass ceviche. Which is more of a cured ceviche that you find at mariscos jalisco or a road side stand/truck selling ceviche as opposed to Holbox. Delicious and refreshing reminded me of a small stand I ate at in punta mita. Tostada was airy and crisp, maybe they air fried it instead of deep fry?

We continued with a nopales salad which my partner loved but which I thought was ok.

Finished our starters with the squash blossom and blistered tomato open face quesadilla. Flavors were on point but it was neither a quesadilla nor a tlayuda, but more akin to like a flat bread pizza.

Lamb neck Barbacoa was fatty and tender. The tortillas provided were much much better than the ones we had at Damian. I wish there were some more condiments but only came with pickled peppers, carrots and one salsa. Definitely needed some additional heat or acid to complement the fatty lamb.

Hen of the woods mushrooms with mole were also very good but I wouldn’t call the sauce a mole. Papa bravas were also tasty.

Our server was exceptional and highly hospitable. The drinks were refreshing but most of the cocktails had tropical fruit which leans them all more to the sweeter side. Between the two of us we had four cocktails and they all tasted like some iteration of margarita even though they were supposed to be different.

Chef Avila isn’t doing anything mind blowing and I feel like his offerings at guerilla tacos were much more refined. He seems to be really just doing Mexican inflected dishes that have a lot of familiar flavors for angelenos but they are all very well executed.

So if you’re up for a good meal in an amazing setting with a Hollywood vibe definitely worth checking out. I liked the food more than Damian but less than Holbox.

One thing to note is that they didn’t check vaccination status.

thanks, had been waiting for a report. bummer on the vax check, it’s such a cursory small gesture that I’m always puzzled when it isn’t don.

I was there last night as well. Don’t think we had any of the same dishes so will share my thoughts. After some starters we pulled the plug on more food/entrees bc it just wasn’t working for us. Regret not getting the lamb neck though.

Kanpachi crudo was underseasoned. Had a soy ish thing going on, but needed a fat/oil and maybe some citrus to round it out.

The tuna aguachile was fine, though not spicy. To be fair it’s probably a tough needle to thread, making aguachile for the that crowd.

Scallop Ceviche Tostada was closest to working, but the scallops were ice cold (5:30 reservation) and again under salted.

The potato taquitos were bland, not as rich or comforting as the Guerrilla Tacos version. Tacos Fritos suffered from basically the same problem, though I did like the puffy shells, almost like fritanga you’d find in Pinones in Puerto Rico.

The vibe is definitely fully realized and very Hollywood, though as an ‘Eastside hipster’ not for me, but it was fun to experience the showiness, club music etc. The drinks do skew sweet, and there’s no Mezcal list. And for the life of me I’ll never understand why these restaurants burn incense and palo santo like they’re about to announce the new pope.

To cleanse our sins we had lunch at Holbox. Food wise there’s no comparison.

ps. they checked my vaccination but not my girlfriend’s (we entered separately). In NYC they also make you show ID. Not sure why that’s not common practice here.

The law in LA is that restaurants have to check proof of vaccination and match a photo ID.

It’s kind of silly at the moment given how many vaccinated people are being infected by Omicron.

Sorry to hear your experience was so bad. Holbox>ka teen

I will definitely try again in a month or so. Quite like Wes’s iterations of Guerrilla Tacos. And not to blame our server, but we were pushed towards the seafood stuff.

An aside, but I totally agree about these large format meats at places like Damian and Ka’teen. Makes it hard to taquear effectively without a range of salsas and condiments.

Calling this a Wes Avila “project” is a stretch in the extreme. It’s a Hollywood club restaurant that paid him to design a menu and give his name. The food is exceedingly bland and overpriced, and every waiter is a 19 year old cartoon of an aspiring actor. Avoid.

It’s a Hollywood club restaurant that paid him to design a menu and give his name. The food is exceedingly bland and overpriced

my observation as well

So kind of like…a project

Fair enough. All I mean is, I think it’s something he touched for a minute and will never cook at or see again, and I wouldn’t go to this thinking you’re getting Wes Avila level cooking.

Also, for a purported Yucatan restaurant, there seems to be only one dish from that region: the cochinita pibil. Which was downright awful.

Yes, it was bad when I had it too.

So this is a direct quote from Wes:

It started off as a Tulum-inspired restaurant,” he said. “It has the Yucatan feel, the vibe, the ambiance. The cuisine itself is more Mexican coastal; you go from the Gulf of Mexico to the Caribbean Sea all the way to the Pacific. We’re showcasing those styles of cooking and those ingredients and I do it with an LA twist.“

A new restaurant from the chef who created Guerrilla Tacos.

So to me he’s going for a beach vibe and mixing in Mexican cooking that he likes not specifically Yucateco food.

I was looking forward to dining here, given chef’s pedigree, but i’m going to pass unless reports start improving.