[NYT] Should Restaurants Offer Guests That First Taste of Wine? 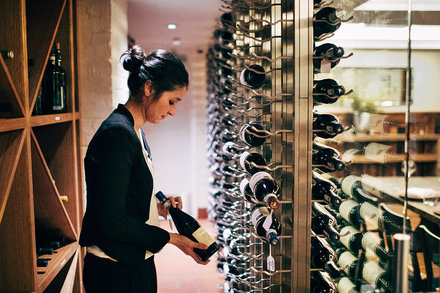 Should Restaurants Offer Guests That First Taste of Wine?

Some diners feel awkward when they are presented with the wine to taste. Should that age-old ritual be eliminated?

@Bookwich – why do you think so?

I think that article makes a world of sense. Whether I like the wine or not doesn’t have anything to do with whether there’s something wrong with it. And my ignorance on such issues means I likely wouldn’t even know if there were a problem.

@catholiver – Everyone has their own individual taste and PPP (personal palate preferences). What you may love, I may not, and vice-versa. But it is NEVER acceptable to reject a bottle in a restaurant/return a bottle to a retailer simply because one doesn’t like it.¹

That said, there are many ways in which a bottle of wine may be (or become) flawed. This is why we often say, “There is no such thing as a great wine, but only a great bottle of wine.” Certainly a wine can be “corked” (contaminated by 2,4,6-trichoroanisole or 2,4,6-tribromoanisole; TCA and TCB, respectively). And every individual has his or her own threshold level of sensitivity. This holds true for every other form of taint, flaw, contamination that can affect a wine . . . not only do these flaws exist, but individuals have different levels of sensitivity to those respective flaws.

I, for example, have a lower sensitivity to (meaning I can tolerate higher levels of) VA. On the other hand, I’m highly sensitive to EA, to mercaptans, to H₂S, SO₂, and a number of other compounds.

TCA/TCB is measured in ppt (parts per TRILLION). On top of that, detection is also complicated by the olfactory system’s particularly quick habituation to TCA and TCB, making the smell less obvious on each subsequent sniff. Low levels of TCA can be virtually undetectable as “taint” and only evidence by what is termed as a “muted” level of fruit. (But again, we are not limited to looking only for TCA/TCB.)

After 40+ years in the wine trade, I would like to think I know a little about wine. And, personally, I’d be rather ticked if I wasn’t offered a taste first. OTOH, I know many people who could care less if they tasted the wine prior to it being served.

I think the best solution is simply for the somm/waiter to ASK, “Would you like to taste the wine?” After all, some of us do know what we’re looking for . . .

¹ This is simply fact. Law, even. But this is not to say it never happens. After all, “the customer is always right” still carries a lot of weight, and there are certainly times when someone will take a bottle back because they fear losing a [potentially] valuable customer.

As someone who is fairly well acquainted with wine (I am far from an expert), I can see both sides. If I had @Jason’s expertise, I would likely be a little put off by being left out of the loop. I personally don’t mind as long as it’s been established that the wine isn’t flawed. I don’t have the level of sophistication that a sommelier has, so I"m willing to trust their judgement. My guess is that the majority of diners are in that camp, but YMMV.

@OCSteve Let me make one thing clear: a) finding a flawed wine due to cork taint is increasingly rare; b) finding a flawed wine due to improper storage is more rare today than in, say, the 1970s or 1980s. That said, while I do trust the judgement of the sommelier, it’s also a matter of two palates are better than one. I can think of only two times in my life when I’ve “caught” a flawed wine that the sommelier missed (and once when I thought a wine was flawed and the somm convinced me – correctly – that it was not).

I have no doubt that not just the majority – but the overwhelming majority! – of consumers could care less . . . they want something that tastes good and that fits into their price range, period; end of concern. But then this opens up an entirely different can of worms: why do people trust sommelier to taste the wine and tell them it’s fine, but not trust him or her to make a recommendation?

I think the best solution is simply for the somm/waiter to ASK, “Would you like to taste the wine?”

And I never trust a waiter’s recommendation or description of a wine. I’ve asked for a minerally white from Spain and been steered to one too many sour, insipid wines to ever roll those dice again. Same goes for “buttery” Chardonnay.

Wine flaws are rarer than they once were, but I encounter flawed bottles all the damn time.

That might be because I drink mostly “natural” wines, some of which are prone to extreme bottle variation.

@Bookwich – 1) I’m not sure what you mean by “this.” 2) I think whether one trusts (or doesn’t) a restaurant’s staff depends upon the restaurant. Now, I realize that I broadly know as much as the somm (+/-), but then again, we’re talking here about restaurants like Michael Mina, Perbacco, Gary Danko, etc. I wouldn’t go so far as to say I would trust the recommendations made by the waiter at Denny’s or Pizza Hut. It’s all a matter of degrees. The more the restaurant puts into their wine program, the more I expect there to be a somm (or a wine waiter or manager or owner) to know what the **** is on their list.

That said, I think it’s perfectly acceptable – if you’re asking for “a minerally white from Spain” and you get served a “buttery” Chardonnay – to ream the somm, refuse to pay for the wine, and demand to see the manager . . .

I trust sommeliers, especially at the caliber of restaurants you mention. It is nice to learn and understand new wines. I’m blessed with a sensitive palate, yet cursed by laziness, thus ignorance.

I agree that the level of restaurant has everything to do with the the level of trust one puts in a sommelier. But most waiters simply don’t have the training, palate or experience of a good sommelier, no matter the caliber of the restaurant. And not every restaurant has good and/or honest sommeliers.

So I’d like to be offered a taste of my wine. Even though I’ve waved it away and simply had the wine poured. It depends on the wine and the restaurant.

I’ve often gone to restaurants with very fancy lists where the sommeliers were not trustworthy, in that I described what I wanted and they brought me something that didn’t match the description at all.

You put it so much more succinctly, but yes. Exactly.

I’m curious how you respond when that happens. Probably a polite form of “WTF”???

CLEARLY we go to different restaurants, Robert. I cannot recall a time when that’s ever happened to me.

Then again, I generally don’t “gamble” in fancy restaurants with $$$ price tags. I am far from knowledgable about every wine on the planet, but I’m loathe to say things like, “What should I drink?” and then order a bottle about which I am completely unfamiliar. Thus, I can honestly say I have never been “brought […] something that didn’t match the description at all.”

Might just be different taste. I go to lots of restaurants where all the reds appear to be to my taste overly alcoholic, overripe, and over-oaked. If I say I find such wines unpalatable and am looking for something different, a trustworthy somm will either bring out an outlier or tell me that unfortunately they don’t have anything like that. An untrustworthy one will bring out something that’s exactly what I said I didn’t want.

For the first time in I can’t remember when, I sent back a bottle of wine last month (at Chez Panisse). I had narrowed my choices down to two, and the waiter recommended a potential third choice. I took her suggestion. The start of my taste was flat and then turned to “I can’t drink this - there’s a menthol numbness on my tongue that will kill the food taste” - she saw my expression of “this is quite odd” and then my dining companion tasted it, and said “I can’t drink this.” Without hesitation, the bottle was gone, replaced with one my original two possibilities. This was an excellent response and recovery to a bottle that wasn’t corked, it was just wrong.

That’s strange. What kind of wine was it?

That’s strange. What kind of wine was it?