Opening in February 2016 at 609 La Cienaga Blvd, West Hollywood, steps away from Urth Cafe and Melrose Place. I had an awesome meal at the Honolulu branch last year, but each branch is unique. The soon-to-open 5th Avenue one in Manhattan sounds like it might be a little different, but if the LA one is anything like what I had in Honolulu, then LA should be in for a treat!

I read your post on the Hawaii CH Board. Based on what you wrote there, I’d be very curious how they do here, since I know you’ve tried Mori and Shunji

Big fan of Mori and Shunji, and I always visit them when I’m in LA. Shunji’s breadth of neta is very impressive, and some of his shellfish is tops. Mori has been described as “par excellence” technically, and I’d totally agree. Rice and formation at Mori are fantastic.

The meal I had at Sushi Ginza Onodera was as good as it gets stateside for me. I’m quite certain both sushi chefs were moved from the Ginza branch to Honolulu (they didn’t just hire a local sushi chef). I’ve only been once, however, and the mark of a good sushiya is consistency, so I’d really need to visit multiple times to really understand it. But, my experience there was quite flawless so I know they’re capable of greatness. Both in terms of technical excellence and dining experience. It also helped that there’s only a few seats at the bar, so I essentially had an itamae and waitress all to myself. It also helps that they only have omakase menus, so they can streamline everything they’ll serve you without having to field a bunch of orders from different diners. Edobitsu for the rice basically for each party, so they can plan the rice temperature/moisture (you’re not going to walk in and get the cooled-down tail-end of a pot of rice). Knifework was impressive, too. E.g. perhaps to achieve the right “drape,” they used different knives and cutting for different ages/fattiness of fish (e.g. comparing two cuts of aji, two cuts of maguro, etc.), and I’m talking more than just takobiki vs. yanagi-bocho.

When I was there, they did mention expansion to NY and LA, but I didn’t press it. I could tell, however, that if the Honolulu branch was in LA, it would immediately be in the top echelon, no question.

There have been reports that the Manhattan branch will be significantly more expensive (compared to the $160, $200, $250 options in Honolulu - note: these include tip, they won’t accept it), so I can only hope that the LA branch will be like what I had in Honolulu (both in price and approach…i.e. I hope they’re not trying to go super luxe against Masa in NYC). FWIW, since they didn’t take tip, consider that pricing is right on par with places like Zo DTLA, Nozawa Bar, etc. Personally, I think SGO blew Zo DTLA, Sushi Tsujita, and Nozawa Bar out of the water.

Stateside, this has potential to be a top-contender. I hope the LA branch really delivers.

Edit, full disclosure: I just met a girl (elsewhere) right before dinner, so that may have had me on cloud-9 all night. Still, I believe I was coherent enough to focus on what was going on at SGO.

uh-oh, your disclosure is very telling.

anyhow, can it compete with Mori ??? or a couple notches below ???

thanks man. sounds like a dope fucking joint. we really excel in sushi in LA never knew that Honolulu did too.

IMO, yes, it can compete with Mori, most definitely. Maybe I went on a great night, but I remember thinking it was possibly the best experience in the US that I’ve had so far. With that said, if you put Mori as an omakase-only, 7-seat counter with beautiful decor and very private setting, that surely ups the experience a bit. Now, I’ve learned a lot since then, but the impression it left on me was serious. Maybe it was the surprise, because I didn’t expect to find a place like that in Hawaii of all places (SGO is an anomaly; Honolulu does not excel in sushi). LA has excellent sushi and SGO will comfortably fit in at the top echelon in LA/California/US, if it’s on par with what I had in Hawaii. It’s the total experience and all the details. Still, SGO Hawaii had very impressive technique to match in spades. Formation, knifework, awesome neta (they really spare no expense. I went to another joint that was literally twice the price w/ a little alcohol but they wouldn’t serve me one of the cuts I got at SGO; I was told “no, we can’t serve that it’s nearly $200/lb.”) Now, the question is if the LA branch will be as good. I certainly hope so.

Edit: It sounds like LA might be getting one of the Honolulu sushi chefs? If so, that’s a great thing.

Mori Sushi: The nondescript, corner sushi bar with the hokey caricature of a pedestrian fish on its awning instead of an official name has quietly being going about its business in a decidedly, down-market section of West LA for the better part of a decade and a half. Suffice to say, it’s illustrious yet salacious neighbor across the street is a loveably trashy bikini bar known simply as “Fantasy Island.” The eponymous Mori had risen to the top ranks of sushidom over the ensur…

How was SGO’s (Honolulu) sake list if you looked at it? On Yelp there’s one picture of Dassai Beyond and maybe a bottle of Dassai 39 from Instagram, can’t find a proper menu or screenshot of it.

I think I had Denshu’s Tokubetsu Junmai. Sorry KK, I don’t remember the price or the rest of the sake menu, and I didn’t take a picture of it. I’m very young when it comes to the world of nihonshu, so I’m not the best person to ask.

No worries Mark, and thanks! I’ve only started getting really interested in sake a few months ago and paying attention to what restaurants are offering (and their pricing). Almost tried a similar Denshu at Iroriya last week, but ended up with the Shimeharisiru “Jun” Junmai Ginjo.

Is there any news on when this will open, if at all?

SGO’s website has undergone a recent renovation, finally confirming the Los Angeles opening first-hand (https://onodera-group.com/en/). However, while the “Menu” section says Spring 2016 for LA, the Location section says summer. Given that it’s already April and the opening date has been pushed back twice, I probably would expect summer.

Shibumi should be much sooner than Onodera. Stay tuned.

Yeah I got the word today from management also. Thanks!

Most excited about Onodera, praying interior design will be the classic hinoki low counter style like this… 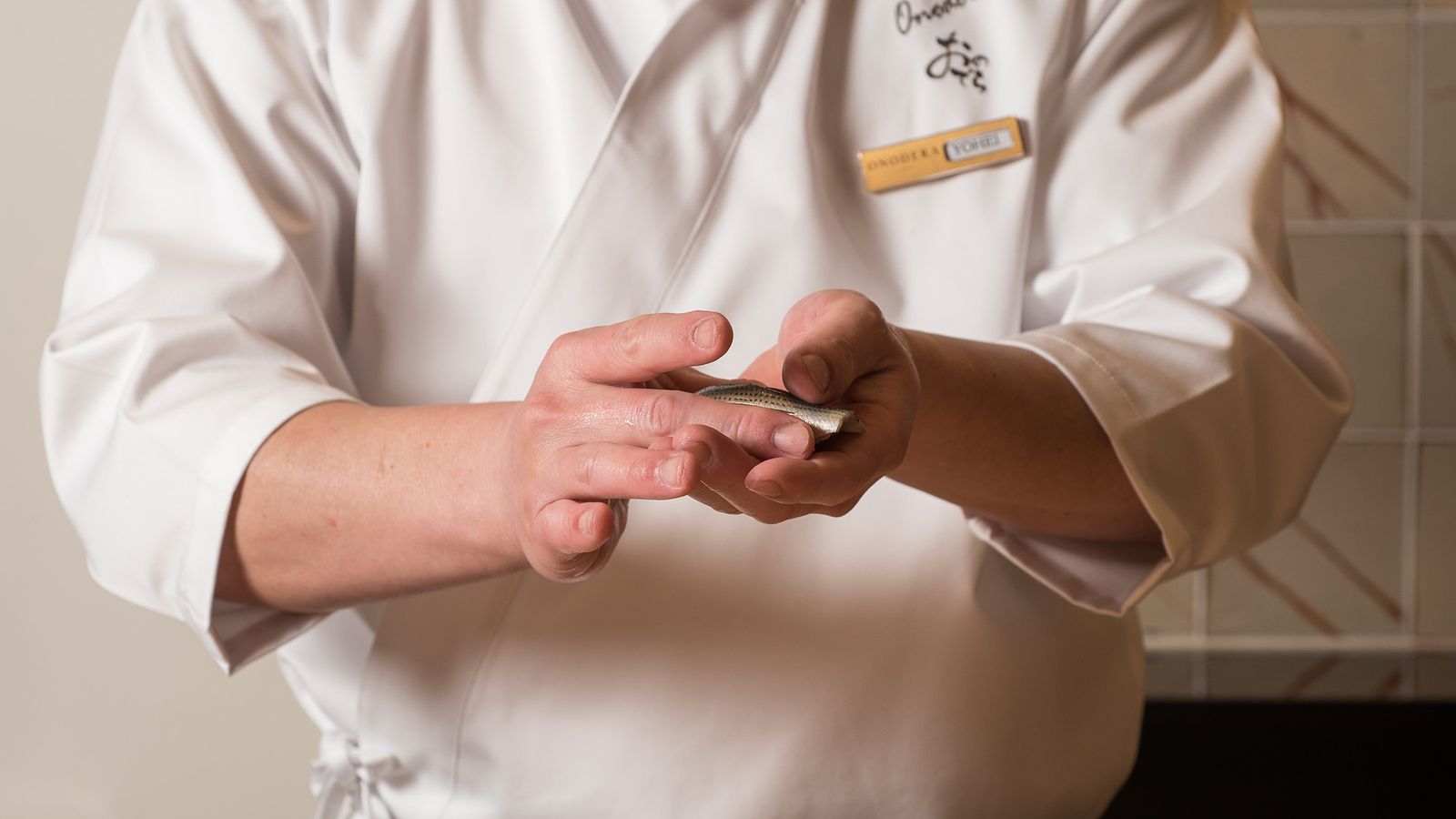 The high-priced Sushi Ginza Onodera is officially open for business

Sushi Sho restaurant, led by renowned chef Keiji Nakazawa, makes its US debut at our Waikiki Beach resort. An impressive sushi counter and sake selection round out the offerings.

A few reviews on Yelp (yes, I know) claim that the NY branch uses brown rice. Is this actually the case, or a mistaken impression due to something like vinegar coloration? My experience with haigi mai at Hamasaku was that it was slightly distracting; I have my doubts whether you could make full-on brown rice work for sushi.

Additionally, regarding the menu: Eater claims that it’s a $300/$400 selection, similar to the one available in New York. Do we have an actual source for this? There is no menu posted yet for Los Angeles on the official website. The price point seems a little high, even given the location.

reading the Yelp reviews, it appears only 1 person knows WTF they’re talking about

In addition, their sushi rice is not white but slightly brown because they mix two red vinegars (one lighter & the other thicker) to make the sushi rice which I enjoyed a lot.

Best pic I can find in 1 minute of the underlying rice color:

ProTip yelp reviewers: if you’re going to go out on a limb and proclaim brown rice at a sushi joint, you better back that up with pictures.