Want to see all our Long Beach Foodie Updates? Click here to scroll through the archives. **** Y’know, the whole “Buy Local, Eat Local, Be Local” mantra is one that some, including myself, take seriously. Many try not to patronize Starbucks and...

Wow indeed. From their web site: “It’s traditional Southern cuisine but much is redefined to be healthier and lighter. ‘There is simply no reason food can’t look and taste amazing with the best ingredients, better cooking methods,’ says Chef.” 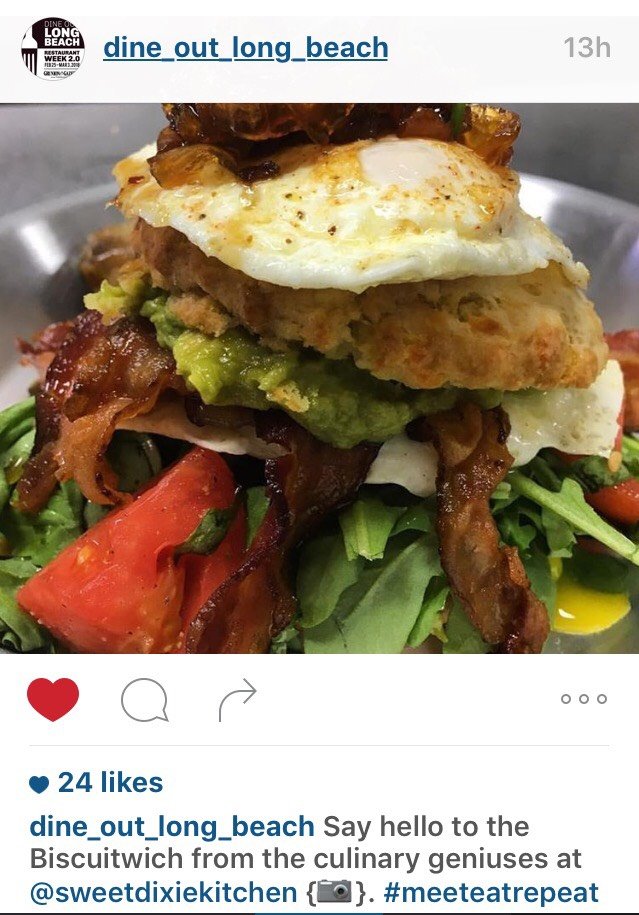 Specialties: House Made- New Southern- Crazy Family- featured on Bravo -down home!! and It takes time. (And maybe a little extra time in our tiny hot kitchen!) The chef, part of the Mama's of San Francisco family, worked, baked and managed…

She also responded on the blogger’s site. She’s definitely, um, not great with the PR, or ethics, or, you know, the business end of things.

If she opened this restaurant with her own money, then I have no problems w/ her foolishness. The customers will ultimate vote with their wallets on whether they want to dine here or not. Now if there are investors involved, then I really have to question her lack of judgement as well as the investors for putting someone like her in charge of a business.

we were introduced to a woman from Alabama who now sells the most wonderful jams and AS IT HAS ALWAYS been our goal to feature local food and guest chefs here, we promote usually small batch local producers in our menu

my only gripe here is her claim to doing everything in house when it’s clearly not. She probably also would’ve been better served transferring the popeyes into a sysco box.

I wonder if she’s going to pass along the savings to her customers?

I remember seeing a Popeye’s promotion for chicken and waffles a while back, too.

Too little, too late.

Still, it’s an interesting business idea, to bring in the food and claim to have made it; makes me wonder how many other places do similar things.

Too little, too late.

Still, it’s an interesting business idea, to bring in the food and claim to have made it; makes me wonder how many other places do similar things.

I think it depends on your definition of “similar things”

Lots of Chinese fast food places buy premade frozen egg rolls and do nothing but open box and deep fry (no defrosting required).

Or what about your typical local deli counter that buys prepackaged, presliced bread, and prefabricated and presliced sandwich meats to “make” your sandwich? Same with their sandwich sides, like potato salad or cole slaw – basically out of a big tub from (sometimes) Costco, or more likely US Foods or Sysco. Just scoop and serve.

And how many restaurants are actually making their own ice cream? (Thank god for Sysco, right?)

There’s a wee bit of difference between frying frozen egg rolls or buying charcuterie. To buy already cooked food, and do absolutely no cooking whatsoever, simply slap it in a biscuit is odd. I mean, what if Ludo sent his dishwasher to pick up fries from McDonald’s a couple times a day for steak frites? That would be weird.

Not to mention the touting of “from scratch”, “home-made”, etc.

It’d be like Chi Spacca advertising it’s in house charcuterie program and then finding out its just boars head.

To buy already cooked food, and do absolutely no cooking whatsoever, simply slap it in a biscuit is odd.

she did have to reheat it…

Did they reheat the chicken? I’ve seen places use cold fried chicken in sandwiches.

Did they reheat the chicken?

we put it in the refrigerator, let it cool, and then we re-heat it in the oven

Did they reheat the chicken?

we put it in the refrigerator, let it cool, and then we re-heat it in the oven

Right. So how is that really different from a typical deli counter buying pre-sliced bread, and then filling it with pre-sliced cold cuts that they bought, refrigerated, then unwrapped?