The sandwich place next to Tacomiendo on Inglewood and Culver is finally open. @President_Mochi this is the ex Guadalajara bakery you asked about in the Mexican food in Inglewood thread.

Dropped in there this weekend and grabbed a couple of sandwiches to go. This is strictly a to go place. They have one small chest high table with a single stool.

We got the Lonche Tapatia and the Ropa Vieja. Sandwiches came with a small side of cabbage slaw, pickled jalapenos and a red salsa with a kick. We liked the bread, good crustiness, but not tough. Held up to the sauce without disintegrating. The sauce on the Lonche was a seasoned tomato sauce with chipotle, not very acidic but I also didn’t detect a lot of smoky chipotle. The meat was tender, good pork flavor. I generally like mayo but not sure if this worked for me.

The ropa vieja had a good beefy flavor, I didn’t detect a lot of the veggies. It also tasted like the same tomato sauce.

All sandwiches $6.99. Portions were good, flavors solid. I’d go back and try a few more. Maybe give them a chance to get their footing. They all looked very nervous and anxious to please. It looked liked a steady stream of native spanish speakers coming in ready to try the new kid on the block. Pics below of our sandwiches and the menu.

Awesome. Thanks for the report.

Looking forward to trying it.

Eater mentioned Food Talk Central and included a link to your report in today’s morning briefing, @Jase. How cool.

Tried it today. I liked it. I got a tuna lonche, and a panela lonche that I requested they make ahogado. They were happy to comply.

The tuna was deli counter style, and kinda dull. The lonche ahogado was fantastic.

The salsa ahogado IS very mild. Like a thin roasted tomato soup… but I got mine to go, and they gave it to me with the salsa on the side… so I stirred in both little cups of red salsa which is pretty FIERCE, and I was very, very happy with the finished product.

I also requested that they add lots of jalepenos (because they greeted me as I came through the door by saying “Nothing here is spicy,” which I rankled at a bit).

The bread was spongier than a like, but it softened dramatically when drenched in salsa. Definitely a place I’d go back to if I was in the neighborhood.

Finally stopped in and tried the Torta Ahogada. This was my first foray into such a sandwich but won’t be my last. I was into it. I was surprised by how well the bread stood up to the sauce. And I agree with @Moomin that the sauce is much aided by the salsa/hot sauce they also provide. Hope they stick around!

Closer to LA tortas ahogadas el guero, in east los great sauce and bread with pork and pickled onions, the lady asked how spicy I wanted the sauce so that was a plus!

I was surprised by how well the bread stood up to the sauce.

Having the right bread for this type of sandwich is key. Firm enough to hold up to the sauce to not fall apart but not so firm that it’s hard to eat. Glad you liked it! 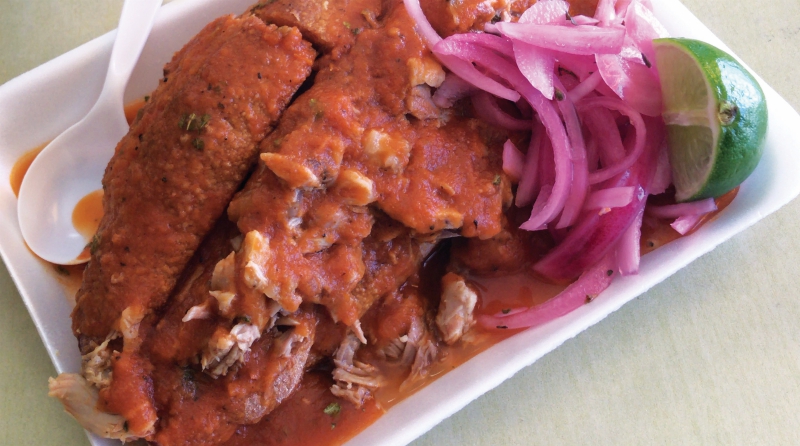 A tasty torta "drowned" in goodness

I’ll definitely give this place a try!!

They’re worthy of a visit if you’re not too far away. The cemitas truck that was parked down one block on Inglewood was worth a stop too. They used to be reliably there almost every PM, but I’ve been seeing the truck parked on the 3700block of Centinela lately - in front of the Mitsuwa parking lot.

They’re worthy of a visit if you’re not too far away.

in front of the Mitsuwa parking lot

I think I totally missed the original post when it was first written! Not too far away at all, and I don’t think I’ve had this style of sandwich.

The truck (I assume they’re unrelated?) was swamped when I drove by over the weekend. Will have to try that, as well… And to pace myself w/ all the calories.

I just drove by Mitsuwa on Centinela. The Cemitas truck was gone already. The sidewalk taco stand has staked out this area now for at least six months. I’m guessing the truck might be honoring this and not competing with the stand.

Ah, thanks for clarifying. I got the 2 mixed up.

Not to derail the thread, but have you tried the taco stand?

Yes. It’s OK. It was kinda novel at first (for the general area) but it now seems far more common to see these pop-up stands opening up in more areas.

There are so many around the mar vista area now. There’s one on the southwest corner of venice and centinela, in front of the auto store. There was a new one that set up by the rite aide parking lot entrance near Washington and Centinela before the dust of the street construction drove them out.

The cart in front of Northgate used to be on Culver and Slauson in front of the laundry mart and when they moved, a new one popped up in their place.

Tapatia also started having a taco stand at night outside their doors. So yeah, lots of these little ones and that’s not even counting the trucks.

I’ve been seeing the truck parked on the 3700block of Centinela lately - in front of the Mitsuwa parking lot.

They’re usually there during the daytime. Their chorizo and egg breakfast burrito is decent.

There was a new one that set up by the rite aide parking lot entrance near Washington and Centinela before the dust of the street construction drove them out.

These guys are back now that Centinela is paved. I pulled over on a whim tonight. Basic taco stand. $1.25 a taco. They’re pretty generous with the fillings. They have al pastor on the spit but they shave and finish on the flat top. Marinade was nothing special, Tamix on Venice and Sepulveda is definitely the go to for Al Pastor on Westside.

I also got the lechon and chorizo. Nothing bad, nothing outstanding. It’s a quick hit kind of place if you’re hungry and walking by or shopping in that center. Grab a couple of tacos and move on. Nice guys running the stand.