The beverly blvd sushi joint. (somewhat long) (and that ain't no joke)

@Porthos - I now see that. Your reply on the NYC post was eye opening. I protested what you said, because we’re known for the freshness of our seafood. But you’re right. We don’t have straight forward sushi. I occasionally like “creative topping stuff” - it’s tasty, not because it’s the real deal. I prefer sushi unadorned. That’s why I like Sugarfish. But apparently I’m not supposed to like them either…hmmm.

I welcome any suggestions people have. This blog is a tough crowd when it comes to sushi. It’s a little intimidating. I’ve been waiting for a casual thread like this to ask. Because frankly, sushi experts are more insufferable than wine experts.

I do have Japanese people in my family that I’m really close with. They like sushi enough, but are more the shabu-shabu, grilled meat types. Who knew tongue was so tasty!

come any suggestions people have. This blog is a tough crowd when it comes to sushi. It’s a little intimidating

Don’t be intimidated! It’s just a bunch of food nerds. Doesn’t get less intimidating than that

For high end traditional sushi I would say Mori will really open your eyes. Lunch seems to be the better deal at around $120 for 20 ish pieces per a recent report. Dinner usually runs $170 ish for 20 ish pieces and some exquisitely pretty appetizers. I think it’s the best sushi in town even compared to Urasawa before you take price into consideration. Taking price into consideration it’s a no brainer Mori.

People will recommend Kiriko but the price point is so high now you’re better off just going to Mori which is a few steps up in quality and refinement.

Never been but I hear Tsujita Sushi is very good.

I love Shunji but I like him for his cooking skills creative and traditional.

On the more afford side Sushi Gen in Little Tokyo and Kasen in OC.

@Porthos - This is great. I keep reading posts about Mori. We’ll start there. Definitely Shunji too.

My cousin lives in DTLA and goes to Sushi Gen a lot. It must be good - it’s still on Best of L.A. lists and not just sushi lists. That’s a big deal, as L.A. lists are almost always the newest hottest.

Don’t be intimidated! It’s just a bunch of food nerds. Doesn’t get less intimidating than that

But seriously, you don’t find “J_L” a little frightening? Maybe not, because you probably know what the heck he/she is talking about.

Oh for Pete’s sake… Please know that I may be lots of things, but frightening is surely NOT one of them. EVERYONE is welcome to come aboard the sushi boat!

Sure, I tend to get a little detail-oriented about things at times, but at the end of the day, it’s cuz I’m too Type A.

And for the record, I eat sugarFISH pretty regularly.

You set our old board record going to, what was it? Kiriko, Tsujita Sushi, Mori, Shunji and something else all in one week!

We were bummed when you didn’t finish it off by going to Urasawa, LOL.

Okay, okay… maybe it wasn’t you. Maybe your sushi logo stayed in my head as the person. But I read someone posting on this blog being downright vicious when critiquing sushi chefs.

Ditto… I don’t mean to be crass. But that takes a lot of cheddar.

This is an awesome thread.

You set our old board record going to, what was it? Kiriko, Tsujita Sushi, Mori, Shunji and something else all in one week!

We were bummed when you didn’t finish it off by going to Urasawa, LOL.

Fear of imminent mercury poisoning (coupled with the fact that I had to leave the U.S. for Europe in order to go eat at San Sebastian) was the only thing that kept me from sushi-gobbler immortality.

You did us proud!

Thanks for letting us live vicariously through your visits.

I may be lots of things, but frightening is surely NOT one of them

I beg to differ.
Your appetite is truly frightening.

Had a fantastic meal here today to round out an interesting year.

Sashimi of yellowtail, kampachi, shima aji - all great in their own way.

O-toro sashimi - outstanding. Easily the best toro I’ve had this year, possibly ever(?). Shige commented that it was the season for it.

In front of my eyes, Shige seared some skipjack (I assume - I always get this and bonito mixed up, but given the milder flavor…), and then sliced and topped with shoyu, olive oil, scallions, and ginger.

Scallop sashimi, dressed even more simply with lemon and olive oil. You wouldn’t think the olive oil would be appropriate, but it was…

Chu-toro sushi - normally I favor chu-toro over o-toro, but today I have to say it was a tie. Both were fantastic, best-in-class.

Dessert - skinned pear poached in an 82 Chard, topped with whipped cream (homemade, from the flavor) and a fudge drizzle (not sure about this one!). Definitely one of the best, most unique desserts I’ve had so far. Shige: “You won’t find this at Patina or Spago!” No, indeed I wouldn’t. I don’t even like pear, but I had to stop myself from ruminating on the possibility of seconds.

The price for this indulgence - $200 after tip and tax. Yes, it was worth it.

Awesome write-up. Glad Shige-san is back strong after his brief absence. I am salivating at your description of that drunken pear.

I never seen so many 1 star and 5 star Yelp reviews.

I’ll be honest this place is intimidating

I’ll be honest this place is intimidating

Shige-san can come across as gruff at first, but he’s actually quite cool as the meal progresses.

I’ve read this whole thread. What place are we talking about? 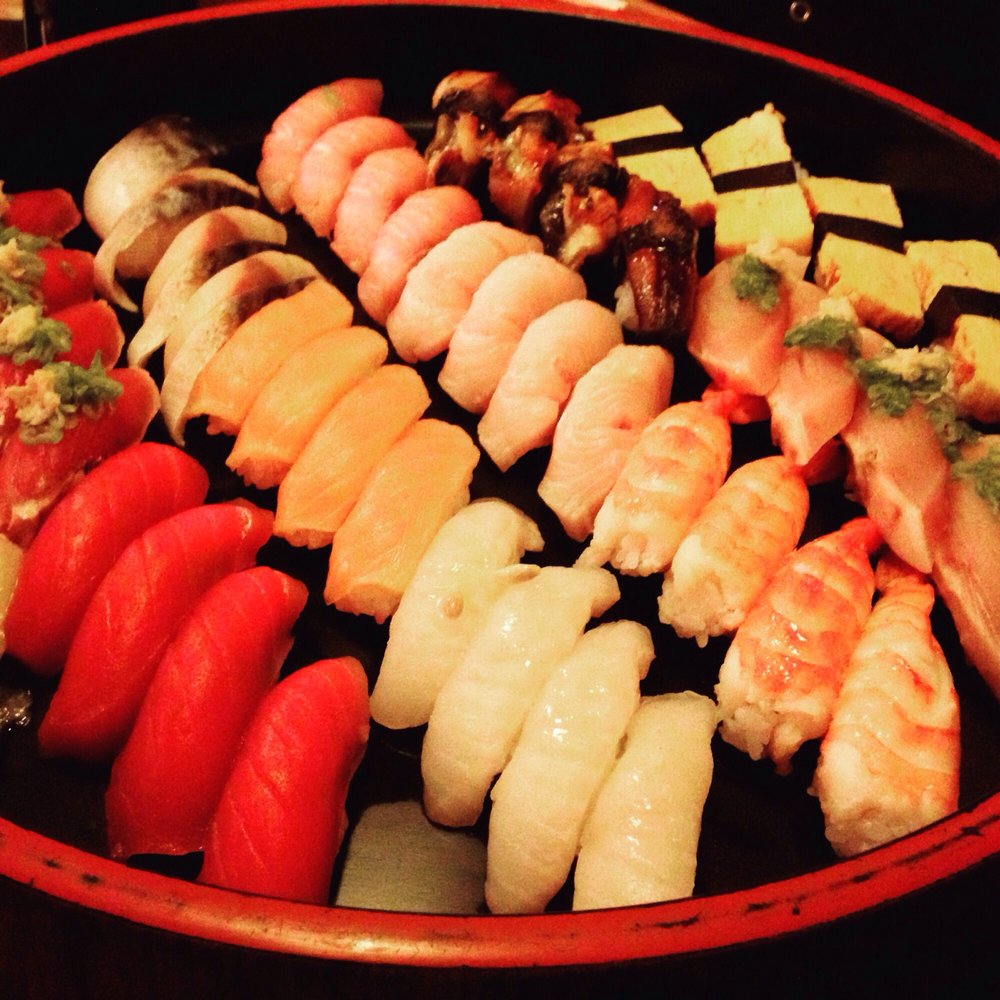 I think you may be right!

[quote=“JeetKuneBao, post:34, topic:1154”]
I’ll be honest this place is intimidating
[/quote]I thought it was just me.

Shibucho indeed. Here’s a link from my last visit (with @CiaoBob & @kevin)…