The Morris Is More Than Its 100 Dollar Duck 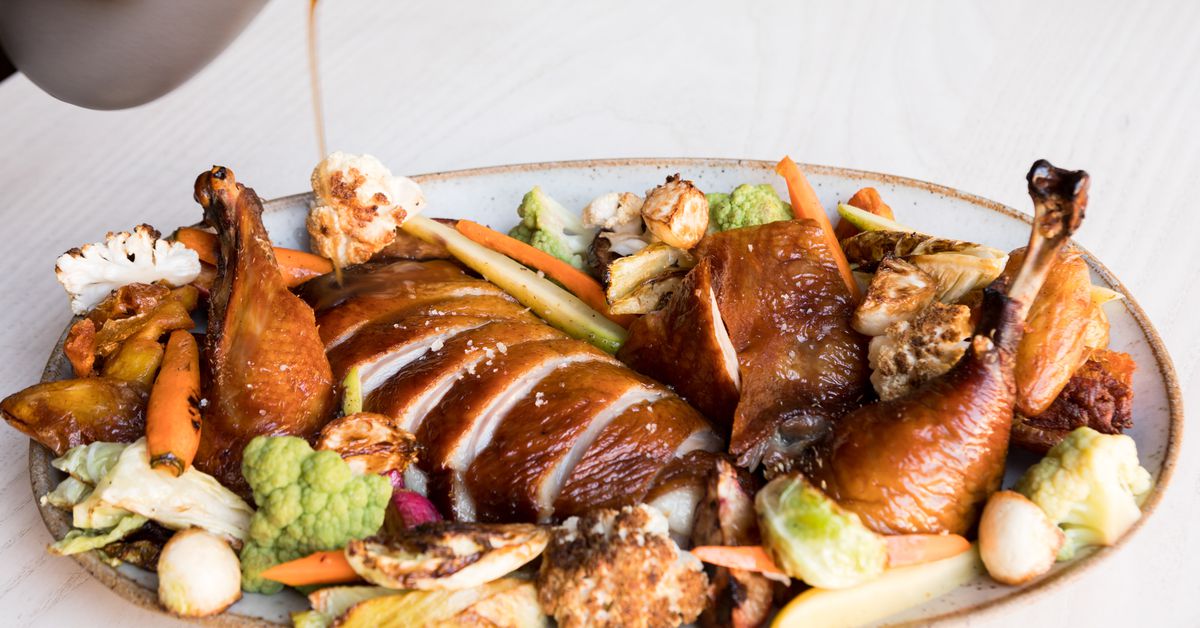 The Morris Outshines Its Signature Dish

Two stars for a neighborhood spot packed with personal touches

“… duck mousse and duck rillettes and duck offal confit, all of which were divine. … pork trotters: fried, smoky, stupendous”: how have I not been to this place?

Anybody been there and have tips? I’m doing the Full Monty for sure.

The burger at lunch is my go-to SF burger.
Far superior to the Slow Club burger of old.

…the Charcuterie plate is another lunch fave.

Their menu looks great - esp. the charcuterie. Thanks, r.

Started with The Full Monty ($50), since that’s what drew me there. Clockwise from left, duck liver mousse, pâté de campagne, rabbit terrine, smoky pepperoni, Jägerwurst, duck rilletes, fried trotters, and headcheese in the middle. It came with a pile of thin Tartine toasts.

This was one of the best charcuterie platters I’ve had. Each item was excellent and different from the others. My favorite was the duck rillettes, I could eat a lot of that. The headcheese wasn’t the usual unctuous style, instead it was a bit crunchy, like the cold starters you get at Shanghai places.

With that we had Tartine bread with butter and duck innards confit ($6). That great crusty bread sopping with duck fat was so good.

The wine list is insane, not surprising given that the owner, Paul Einbund, is the former sommelier of Frances and Coi. I spent some time going through the list ahead of time trying to figure out what to get. They had the 2013 Seam (his own winery) Barbera, which sounded interesting from the description on their web site, but we tried a splash and it didn’t do much for either of us. I think it might be too young. Instead we got what the bill says was a 2013 Antidoto Ribera del Duero ($48) but I believe it was actually the 2014. Good match for the fatty meats and a reasonable markup (Arlequin has it for $24).

That was a lot of food, so we continued with lighter things. The dumpling with chicken and foie gras ($3.50 each) was served in dashi with bonito flakes on top, sort of like a Japanese twist on xiao long bao. Very nice bite. I’d probably have ordered another if I hadn’t been so full already.

At this point we moved on to a 2015 Chidaine Rosé Touraine ($40), a blend of Grolleau, Pinot Noir, and Gamay the server chose as something that would go well with a wide variety of dishes, which it did.

I didn’t get a photo of the beets with pistachio and mint ($6), which was great, or the Little Gems with bacon and hazelnuts ($10), which was good though I might have liked it better with a little less dressing.

The charred broccoli with squid and chile ($15) was fantastic. My first thought was that it was a Chinese dish, but a healthy splash of fish sauce made it more Singaporean. The spice level was nice and high, comparable to what I’d expect at a Sichuan place with mostly Chinese customers. Einbund said they get complaints from Malaysian customers that there’s too much fish sauce.

Chartreuse slushy ($10): I was worried this would be too sweet for my taste, but it was quite dry. We ordered one to share and they brought it in two glasses, so this might be a half portion. Very refreshing and a nice way to end the meal.

Chartreuse is one of their specialties. They might have the longest list in the world, 25 different choices from $12 to $395 an ounce. They also make cocktails with Chartreuse élixir végétal and bring the bill in the wooden case it comes in.

That charcuterie looks even better than it ‘reads.’!!! They really cover all the bases, don’t they? Thanks for elaborating.