Mexican food in San Diego, always a challenge unless you want tacos or burritos. In the last 5 days I’ve had the opportunity to eat at 2 of SDs newer modern-Mex places. Neither was a very satisfying meal.

No expense was spared on interior design or ambiance at either Red O in La Jolla or El Jardin in Liberty Station. Both are lovely, comfortable spaces conducive to dining. The massive chandelier in the main dining room at Red O is impressive, but the room feels more Moroccan than Mexican. And anyone who has spent time in Guadalajara will recognize the furnishings and feel right at home at El Jardin.

The cocktail menus at both places are well thought out with the usual Mexican cocktail suspects and some interesting crafted cocktails. The watermelon margarita at Red O went down way too easy and was quite refreshing. El Jardin is making their own tepache (a lightly fermented beverage made from pineapple peels) and using it in an equally refreshing cooler that, thankfully, was not too sweet. El Jardin also has a wide selection of mezcals and tequilas that they serve in minuscule portions at high prices. Not to be outdone, Red O offers a $50 margarita…and in La Jolla I’m sure they have a market for them.

So you may have noticed I’ve talked about the decor and the beverage list with nary a mention of the food. Well, that’s because the food at both places left a great deal to be desired. Out of 9 dishes between 2 restaurants, only 1 dish - ONE DISH - fired on all pistons. That was a lovely plate of crispy, very crispy, shrimp at El Jardin. They were seasoned well and crisp enough that you could eat them shell and all. Best dish at either restaurant.

The tuna tostada starter at Red O was okay, but the tuna was swimming in a rather thin, flavorless mayo based dressing. Not good, not bad. The sopes with pork belly were cute little thimbles of fried masa, but if the filling was pork belly it defied identification as it was overpowered by whatever the chile sauce was on it. Once again not good, not bad.

El Jardin really needs to rethink the corunda, the pyramid shaped tamal of Michoacan. What we we got was a flat, pancake of a tamal that was dense with conflicting flavor profiles. The bone marrow with crispy octopus came out with a bone lacking much marrow and we had to really search to find the octopus bits, and bits they were, being almost the size of a pinky finger fingernail. Great presentation, not so great execution.

At Red O we each ordered enchiladas as the entree. Each plate showed up buried in melted cheese, which really did overwhelm everything underneath it. Heavy, heavy, heavy, if we had finished more than 1/3 of our plates it could have nailed us to the banquette for a week.

Entrees at El Jardin were better, but not well executed. Chilorio is a specialty of Sonora and Sinaloa and rarely seen in SD. It’s easy to make and generally a crowd pleaser. It’s made very similarly to carnitas but instead of letting the pork pieces fry and get crispy, an ancho based chile sauce is stirred in to finish. What we got was a nice little Staub casserole dish of pulled pork that appeared to be devoid of anything remotely resembling an ancho chile sauce. The beans on the side were crunchy and the rice gluey. The beef belly chicharron and tongue dish was not good, but it wasn’t bad, or as the person who ate it said “it could have been a plate of pot roast” it was that indistinct.

Nothing on the dessert menu at either restaurant enticed my sweet tooth enough to order.

So there you have it. Red O and El Jardin were both major disappointments. To be fair, I was at El Jardin on opening night. The kitchen, clearly, was having some execution issues. The beans should never have been plated as they were seriously undercooked, but at least they’re trying to do beans from scratch instead of opening a can. I do expect El Jardin to improve as they settle into their regular business routines and the kitchen staff gets into their flow. There is no excuse for Red O, mediocrity at La Jolla real estate prices. I’d go back for drinks because their bar and outside terrace are beautiful, but there are so many better restaurants in La Jolla that I’d plan to eat somewhere else.

I’m not surprised at Red O

similar thoughts. Gonna wait a few weeks before we go to El Jardin. Red O is not on my radar

Perhaps ipse, but given the high profile chef and amount of $$$ invested, I would have thought they’d have most of the kitchen bugs worked out prior to opening. Service was better than the food and I expected that to be the other way around. El Jardin has potential, Red O? not so much

MrK…I was not intending to go on opening night. A friend had a reservation and called and said, hey, you wanna go, so I went. Kind of wishing I’d waited cuz I think the kitchen will be turning out better food in a few weeks. But also kind of glad I had the opportunity to go and experience the space and the menu.

Thanks for the helpful reviews DD.

Red O is a nice place for drinks.

After seeing El Jardin’s menu Online I had high hopes. Hopefully it improves. Opening night is a tough one for most restaurants so will wait a bit before giving them a try.

I’ve had a hard time finding a menu for El Jardin. Where did you go on line? 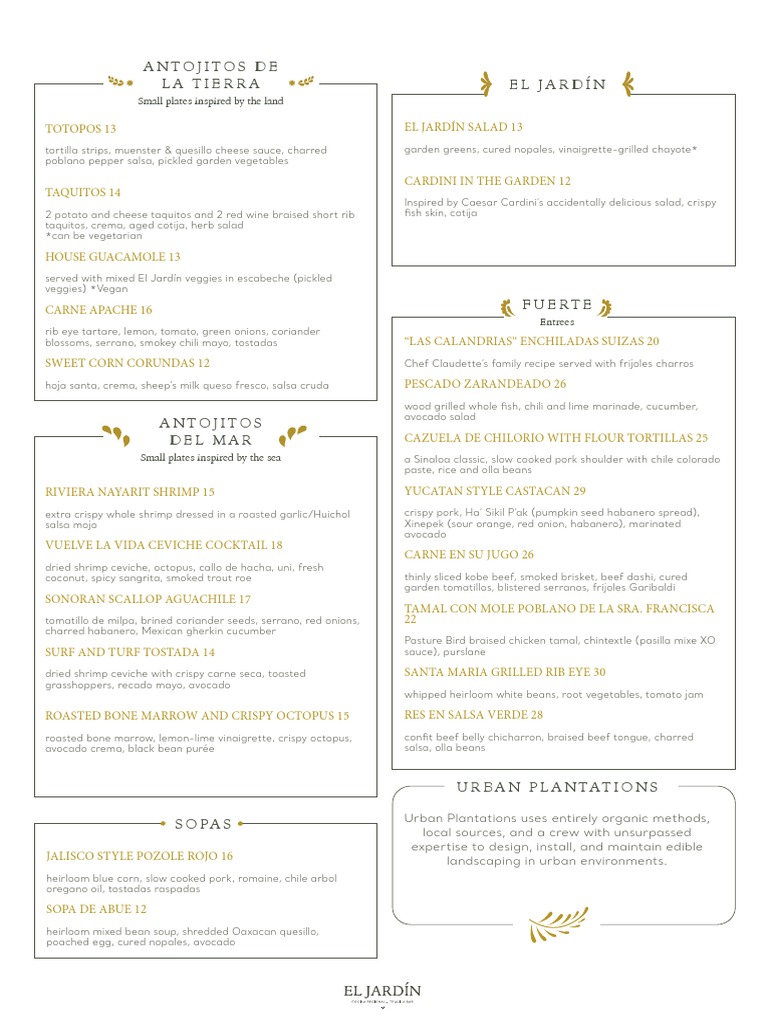 Thanks so much! I much prefer to preview a menu before trying new places, especially if they are high-end.

Three of us had a week-old reservation at El Jardin for last night, and in spite of the misgivings in your post here and elsewhere, we went anyway.

We sat inside and enjoyed the ambience, and we got very good, very friendly service. I started with a full shot (they also have half shots) of Ilegal Espadin Joven mezcal. Our friend had a Margarita with that in it plus tequila. Very nice. My companion had the tepache highball and loved it.

For apps, we shared the house guacamole. Not your ordinary guacamole: It was the hands-down all time favorite for all three of us. It comes with tostata-like (not flat) tortillas rather than chips. Outstanding.

I ordered the bone marrow and crispy octopus, alas a major disappointment. There was maybe a total of one teaspoon of marrow to be mined from the two bones, and the two octopus legs weren’t crispy in the least. A real bummer – to be avoided IMO.

My DH companion had the Cazuela de Chilorio and was disappointed. It was extremely plain and almost flavorless and needed lots of hot sauce (green or chile de arbol).

I on the other hand loved the Carne en su Jugo and would strongly recommend this to others. Wonderfully tender, succulent, and fatty meat slices, and it came with a satisfying amount of whole bean and corn mix, in sauce. The chili de arbol table hot sauce went well with the beans, but I ate most of it plain.

Our friend ordered the Wood -Grilled Ribeye, which was perfectly cooked and deliciously marinated in what tasted like some kind of citrus mix. It came with very tender, grilled yellow beets and radish slices of some sort. It was an excellent choice. We got a chuckle about the way that the knife for that dish was served, which looked like it had been delivered for a ritual sacrifice. She got a glass of chianti (no Mexican reds here by the glass), which was so-so.

I don’t recall the names of our deserts, which we shared. We got two. One looked for all the world like a peeled small banana, but in reality it was shaped in that form, with white chocolate on top and milk chocolate on the bottom, and filled with a very smooth cream with a touch of banana syrup or liqueur. I ended up eating most of that and enjoyed it. The others shared an ice cream and cake dessert which they both loved. Hard to say what the ice cream or layered cake strip was, but both were exotic and delicious. The egg-shaped ice cream came on top of some kind of crumbled cereal or the like.

All in all, a pleasant and enjoyable dinner, and we’re very likely to return.

You had 3 of the same dishes we did and you didn’t fare any better with them than we did. I was hoping by now they’d have those food kinks worked out.

We were too. But we did enjoy two of the three entrees that we ordered, as well as one of the two small plates; all of the pre-dinner drinks; and both desserts. That’s not a horrible score. We had a pleasant time.

We’ve been to Red-O exactly twice. The first time was shortly after they opened, when we had dinner. The second was a few months ago on our 30th anniversary and we shared small plates during happy hour…

I hardly remember what we had the first time at Red-O. The noise level was excruciating. We were happy to get out. The food was just OK.

The second time it was much less noisy, at least outside. We went during HH at a table outside on the patio. The food we shared was again OK, but not at all spicy

I think Red O is good for drinks and apps but that’s about it. Their outside patio is quite nice.

I think Red O is good for drinks and apps but that’s about it. Their outside patio is quite nice.

Agree with you and ipse. Small plates only and only when you can get a table on the outside patio.

Went to El jardin last week. Enmoladas were gorgeous and delivered an exceptional experience. They are tortillas wrapped around a variety of vegetables, bathed in an exquisite molé saice. The mole was on the savory side, i appreciated it’s nuances and restraint, not a spiced chocolate sauce like so many others.

Had probably the best taquitos in my life, perfectly fried with a succulent braised short rib. Then again, I don’t think I have had taquitos from anything but a taco shop.

Service was friendly and helpful, meal was well paced.
Had a delicious red wine from Adobe Guadalupe, one of my favorite wineries in the Valle.

My only “criticism” is the House Guac. It is $18. we didn’t get it, but I can’t for the life of me understand how a serving of guacamole could ever be that expensive unless it was served by Caear Cardini himself, reanimated and tableside.

I am really glad you had a good experience at El Jardin MrK. I’m going again tomorrow night, your post makes me optimistic that I’ll have a better meal this time around.

$18 for guacamole is pretty steep. Avocados are pretty pricey right now. I wonder if that could be affecting their menu pricing?

The guacamole here is worth the $18. Really.