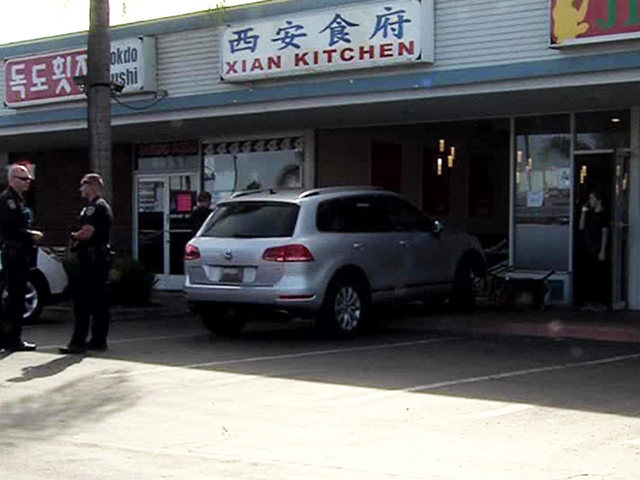 A chef at the restaurant was hospitalized after the crash in the 4600 block of Convoy Street.

Very sad. This happened between their lunch and dinner hours, which is why he was relaxing outside, I guess. I almost went there for dinner tonight, but was very hungry around 4 pm and went elsewhere.

Through an indirect friend, it appears the chef’s injuries are quite serious.

Think good thoughts for him and his family.

Hopefully it’ll be a short time before he returns to the kitchen. And when he does, I’ll be one of the first in line to try his cooking. Haven’t been yet, and am looking forward to it.

Many prayers to the Chef and his family…

Is there any update on the Chef’s condition?

I want to be positive and think that he’ll be back in the kitchen in a couple months or so.

Ipsedixit or anyone else…Is Xian Kitchen part of a small chain from LA? Was in Hacienda Heights/City of Industry recently and there was also a Xian Kitchen with a similar sign and food.

Ipsedixit or anyone else…Is Xian Kitchen part of a small chain from LA? Was in Hacienda Heights/City of Industry recently and there was also a Xian Kitchen with a similar sign and food.

We still haven’t heard anything further about the chef’s condition. Hopefully good news. Also, as far as the restaurant is concerned, we haven’t heard when they think they might be able to re-open. Any intel?

I was just there for lunch yesterday

That’s good news. Now I can finally get over there to try it.

Good news. How was it?

I don’t know anything about Xian cuisine so I’ve no idea about authenticity etc., but my tasting notes:

Mutton biang biang noodles: really interesting broth (has almost a seafoody taste to it – not sure what it is), has clear noodles mixed in. Overall tasty but I much prefer the spicy beef.

Shrimp dumplings: comes out as a giant bowl of soup, but I wouldn’t recommend drinking much of the soup – to my palate it’s more of a dipping sauce, albeit a comically oversized one. Dumplings were good though.

Many thanks for the suggestions, Sage. I tried the biang biang noodles today. I think maybe they’re supposed to be eaten with something else, so that you can dip things into the excess “gravy” (the term that the server used) at the bottom of the bowl. Aside from some sprouts and chili oil (with maybe a little beef paste in it) on the bottom, and some ground dry red chilies on top, this is just noodles. But wow, what noodles! I think they’re the best I’ve had of this kind. And they’re monsters! Fully 1-1/2” wide, maybe 10” long, and thick, too – perhaps a couple of millimeters. Delicious, all right. Will try your other two suggestions at Xi’an, too.

Did you ask after the injured chef by any chance?

No, but in fact I thought about that afterwards, as I was driving home. Not sure how to ask, actually, in case the news is bad…

Good point, could’ve been awkward. Thanks