As many have opined here on FTC, Jonathan Gold’s articles were a helpful culinary guidebook for me (especially his earlier articles back at the Weekly). One such culinary legacy that I’m thankful for was the introduction of a small, homely Korean restaurant named Soban sitting on a quiet stretch of Olympic Boulevard.

We probably would’ve eventually found Soban (thanks to our old board and FTC), but back then, it was Jonathan Gold’s article that introduced me to a place that seemed to serve wonderful Banchan (Korean Side Dishes), Galbi-jjim (Braised Short Ribs) and more.

Thanks to some great FTC sleuthing it seems the original owners sold Soban a couple years ago, but our subsequent visits have still been pretty consistent. Sitting down, you might see a row of containers filled with things that are fermenting:

It acts as a prelude to the stunning surprise you get after you place your order: An embarrassment of riches in the form of 10+ Banchan items (all made in-house), and usually ranging from 11 - 16 dishes on our visits.

On this 5th visit or so, we were given 16(!) Free Banchan with our meal (with free refills as well if you so choose).

But more important than the quantity is the quality of the Banchan. There wasn’t a single dish that tasted bad or mediocre. Just stunning. Some of our favorites included:

(That might’ve been almost all of the dishes.)

But I loved so many of them. The lacquered Sweet Soy Glazed Lotus Root had a perfect toothsome quality and great flavor. The Celery Banchan was incredible as well, the depth of flavor in the marinade was something we hadn’t had before.

It’s got a bit of crispness to each piece, but unfortunately it’s a touch on the greasy side. Still, it’s a tasty mix of Seafood and Egg & Flour Batter, pan seared.

But the star of Soban is their Galbi Jjim, this wonderful pot filled with succulent, Slow-Braised Beef Short Ribs in a Sweet Soy Sauce-based Sauce. It’s tender, meaty, savory and sweet, and you find other surprises like the stewed, tender Carrots, Radish, Jujubes, and Ginkgo Nuts. Spoon some of the Beef Short Rib Sauce over some Multi-Grain Rice and enjoy.

Some of our favorites on this visit were:

I have no idea what Vegetable this was, but it was incredible!

Each one of those dishes were thoughtfully executed, with distinct flavor combinations; wonderful!

We were excited to try Soban’s version of a Dolsot Bibimbap-type dish, a Rice, Vegetables and Protein mix over a sizzling stone pot. The flavors were good, and there was clearly a sizzling happening for quite a while, but sadly, no socarrat!

The lack of crispy, browned / seared Rice was a disappointment, and the Octopus was a bit too chewy as well.

But things quickly got righted with the arrival of Soban’s Eundaegu Jorim, a massive platter of slow-braised Black Cod that is at once spicy, savory and with tender, moist, luscious morsels of Braised Black Cod.

(Warning that there are bones in this dish, for those that don’t like to deal with fish bones.)

They were all pretty wonderful again, with the Marinated Celery Banchan and 2 new different types of Greens being our favorites this time.

(@JeetKuneBao never fear, they still have the Celery Banchan.)

When we read the words “Fish Roe Soup” this sounded great: Thoughts began to spin through my mind, “Would it be like a spicy Mentaiko (Spicy Pollock / Cod Roe) Soup with bits of Cod Roe throughout? Would it be in thicker slices?”

Then it arrived and looking closer, it was actually a Spicy Cod Milt and Roe Soup (@PorkyBelly and other fans of Shirako).

The Cod Milt & Roe Soup itself had a nice, slow, low burn spicy level, perfect for warming you up on these chilly Winter days & nights. The Stewed Cod Milt was softish, but having been cooked through, it was firmer and didn’t really have any creaminess like you get with Shirako in a Japanese Sushi joint.

The Roe was dumped in as the entire Egg Sac(!), so besides looking a bit disturbing with the outer Egg Sac skin, it was a bit harder to eat (you had to break into / cut off a chunk of the Roe Sac), and since it was so large, it made it a bit unwieldy at times. The cooked through Roe was also really firm and meaty, lacking the bright brininess of the variations found in Japanese cuisine. Overall it was fine, but not something we’d order again.

These 4 were some of our favorites today:

This is a dish that might be challenging for some: Essentially Raw Crab in a brine of Soy Sauce, Ginger and Garlic. There is no Alcohol or Citric Acid involved which might help with alleviating some concerns with Raw Shellfish.

However, this turned out be a surprise star on the menu! The Marinated Crab meat is sweet, slippery and bright. A bit more “sticky” than say, eating Amaebi (Sweet Shrimp) at a Sushi restaurant, but the flavors worked very well together, Ginger and Garlic, Green Onions and Onions along with Soy Sauce permeated every bite.

It even had Crab Roe - which was amazing with the hot steamed Multi-Grain Rice!

I was a bit squeamish at first, but digging in (and this will be messy), getting the sweet, briny Marinated Raw Crab meat out of the shell and some of that Tomalley and some of the Crab Roe made it all worth it. One of the best dishes on the menu (and much better than the occasional tiny Crab version of Ganjang Gejang served as Banchan at some places).

We wanted to order their Galbi Jjim again just to make doubly sure of how it compared with various other versions around town we’ve tried recently. As before, tender, meaty hunks of Braised Beef Short Ribs (the waitress will cut it off the bone for you, tableside), with such a good balance of savory and sweet from the long-braising, it is fantastic!

This is probably our favorite Galbi Jjim in L.A. currently, better than Kkini and Sun Nong Dan, and much better than the disaster that was Chef David Chang’s overpriced, mediocre take on Galbi Jjim at Majordomo.

Service was fine, with the friendly staff bringing out food and refilling the delicious (free) Barley Tea when needed.

Soban continues to delight with its bountiful, complimentary Banchan (Side Dishes) offerings that come with every order. Just the Banchan alone and some of their nutty Steamed Multi-Grain Rice would bring us joy, as each Side Dish feels like it was made with care and they all have different, interesting flavors that make for an enjoyable meal. They are quite possibly the best Banchan in L.A., and certainly far better than any of the places we’ve tried outside of Park’s BBQ (which is amazing as well).

I think that might be some type of Korean mountain vegetable, “Korean thistle”. These veggies are part of Korean Buddhist Temple food.

It’s pretty rare to find in Koreatown restaurants. If that is Korean thistle, Soban might be the only place serving it in Koreatown.

The only other place I know is Han Yang in Buena Park they got a Thistle Rice. It’s really good and probably one of the few Temple style dish you can get here in So Cal.

Thanks for the info! And “yes!” that’s what it tasted like.

I think that might be some type of Korean mountain vegetable, “Korean thistle”. These veggies are part of Korean Buddhist Temple food.

It’s pretty rare to find in Koreatown restaurants. If that is Korean thistle, Soban might be the only place serving it in Koreatown.

No expert, but it definitely looks like Korean thistle, which I’ve only seen in Korean sticky rice dish (곤드레밥)

Thanks for the info! Next time we might bring along some Korean speaking friends to clarify with Soban, but either way it was delicious.

The food at Soban is delicious.
If only they had a liquor license or allowed BYOB!

image1155×865 399 KB
Super delicious, tender but still good amount of chew to the beefy beef. Not sure if this is common but ours had a few finger shaped rice cakes.

image1154×866 513 KB
Complex flavors of vegetables, chili, garlic, onions, savory, heat, sweet, tangy, ocean, more things. The octopus was a little chewy, but lack of crispy rice underneath was the most disappointing. A server set it down and instructed us to stir it right away to get the crispy rice. I didn’t see how that would do it. I was right. It didn’t do it. But we liked the flavors enough to order it again, but with multi-grain rice like a neighboring table. Is it rude to ask for extra crispy rice?

Lots of Love for JGold on the Walls

They only serve water, but it’s very fresh, purified water

Looking forward to going back for the Soy Sauce Marinated Live Crab.

So glad you liked Soban!

Yes, go for the banchan and stay for the meal.

They were generous with it too. If we inquired about or praised a dish they brought seconds.

hahahhah be careful with that! When we lived in Japan my mom complemented a friends Kimono and ended up walking out with it no matter how much she protested that it wasn’t her intention!

I think the idea is that you mix the rice as soon as it arrives and start eating from the top. By the time you work your way down the bowl, the rice at the bottom should have crisped up as the stone pot retains heat well.

That’s a big deal. I have a Japanese aunt who is the same way. So generous. My whole life, the minute we walk thru the door her first words are “You kids hungry?” We rarely say no, but if we do she cooks anyway. She taught us graciousness.

Ahhh okay. That’s what she was trying to tell us. Thanks!

Super delicious, tender but still good amount of chew to the beefy beef. Not sure if this is common but ours had a few finger shaped rice cakes.

Never ordered the galbi jjim at Soban but this looks worlds better than the over hyped Sun Nun Dang version. Real pieces of short ribs attached to bones vs. mostly slices of brisket.

Never ordered the galbi jjim at Soban but this looks worlds better than the over hyped Sun Nun Dang version. Real pieces of short ribs attached to bones vs. mostly slices of brisket.

If this makes for good galbi jim, MUSSE in Reseda has a damn fine version. 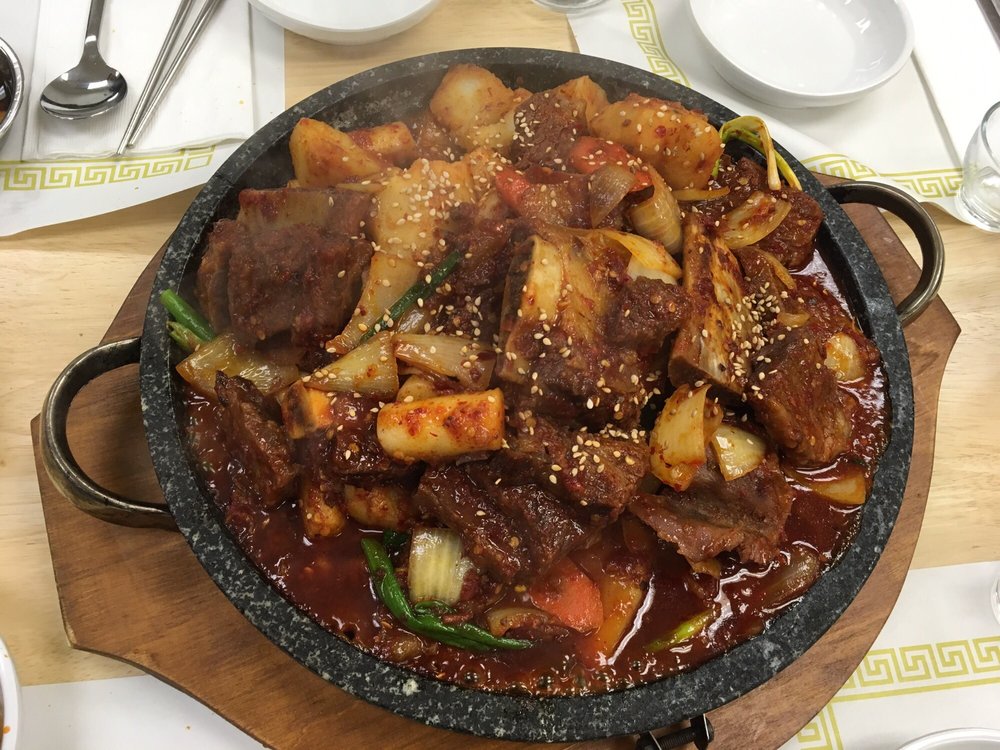 If this makes for good galbi jim, MUSSE in Reseda has a damn fine version.

Looks much better than Sun Nun Dong. That is proper.