There isn’t a Rancho Gordo store, per se, but the products are sold all over LA. The challenge is finding exactly what product you want.
For instance, I’ve seen the RG hominy at Farmshop and other places at times. Then, they won’t carry it at all for long stretches.

I do like their products and so do more of a bulk order a couple of times a year. More reliable than hoping my favorite products are in stock locally.

Rancho Gordo often sells out of one season’s crop before the next year’s is in.

[quote=“aaqjr, post:20, topic:4269, full:true”]
Now that you mention it Farmshop at the Brentwood Country Mart sell quite a bit of Ranch Gordo. Don’t know specifically if they have the Pozole -but it’s worth a call.
[/quote]Sometimes stores will order something for you if they already carry the brand. Before they closed Owens/Roxbury Market used to order Sylvia’s Lemon Pepper for me.

True. I find the product is usually still available directly via mail order.

I think the main store tries to hold back enough to fill orders until the next crop is ready.

it’s actually very different.
Pozole, with a Z, is a finished dish in Mexico made from hominy.
Hominy is dried field corn (not sweet) that has been cooked with cal and then rinsed, removing the skin.
This is called nixtamal.
If you go to an average Mexican store and ask for pozole, they will think you want a bowl of soup.

In the American southwest, posole (with an S) refers to the hominy above which has been dried again. I have never heard of this in Mexico. The corn is cooked with cal, rinsed and then dried. You just have to soak it and then cook it. The finished dish is also called posole.

In the US, a lot of different types of corn are used, even red and blue. In Mexico, they like large while corn.

(Hope this doesn’t come off as pedantic. It’s a constant source of confusion!)

And the canned is used a lot but it can have a chicken cartilage texture that does no one any favors and you need to rinse it, so you lose all the chance for good pot liquor.

To repeat, I have tried Northgate Market with no luck but I am very grateful for some of the information about where to purchase posole; and I call it posole because as I wrote originally, I first ate it in New Mexico (and thank you for that detailed explanation about posole/pozole). Some of the mail order info and some of the “far-away” places to me in Culver City are greatly appreciated, too but I was hoping not to need them. I think now I won’t need them. Thanks to everyone who responded. I don’t know why I waited so long. There is so much great information from this site and the one I used previously.

Just went on the Rancho Gordo website. For location for me in Culver City to 50 miles out, it includes only Farmshop and Belcampo Meat. I just saw elsewhere that Food-LA has that brand. Of course, I know none of them may have it now but I’m going to try a couple other locations submitted. While it may be a great brand, I don’t need it.

I was going to pick up food at El Abajeno last night and decided to try Northgate Market (just down the street from them). The last time I was there, I must have picked the only person working there to ask if they had it and was told no. About 20 steps in, I happened to look to my right and there it was. It’s posole for the weekend but I do have a question. I didn’t ask if this bag was previously frozen. It was refrigerated. Do I take the chance of re-freezing the portion I don’t use?

Worst case the texture after freezing won’t be as good.

That’s what I figured. Even after finishing the cooking and freezing, it’s just not as good. Thanks

I was just at the Culver City Northgate (needed Piloncillo) and they had both dried White and Red dried Pozole in the bins. It’s one of the produce bins in the back. You will find the Pozole on the bottom side of the bin (Look down) facing towards the grocery aisles.

Thank you! Just awhile ago I wrote that I went there and did find posole. It was refrigerated and most likely frozen previously but that’s fine. I will make a huge batch of Southwestern Style posole. If anyone is interested and in the Culver City area, let me know and I will save some for you. Seriously. email is: wheniwasaboy@gmail.com

To the dried white and red! I didn’t even know there was a red.

I just realized I may have made a big mistake. Please - no sales emails and no marriage proposals.

You will find the Pozole on the bottom side of the bin (Look down) facing towards the grocery aisles.

I like that Northgate a lot but it is not the most clearly organized produce section. But sometimes they will have head on chicken and other fun stuff. Superior Grocers really is pretty good in Hawthorne in case you need Mexican groceries after your Chubby Rice run.

I just realized your name is ranchogordo. So I’m sure you know your stuff. You probably already have many recipes. But I saw this today and thought of this thread. Here it is if anyone’s interested. She uses Rancho Gordo dried hominy (mail order). 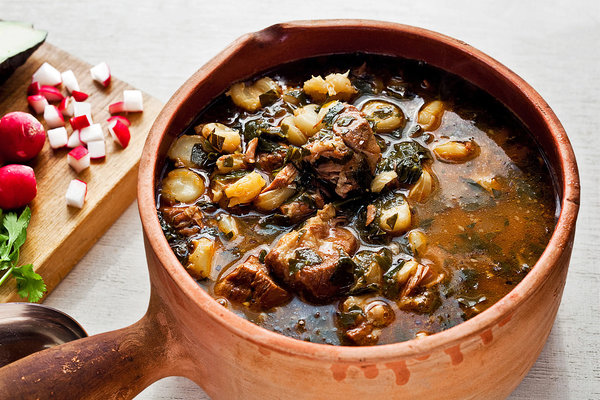 I’ve long adored hominy, the earthy dried corn kernels you find in pozole, the chile-laced Mexican stew When I saw dried heirloom hominy for sale online, I bought some I knew that having it in the cupboard when a hominy craving struck was the best...

It’s prolly the owner of Rancho Gordo, Steve Sando posting himself. He has always been great here but also on Chowhound and Egullet about giving advice on working with Beans and other Mexican ingredients.

Oh really? Sweet! I cook a lot with both. I wonder if he’s the person who scolded me on CH for believing salted water toughens bean skins