Wish there was a place like this in LA proper, looks so good

Definitely agree. If Olive Tree were closer, it’d be in our regular rotation. At this point it’s a good excuse to head south once in a while (and maybe combine it with other places for a nice bang x bang).

If you’re looking for some dessert stop by Chee Sweet. It’s in the same plaza on Brookhurst as the Starbucks and Zait n Zataar. Great little Lebanese pastry shop. Don’t buy any of the pre packaged stuff. We love all of their various types of baklava. They have a lot of other desserts like knafeh and many others I’m not familiar with.

If you’re looking for some dessert stop by Chee Sweet. It’s in the same plaza on Brookhurst as the Starbucks and Zait n Zataar. Great little Lebanese pastry shop.

Thanks for the rec!

Glad to hear it’s nearby, so that sounds like a great bang x bang next time we’re in the area. Fresh made Baklava!

I don’t really recommend the sayadiyah (sp?) simply because the fish they serve is tilapia, but since you mentioned your love of freekeh, they do have a weekly special freekeh w/ the lamb shanks or chicken that’s very good.

The ouzi, breyani and magloobeh and mandi are all just more iterations of seasoned rice w/ lamb or chicken. For my money the kabsa is the best of those options with the idraa in second and the rest tied for third, but it’s fun to try them all. None are bad.

Good to know your recs. Yes, Kabsa Rice was our favorite as well!

And Idraa was our 2nd favorite of the rice dishes.

BTW, have you tried their Shakshouka? Curious how that is.

And any other standouts you’d recommend? Thanks.

Wish there was a place like this in LA proper

Not been yet but there is a place on Airdrome and La Cienega called Oasis that offers a selection of Jordanian dishes on its evening menu. The day menu looks to be more the usual pan-Middle Eastern fare.

I have not tried that.

Now that I live out of town, I pretty much go back to Olive Tree and Z&Z for the most part (or Forn al Hara which is another bakery, similar quality to Z&Z, I like it a little less but it’s in the same strip mall as Olive Tree so it’s convenient.)

Maybe you should check out El Mahroosa? I definitely think OT is better, but they also make a good kabsa/mandi/breyani and they also have the best version of koshari around. If you’ve never heard of it, it’s basically rice lentils, noodles and chickpeas with a tomato sauce and lots of fried onions. Egyptian dish. So, similar to OT, a notch lower on my list for sure, but also undoubtedly an enjoyable place to eat.

I also like the falafel wraps at Sahara, but that’s a way more fast foody kind of thing, I wouldn’t go too far out of my way for it. I mean, you can find decent falafel sandwiches without too much trouble.

Oh yeah I almost forgot, there’s another restaurant/hookah bar (I wouldn’t be too put off by that – if you go in the daytime you can eat without people smoking anywhere near you) called Cairo Restaurant. Same deal, chefs special menu with much of the same dishes. They have koshari too, since it’s an Egyptian place obviously. It’s good, but also no OT. It’s been a while, actually. I’m starting to wonder if I mixed El Mahroosa and Cairo up. Maybe you can clear that up though!

In the valley, We go here, Kobee Factory, for these, after Mr. Gold reviewed them. Tiny little place, order at counter. 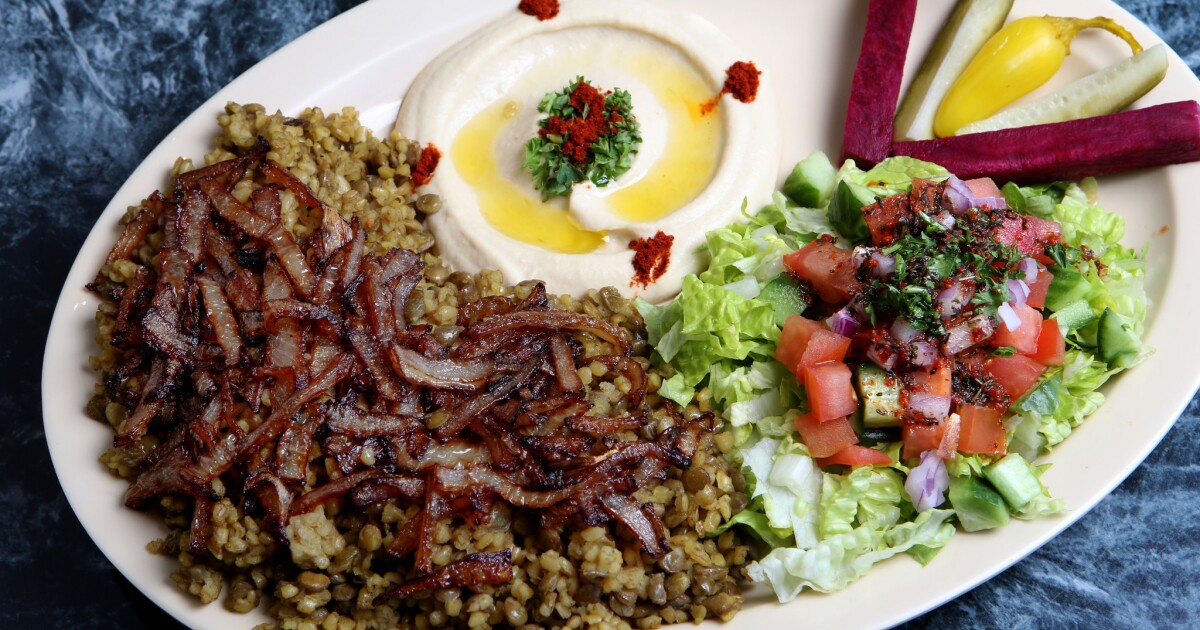 Is it possible to become obsessed with a dish as simple as mjadara?

Oh you’re out of town now? Darn. Thanks for the suggestions on additional restaurants in the area. I’ll have to check them out next time we’re down south.

Thanks for the reminder @Gr8pimpin.

I had this bookmarked but haven’t made the drive yet. What are your recommended dishes you like there besides the Kibbeh? Thanks.

Has anybody been here? It’s right down the street from OT and ZZ. I’ve actually been here a few times mostly for their naploeans and baklava. Since Cheesweet opened up I have not been back. I know nothing about Syrian ice cream but heard the segment on KCRW and am very intrigued. In 2018, Gustavo Arellano wrote for the New Yorker about Le Mirage Pastry, a Syrian bakery in Anaheim making bouza, a chewy ice cream studded with pistachios. The process of making bouza is labor intensive and requires special machinery.

Le Mirage (Anaheim Little Arabia) [image] Arabic Ice Cream. Perhaps the only place that I know that serves Arabic ice cream. I never even knew this existed. Flavor: creamy, slightly sweet, floral/piney, studded with pistachios. Texture: more firm than traditional ice cream. Interesting. For some of you in LA this might be worth a drive over. Glad to try it, but personally I can’t get past the floral notes. For reference at Mashti Malone’s and Sweet Rose I avoid the ice cream with rose …

The LA TImes Daily Dish has a nice video interview and demo of how this is made.

The LA TImes Daily Dish has a nice video interview and demo of how this is made.

What are your recommended dishes you like there besides the Kibbeh?

It’s been awhile but for me the standout is the mjadara. Shish tawook is good, all the kabobs with their subtle differences in spice to other regions are worthy. Stuffed grape leaves.

My wife loves the hummus.

made plans to meet here with my foodiest buddies who live in OC. cant wait

Nice @Nemroz. I hope you make it on a Fri or Sat when they serve the Kabseh Rice w/ Lamb Shanks.