I’ve always disliked melons (of all varieties) growing up because I rarely encountered well ripened specimens. The excessive % of unripened fruit always made me nauseous. However my impression changed recently, I know this is going to sound corny… I picked up some Cavaillon melons from a roadside stand in Provence a couple of years ago. Wow! perfectly ripened, super sweet with the strong musky melon aroma. Completely changed my mind after several decades of hatred.

Anyway fast forward to present day. I haven’t purchased any melons since that week in Provence. Decided to pick one up last week from Underwoods farms at my local farmers market, I was drawn to the strong aroma emanating from the melons on display. Hallelujah, it was wonderful! Deep orange, beautifully ripened and super sweet. Ripened enough to slice virtually all the way down to inedible outer skin and still not encounter any bland tasteless bits.

. They had 4 varieties, their names elude me at the moment. My tip for melon shoppers, pick one up and bring it close to your nose and inhale. Select the one with the strongest aroma and you’re set. Sorry not the best pic

Any other farmers market produce currently at their peak?

Yah, like you, I’m not a fan of most melons, but mainly at the major supermarkets (too many times, not very sweet, unripened, etc.). I like Underwood Farms for some items, but only tried their melons once last year (it was great). Forgot to pick some up this season.

Need to take some pics, but yah a few other items at their peak right now (e.g., peaches still great). Check out Tenerelli Farms for that.

It might be a charentais melon. These have been showing up in spurts at the local FMs over the past decade or so. They can look roughly like a cantaloupe but the skin is usually smoother in varying degrees and can be similar in shape but often more round. The size is often smaller as well.

I have a strong preference for muskmelons, and my overwhelming favorite is the charentais and any offshoot varities. The muskmelon offerings over the past few summers have not been great. But like you, I have found some great ones this summer. I think it might have something to do with the tiny bump in precipitation we had this past winter/spring, creating a more favorable microbiological bed in the soil.

Like you, I follow my nose. Many of the muskmelons can give off a fragrance even when intact. If I can smell the muskmelons before I even see the stand, it’s pretty much a slam dunk.

Plums are great right now, Frog Hollow farms always has nice one. Peaches are great, love the July Flame variety if you can find it. Andy’s Orchard has great peaches but I think they only go to the SMFM. tenerelli orchards also has great peaches. Weiser also has good melons also.

Interesting article in NY Times about peach season, mostly in the South. We have been eating stone fruit since early June and will go easily into August. The donut peaches have been mealy lately so we switched to plums and nectarines. 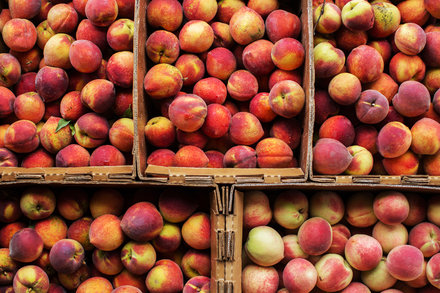 When Is Peach Season? It’s a Bit Fuzzy

Rules are meant to be broken, and the latest is an adage on when to eat a peach.

Check out Tenerelli Farms for that.

When we were on the Westside they were our go to for stone fruit.

At the Irvine Saturday farmers market we’ve been going to Arnett Farms for our stone fruit. They have a great variety at all times. My favorite part about them is they take Apple Pay and on the receipt the vendor name is “The Fruit Lady”.

Peaches are fantastic right now. I think that Tenerelli Farms has the tastiest ones now. WEiser farms has delicious melons. At the far end of Arizona (near ocean) is a vendor who sells delicious watermelons. I really like the small ones. Gloria is selling good small beefsteak tomatoes and Harry’s Berries (alas, no more Gaviotas) is selling large beefsteak tomatoes. All delicious

agreed about peaches. They are amazing right now.

I always like going to Underwood Farms to pick my own produce. It’s nice knowing the produce was grown in a good environment, and PYO means it’s super fresh. I usually take my gloves and some small gardening shears to cut things like lettuces. Never tried the melons but I’ll look for them next time. They do have a product stand at the entrance if you prefer to buy from there instead of doing the PYO.

For tomatoes I love Coastal Organics (across from windrose) but you have to get there early because they do sell out. Are you thinking of Murray Farms for the watermelon?

It’s a smaller stand directly across the street from Murray’s Farm. Also, like the heirloom garlic sold at the stand next to Murray’s farm. Gloria’s has great Blue Lake Green beans now. Lettuce from Coleman Farms is the best, IMHO.

I’m waiting for Gloria’s cayenne peppers to ferment into hotsauce.

I always like going to Underwood Farms to pick my own produce. It’s nice knowing the produce was grown in a good environment, and PYO means it’s super fresh. I usually take my gloves and some small gardening shears to cut things like lettuces. Never tried the melons but I’ll look for them next time. They do have a product stand at the entrance if you prefer to buy from there instead of doing the PYO.

this post intrigued me so I looked into it and must ask…given the $6 entrance fee, how’s the QPR on this? Or is it more of a fun family event thing that makes it worthwhile?

I have been getting wonderful cherries at Tapia Bros. Their cantaloupes are excellent as well.

this post intrigued me so I looked into it and must ask…given the $6 entrance fee, how’s the QPR on this? Or is it more of a fun family event thing that makes it worthwhile?

It’s fun, plus the PYO produce is well priced.

Every Labor Day weekend, they do PYO Roma Tomatoes for $.25/lb. Those are in the fields adjacent to the parking lot, so no entrance fee.

@Chowseeker1999 glad to hear I’m not the only who has low tolerance for the unripened melons.
@bulavinaka Yes, the charantais melon fits the description of what I picked up. Although the one I got has a more defined webbed skin

Will be on the lookout for peaches this weekend. Had great results with white nectarines last week.

Posted this update in the Fruit thread, but adding it here. I got the Arava Melon this week, which was pretty amazing.

Pudwill Farms
Located 80 miles north of Santa Barbara, Pudwill Farms is a regular mainstay at a few farmers markets around town. They predominantly sell Raspberries and Blueberries, including an eye-catching Golden Raspberry, but the best thing to seek out is their Black Mission Figs, when they are in season (right now)!

Pudwill Farms’ Black Mission Figs are some of the sweetest, most luscious Figs out there. I love these Figs when they are in season. Soft to the touch and tender and slightly meaty, but oh so sweet. They were great this week.

Also at Farmers Markets in:

Stone fruit are in season, and Tenerelli Orchards featured the Sugar Lady White Peach this week:

After letting them ripen on the kitchen counter for a day or two (until they were soft), it was time to enjoy! The Sugar Lady Peaches were bursting with juicy sweetness, with a nice aroma.They are some of the best Peaches at the farmers market each week.

Be on the lookout for their amazing Snow Queen White Peaches (my favorite)!

Weiser Farms’ Potatoes are pretty famous and ubiquitous at many local-focused restaurants around LA, with good reason, as their Potatoes have so much flavor IMHO.

They also have fantastic Heirloom Melons when it’s the season, and this week, an amazing aroma hit my nose as we walked past Weiser Farms’ stand (it was that potent and fragrant)! I couldn’t resist and had to get one.

The Arava Melon is a new varietal that I haven’t seen at Weiser (or other stands) recently. It smelled amazing, a slight musky, but intensely beautiful melon aroma. And this is before even cutting one open.

At home, cutting it open after chilling it slightly yielded an even stronger aroma, but the taste was where it really shined: Slightly tender, but still firm, a cool chill, and this deep, melon perfume, more intense and wonderful than a Honeydew or other similar type. A good sweetness but never cloying, one of the better melons I’ve tried the past year or so.

My house and car smell like melons too, lol.

Tie a durian in front of the passenger seat to mask the melon smell.

Talk about a double standard.

When I tried to start a thread about melons, the moderators wouldn’t let me log in for a week!