As one mildly obsessed with hummus, I hope other FTCers find value in a hummus-focused thread. Please post any hummus, homemade or otherwise!

I recently went to newly-opened Hasiba. It’s by the team behind Lodge Bread, per Eater.

They have 4 options for hummus on the menu, each of which have the same base hummus and different toppings. All toppings, other than the original tahini topping, are warm. A single piece of fresh pita comes with every hummus. Each additional pita runs for $1.50.

We ordered the stewed chickpea hummus ($12) and the roasted cauliflower ($10).

Stewed Chickpea Hummus: The topping is actually quite lemony and has fresh dill (which I’ve never had in hummus before) but goes well with the hummus. The hummus itself is very good, above average, but I think I prefer the one at Bavel. The bread is fluffy and seems to have some whole wheat flour but there were some undercooked, almost gummy parts around the edges.

Roasted Cauliflower: Listed as a side, it’s size and price befit a larger role in Hasiba’s playbook, in my opinion. It’s super simple: oven roasted cauliflower (about half a head, maybe a bit less), tahini, herbs, and olive oil. Eating this dish alone or with the hummus is quite delicious.

This is also not to mention the delicious house made spicy red pepper sauce.

Overall, quite an enjoyable trip. I do like the hummus a lot but I probably won’t be making a beeline back.

Thank you for the report on Hasiba. I’ve been meaning to try it along with Bavel. I’ve always enjoyed the hummus at Hummus Bar and Grill.

Usually when I eat hummus it’s homemade. I use this recipe. I soak the chick peas for a full 24 hours. I find this makes the texture smoother. I peel the chick peas. Deb of Smitten Kitchen suggested that peeling the chick peas made the texture incredible. I figured I try it once and would probably not find it worth the effort. It is so worth the effort. When I make hummus, I serve it with vegetables instead of bread. I find that it goes well with sweet vegetables (beets, carrots, colored bell peppers, sugar snap peas).

In the introduction to The Man Who Ate Everything, Jeffrey Steingarten admits that from deserts in Indian restaurants, kimchi and dill to seas urchins, chutney and falafel, his list of foods that h…

I’m looking forward to trying out the recipes in a recent Ottolenghi column in The Guardian devoted to hummus. Unfortunately, my food processor died a couple of weeks ago. My new one should be delivered in a week or so. 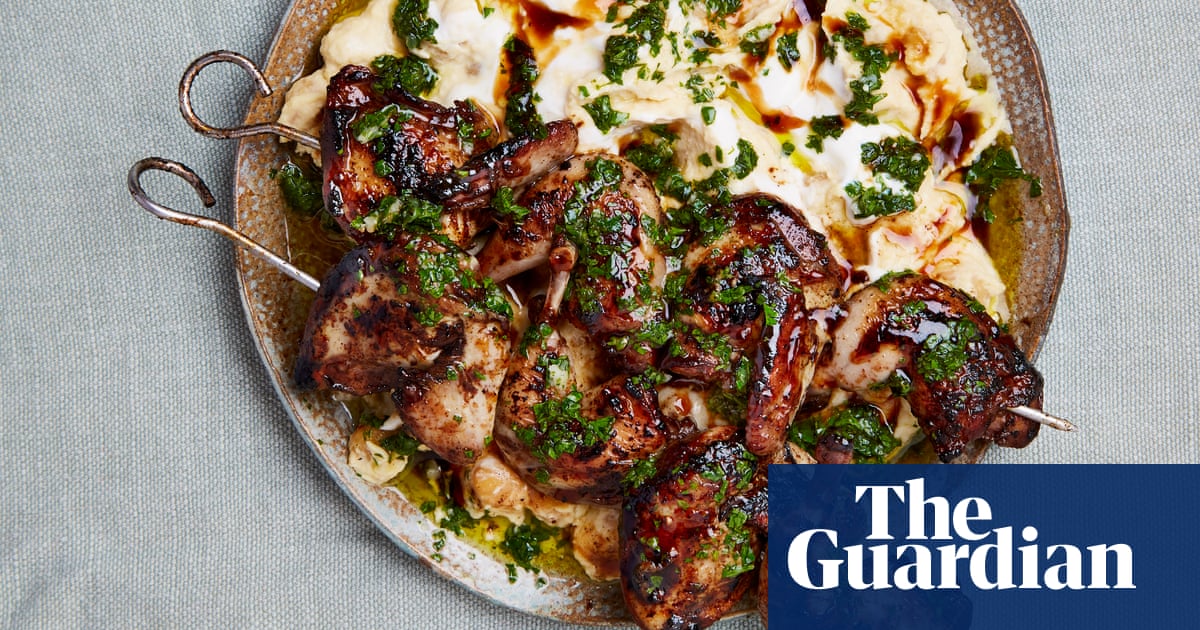 Up your game by serving it on aromatic cinnamon and ginger oil, or with roast garlic and mushrooms, or even under marinated grilled quail skewers

Thanks for the recipes! I usually make my own too, but I have never been completely satisfied with it as much as the best hummus I’ve had. But it’s usually better than most hummus from restaurants.

The wild mushroom hummus at Hasiba is sublime. Sorry to hear that your pita was lacking because the one I had was cooked perfectly and made a great tool for scooping up the hummus. Haven’t tried the hummus at Bavel so will have to put that one on the list!

Overall, quite an enjoyable trip. I do like the hummus a lot but I probably won’t be making a beeline back.

I just got back from Hasiba. I agree with you that everything tasted good, but I’m not planning a return visit. I like my homemade hummus better. I thought the pita lacked flavor.

I had a disappointing experience at Hasiba. The pita itself was gummy and not hot. The hummus was pretty good but lacking in salt. And then the Israeli salad was basically a disaster.

The thing is, it’s pita and hummus, so it was pretty good. Like pizza, it’s hard for it to be bad. But I won’t be going back; they’re charging premium prices for pita/hummus and it needs to be better at the price point. Maybe I just caught it on an off day; I’ll watch other reviewers.

The Israeli salad I had at Hasiba…really haven’t had a worse one, including from like gas station falafel places. Mine had huge chunks of raw, unmarinated carrot that totally didn’t jive texturally with the rest of the salad. I’ve had it with carrot in Israel but never like this.

Wow, I gotta make my way to HBaG. Some big accolades.

Yeah it was really the pita that killed it for me above everything else. Like it was actually semi raw in some places. And this is supposed to be the Lodge bread crew so that was a let down.

Much of my preference is based on personal taste. I like hummus to have a fluffy, not dense, texture. Hummus Bar and Grill’s is fluffy.

I like that the laffa is hot and freshly made. I like the variation in texture; the thin part in the middle is crisp, the fat parts on the edge are soft.

When you go to Hummus Bar and Grill, I recommend that you order the deep fried cauliflower. It’s an indulgence especially so if you dip it in the provided tahini, but it’s worth it.

I’m suggestible where food is concerned. This post made me go to Hasiba. If it wasn’t 7,000 degrees in the Valley, I’d be on my way to Hummus Bar and Grill.

I don’t eat meat, but I’ve heard from several sources including Jonathan Gold that you shouldn’t order the meat at Hummus Bar and Grill.

I actually prefer the hummus at Hasiba over Bavel. Pita, too.

I have recently eaten at Bavel, Hasiba, and Jaffa for their hummus (among other things), and you know, Hasiba and Bavel left me wondering what hummus actually ought to taste like? I’d never quite had hummus like this before, it seemed to be more of a lightly nutty mousse compared to the chunkier hefty texture and earthy funk at Jaffa (which reminds me much more of hummus at places like Zankou or Ta-Eem Grill to me), the stuff at Hasiba and Bavel seems almost like a different dish to my poor palate.

Can anyone educate me to help me refine my hummus tastes?

IMHO, I think Hummus should taste period. I’ve had so many that didn’t add anything but lubrication. It’s a balance of the chickpea and tahini, sea salt and olive oil. Too much lemon, zaatar and other spices are just too distracting. I too am a HUGE fan of the Hummus Bar and Grill Hummus (They used to sell at Whole Foods but it appears they got out of the packaged Hummus business. You could pair that with the pita from Bibis and be in heaven.

I’m sure your palate is fine; eat what you like. For me, less is more when it comes to hummus. I like my hummus with nothing but chickpea, garlic, tahini, olive oil, and salt. Some paprika and greenery on top may be added for presentation’s sake.

Importantly, chickpea should be the prominent flavor with olive oil a distant second and tahini a close third. Garlic should play a faint background note. And importantly, the texture must be nothing short of insanely creamy, making you question whether some other ingredient was added.

This profile largely skews towards the Lebanese style of hummus. Looks something like this (picture from Google but I’ve eaten at the restaurant):

This may be why so many of these new hummus spots don’t do it for me, as they skew towards Israeli hummus, which packs in the tahini per my reading on the subject in one of Michael Solomonov’s books. Certainly there is nothing wrong with Israeli hummus; I just prefer the Lebanese variant.

I was honestly baffled by the pita. The wheat base is not a good one. But even putting that aside, I actually ordered an extra because they told me they were making the batch to order right there. Then it comes out not hot at all.

I’m not a huge fan of the bread at Lodge either, so I guess it’s not that surprising.

Oh ok! Well, thanks for the tips!

I must say, to my rather ignorant tongue, I’d never had hummus that was so extremely smooth until I ate at Bavel/Hasiba. But it sounds like that’s actually how it’s supposed to be in texture huh? So interesting!

Sorry if this is stupid, but which restaurant is your photo from? The Hummus Bar and Grill place everyone is discussing?

The best hummus I’ve had recently was from Dune. I also second the Hummus Bar rec. Still haven’t tried Bavel yet but it’s at the top of the list.

I thought Hasiba was good not great. The mushroom hummus was very good when warm. But the chunks of mushroom were less appetizing when cold, and I agree with @Haeldaur the hummus itself needed more salt.

Sabich sandwich was solid, but I was thrown by the fact the menu advertises the eggplant as “crispy,” which it’s not. The potatoes were basically boiled french fries. The only textural contrast was from the pickled vegetables, which were nice and crunchy.

Ultimately, I’m just more a falafel guy. If they ever start serving falafel, I’ll probably give them another shot.

Truly, some Lebanese restaurants make their hummus so fluffy and creamy it almost has the same mouthfeel as the cream one puts on their morning bread. That can be too creamy for my tastes in actuality but it just gives you an idea of how creamy hummus can get in the right hands.

The picture I posted is from one of my favorite restaurants abroad. I omitted the name because it’s of little use in an LA food talk forum lol.