I’ve enjoyed the version at Madeo but am looking for another option, preferably east of La Brea but given the rarity of the dish, any solid recs will do.

Also, any suggestions of where to buy bottarga in LA so that I can make it on my own?

Piccolo Paradiso had a nice batch with some fresh orange bottarga for me last week. Sometimes if I’m feeling crazy I add the little clams. It’s off menu but thy have it most of time. Call ahead and ask fabritzio if any doubt. Also get a plate of grilled langoustinos to share !

Yes, I recently had Sotto’s spaghetti with bottarga delivered via Caviar and even though it suffered in the process, arriving congealed, it was still amazing!

Try Kiriko’s own karasumi - absolutely delicious. I don’t remember which month it’s available but they make it every year.

Even further west than Sotto, Santa Monica Yacht Club has a nice simple version that was really delicious!

Bestia often has dishes with bottarga and they cure their bottarga in house. It is definitely east of La Brea. Here’s the link: Bestia is a chef-driven multi-regional Italian restaurant in the Arts District in DTLA by Ori Menashe and Genevieve Gergis. Make a Bestia reservation here.

Angelini Osteria also often has dishes with bottarga. It is west of La Brea but pretty close. Here’s the link:

Both restaurants might be willing to make you a simple spagetti with bottarga even if it’s not currently on the menu if you ask nicely.

I’ve been to Bestia once and didn’t see any bottarga on the menu, so this will give me a reason to return. Thanks!

Just to clarify that the “bottarga” listed with the uni pasta is squid ink bottarga (ie. dried/cured squid ink) not mullet roe bottarga.

I just order it online and grate it over spaghetti with olive oil, garlic, and parsley.

I saw that the bottarga dish that is currently on the menu is squid ink bottarga. Bestia seems to switch up their bottarga, sometimes squid ink, sometimes mullet roe, sometimes tuna roe, etc.

I saw that the bottarga dish that is currently on the menu is squid ink bottarga. Bestia seems to switch up their bottarga, sometimes squid ink, sometimes mullet roe, sometimes tuna roe, etc.

The main change to that uni pasta dish these days is that they now add lobster and have jacked up the price to $32 a dish.

I have never seen tuna roe in place of the squid ink bottarga for the uni pasta dish. I’m not there every day of course but have been close to a dozen times since open.

@theoffalo that looks delish! Thanks for letting me live vicariously through your pix.

where to buy bottarga 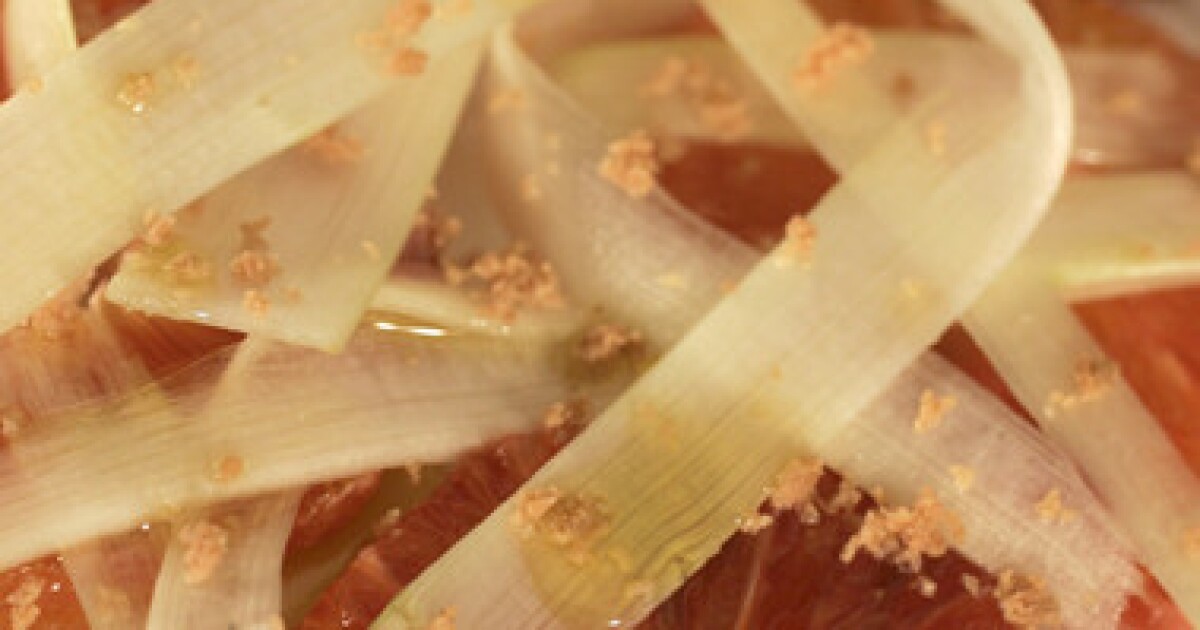 Where to find bottarga in the L.A. area

Remember that whole pieces of bottarga di muggine average 3.5 to 7 ounces, so while a piece of the cured roe might cost $30, it will take only an ounce to make a spaghetti alla bottarga for six — $5 to $6 worth.

I have bought bottarga at Guidi Marcello in Santa Monica.

while there grab that fucking incomparable, iconic, idiosyncratic butterscotch pudding of your fucking dreams.

it’s so fucking good, it’s verging on the surreal.

Also, any suggestions of where to buy bottarga in LA so that I can make it on my own?

You can often find it at Hawai’i Supermarket (in San Gabriel, corner of Del Mar and Valley).

Look for “wuyuzi” or 烏魚子. But whatever name it goes by, it’s dried cured mullet roe.

I like to make a mullet roe sandwich using pan-fried mantou, which is just as savory as the Scardanian version grated over pasta, but much more portable.

I buy bottarga at Bay Cities Deli, if you are in Santa Monica…

I second bay cities. I’ve also bought it on amazon.

Yes I’ve bought it before at Guidi Marcello.

Just did it at home with bucatini, olive oil, garlic, parsley. And a cool vermentino (Vigne Surrau ‘Sciala’ which is also great with grilled scallops/chanterelles/peas after). I’ve done it with spaghetti (always using Monograno Felicetti spaghetti when making seafood pastas), but bucatini is quite nice since you get the olive oil and bottarga oozing through the center.

Oh and btw they had Alba truffles last year for $130/oz…not sure how much this season. But, it’s basically one-stop shopping for the Spaghetti alla Bottarga and then Tagliolini con Tartufo Bianco “1-2 punch” (to weave the two threads together).