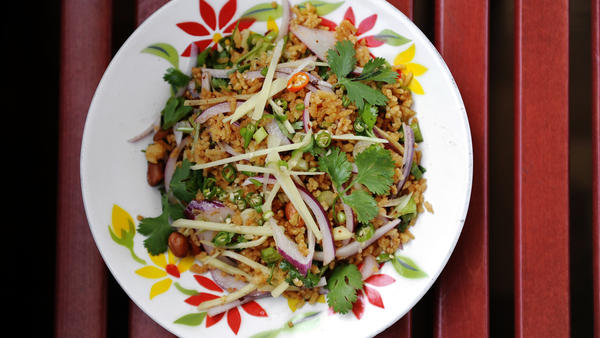 That’ll go well on this board.

That’ll go well on this board.

I thought the same thing. And Q.

ink. seems to be a far stranger item on this list. Having been there twice, I was not particularly impressed by the food, especially given the price point. Maybe if you could eat there for $40 a person and not come out hungry it would be worth it, rather than twice that. The best item on the menu being baked potatoes is also pretty iffy.

Is Shibumi the fastest rising star to even open in LA (in terms of Gold’s list anyway)? June opening -> declared #2 restaurant in the city in October.

It’s unusual; as much as I love Shibumi, I am guessing no one else will agree with that.

Even though it’s pretty polarizing…it’s shocking not to see Hatchet Hall on the list at all, but then it’s never even been reviewed. I guess Hatchet Hall is my Mori.

However, though I might’ve predicted Shibumi, I could not have predicted #4 being Spring… have only heard bad to mediocre things about the place.

Actually, it’s a little surprising Kali didn’t make it either.

I’m glad to see Maude falling consistently in rank though. Sad to see Love and Salt not make it.

Did anyone else read the list with pictures and walk away just really craving Alma’s patty melt?

I liked Shibumi - the heritage pork is my favorite dish of the year thus far - but to rank it as # 2 makes me think there is either some kind of pay-to-play going on (I think this is less likely); or that making such a bold, sure-to-be-contested-ranking-of-a-new-joint, move simply garners attention to Gold and his list, as well as the restaurant (this, the more likely explanation, IMHO). Putting Spago or Urasawa or Valentino at #2 - though they may deserve it more than Shibumi - would just get a big ol’ yawn, not the eyeballs that journalists, editors, and publishers crave.

I like to think the choices may be at least somewhat genuine and not totally media-frenzy driven, but I guess who knows.

Taco Maria being at #2 wasn’t a scandal was it?

I am also shocked that Charcoal didn’t make it onto the list.

Shibumi don’t belong in the top 50.

Kogi BBQ is not a top 100 restaurant by a long shot. I’ve eaten there plenty of times (it’s convenient and my friend is a masochist). Alibi Room is a 1000 times better if you don’t want to chase the truck.

What the fuck, shibumi #2 and kinjiro isn’t even on the list. Okay rant over, moving on.

Agreed. I had a very meh meal at Shibumi with some of the most disinterested service. Kinjiro’s food and service are far superior to me. Raku as well.

the funniest thing about lists like these isnt the discussion of the lists’ content, but the rather perverse speculations about the motivations behind said lists.
yikes.

This pretty much says all that needs to be said about this list:
21. n/naka

While I have nothing but respect for the depth and breadth of J. Gold’s knowledge about the Los Angeles food landscape, and while I don’t doubt his integrity in making these selections (i.e., I don’t believe he is susceptible to quid pro quos), I do believe that his outsize fame and influence distorts his experiences at restaurants to the point where they share very little with the experiences of plebes like us.

How else could one explain Q Sushi being placed at #10 over the likes of Zo and Mori? How else to explain Marouche being on this list year after year even though it’s cuisine, while not bad, is tired and can’t hold a match to the Lebanese fare at Carnival? And Otium at #27, nuff said.

He is such a recognizable person since his pix were posted after being awarded the Pulitzer. I remember first spotting him at Lucky Noodle King on Valley. He looked so out of place at first. Once I realized it was him, it all made sense. And I then realized that I’d seen him (or maybe someone like him) at other places in SGV in the past.

And I don’t think he was in work mode either (but one can argue that he is always in work mode when eating). This was after he had written on the SGV Szechwan places a handful of years back. I’m guessing he was just in for some dan dan mian.