Anyone else think that Baco Mercat, Bar Ama, Ludlow, etc. are vastly overrated? My opinion is these restaurants are grossly inferior to unhip restaurants like Drago Centro and Water Grill, but the food intelligentsia act like the Centeno restaurants are amongst the best in LA. It’s like a backlash against well-prepared food. Bigger, bolder, and amateurishly prepared is all the rage in the LA food scene.

No specifics of course, just felt like using the forum as a place to wine based on nothing, or hear people agree with a popular opinion to have a bit of a circlejerk? One wonders if you’ve even dined at the establishments.

shrugs go ahead and malign the places to score some “cool” points, won’t stop anyone from enjoying the places, who didn’t already think it was cool to hate them because of their popularity.

Completely different styles of restaurant but I never cared for Baco Mercat.

I like Bar Ama quite a bit food and cocktails both. Baco Mercat has been more hit and miss I like it more if you can snag a bar seat for a couple apps and wine.

Although I’ve lambasted it in the past, it seems they’ve fired a couple of people and hired some somewhat better FOH people at Bar AMA.

The cooking is good enough that I am willing to go back despite multiple experiences with horrible service.

Tonight I stopped in for some tortilla soup and a cocktail, which they graciously allowed me right at their closing time, despite having just missed last call.

Perhaps some posters will get pissed off about paying $15 after tax and tip for a bowl of tortilla soup, but I thought it was a beautifully laid out plate. A great clarity of flavor of the simple broth, with the guajillo and poblano shining through the nose, and a very slight saccharinity from corn and onion undertones. The grilled chicken was perfectly done, moist, yet with superb char that added just the right dimension to the soup along with a whole fresh avocado, an even application of cojita, and the delightfully crunchy, savory tortilla strips. A remarkably balanced, and utterly delightful dish. Is there anywhere else in the country that one can go to find a strain of Tex mex cooking with such perspicacity of flavor, balance of palette, and quality of ingredients?

The Nacho cocktail was the perfect, light, zippy, and tangy cocktail to accompany the soup. An expert use of campari, honey, tequila, and chile-lime shrub for a sour, bitter, sweet, tart, and slightly smokey effect. For $11, there may be no more inventive, playful, and delightful cocktails in the area. Maybe not the best cocktails in the city, but certainly underrated.

I know it’s common to throw shade on places white people eat a la David Chang n’ shit, but to be honest, I was one of the few white people in Bar AMA when I was there. Mostly Latino customers, and some Asians.

This was a $30 comfort stop in DTLA, that may be a bit rich for many, but I felt it was easily worth the money. I can see how this stuff probably pisses some people off, but I enjoy it thoroughly, and find almost nowhere in LA quite as comforting as Bar AMA when it is at its best. It’s the kind of place that makes me feel connected to the city in a particular way, because I don’t believe I could have the same experience anywhere else; I could be wrong about that, of course, but it at least evokes that feeling for me, and that’s something special to me, perhaps there are others who might feel the same.

it’s really not. when people attempt that kinda bullshit, i just kinda pity them
for not realizing their own inability to deal with aging out of a demographic.
it’s really an attempt to appear hipper than thou that’s both ironic and transparent.

around here, it’s mostly the sole provence of a thankfully mostly absent la expat (well,
they recently returned to spread their poorly written bigoted nonsense) poster posterboy
for the ‘get offa my lawn’ brigade.

ain’t no writers around here named coates talking about race, so why give it respect? i will
eat something prepared by a puce person whilst surrounded by purple with pink polka dotted people if
it tastes good.

that’s why were here, right? to talk about good tasting food? 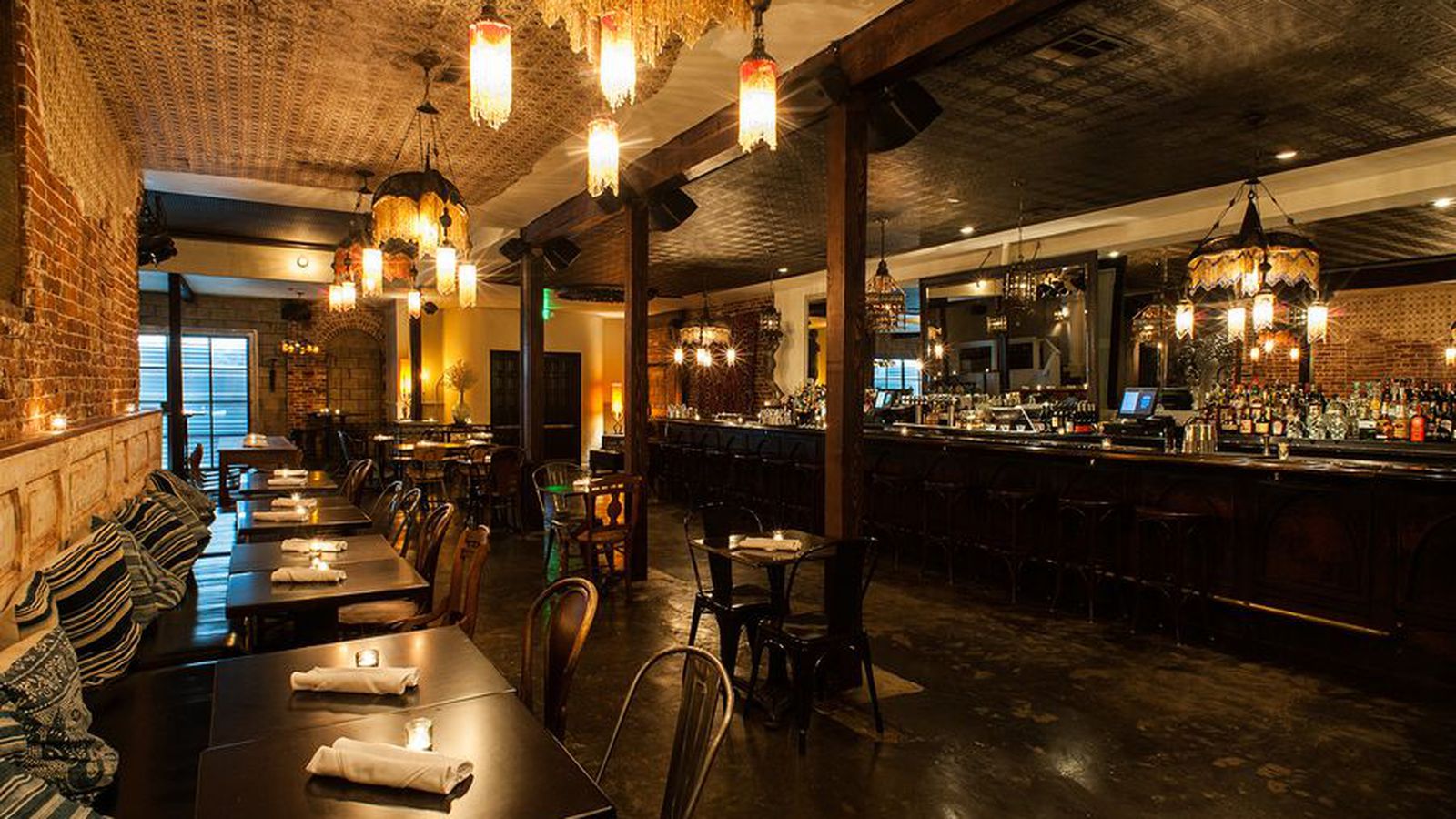 70 -- If You're In LA, It's Not Worth Eating At A White Person Restaurant

Seems like there’s a decent amount of shade getting thrown around. I guess it’s only “fair” in some sense since there has traditionally been an idiotic view of non-white restaurants as “shitty”, “dirty”, “dangerous” etc… but it certainly seems like the backlash exists.

that’s why were here, right? to talk about good tasting food?

Hence my post about the very good tasting food at Bar AMA. I also found a bit of pleasure in taking the piss out of these people saying white people restaurants don’t make food worth eating… but then again I’ve literally been raiding white people restaurants today: Knead & Co, Clark Bread, Sqirl, Guerilla Tacos… I guess David Chang would lynch me… =(

as with many other words, your definition of common and mine are different.

I know…I am in total disbelief that he is the person spouting this stuff. He is like the poster child white person restaurant chef… it’s like that episode of Chappelle’s Show where they have a blind African American that is a leader in the KKK…

Having just spent way too much cash at Momofuku Nishi, I agree with this one hundred percent.

Damn I hate podcasts. Can you sum up what he says about “white people restaurants.”

He basically says that there is no possibility that the cooking in places like Animal and Trois Mec can ever be as good as the cooking at random “ethnic” places. He isn’t even really very specific…he literally says like any taco truck, or Korean restaurant, or anywhere not run by white people is de facto superior. He says this is only true in LA though.

He has a “sub argument” where he suggests that the main reason is because in NYC white people restaurants are so fucking amazing that it’s pointless to go to them in LA, whereas ethnic food in NYC apparently sucks ass. Apparently it sucks in SF as well, he spends some time wondering how SF has the worst Chinatown in the country…

At some points he hints that his argument isn’t exactly absolute, but is basically highly contextual in the sense that he is saying, “If someone from NYC visits LA, and they only have 1-2 days there…where should they eat? I say, you should never tell them to eat at Animal, Trois Mec, etc…”

I am almost sympathetic to that argument, but it seems too extreme to me. I for sure think that one ought to put a trip to Tire Shop Taqueria on the same list as Animal, but I can kind of see his point in that hyper limited case.

That’s what I find so absurd about certain people from NYC…they don’t even go fucking eat the food they deign to criticize, but they proclaim that it is an absolute fact that NYC is 100%, across the board better than LA. Perhaps if these people ever bothered to go eat the fucking food they would realize how far up their own asses their heads are and get a whiff of the bullshit they are spewing.

On the opposite end, some other guy debates him with the weirdest responses ever. This other guy counters at one point that he would tell someone from the South in LA for only a day to go eat the biscuits at MB Post still. Chang challenges that he should tell them to go eat at a random Korean place instead, and demands the guy say “would you really say to eat biscuits instead of awesome Korean food??” and the guy is like “I’d tell them to eat some biscuits, and go get Korean for dinner”.

I don’t know, the whole thing is really just one huge argument about New Yorkers if you break it down I guess.

Personally, that’s how I like people that visit here to experience LA. When I have friends here, they just eat whatever is best. I’ve had friends in town for 1-2 days eat at Chi Spacca one night, and dumplings all over the SGV the next.

I think Chang’s argument only applies to super uptight NYC people that only eat at super high-end places who don’t even consider hitting up a Korean place other than like POT… he has some point, but it’s ridiculously stated as a series of general arguments that are borderline nonsensical, I’m kind of interpreting his meaning with a lot of contextual cues. He’s a horrible communicator, and kind of seems ridiculously obsessed mainly just with Korean food in LA.

Leave Clayton out of this!

i love podcasts but these people are laughing and talking over each other… this would give me a migrane if i listened regularly.

if it helps anyone else the segment starts at 14:15

70 -- If You're In LA, It's Not Worth Eating At A White Person Restaurant

you have the patience of a saint! I listened to the first 5 minutes and it was pretty awful.

I’m a very big fan of Bar Ama. I think the cocktails are terrific and really like the food, especially the off the menu puffy tacos and some of the smaller vegetable plates. Service has been solid the 4-5 times I’ve been there. It’s also a great location prior to heading to shows at the Regent. Come to think of it, it’s one of the few restaurants I consistently return to downtown, which is a real testament to it, given how many new places I always have on my list to try.

I wasn’t crazy about Baco the one time I went, although that was when it first opened. I’ve heard enough lackluster stuff from others that I’ve never revisited it.

Shout outs to Lazy Ox, which was great the first few years it was open and then went downhill the 3-4 years prior to its demise. (Albeit “great” was by LA standards at the time. We’ve come a long way in 5 years.)

Where are those taquitos from? Bar Ama?