Korean food is the final frontier for me. It has always seemed strange to me. I spent three weeks in Korea and left thinking that the food was not very good. But lately, I’ve been trying restaurants in KTown, and I have been impressed by the high quality of the ingredients and the seriousness of the cooking. My new hobby is trying new dishes in KTown.

So tell me – where should I go, what should I try? I’m not a big meat eater, but I’ll eat meat if it’s exceptional quality. (To put this in perspective, I’ve eaten Japanese wagyu beef on dozens of occasions and an American hamburger twice in my lifetime.) I do love seafood.

The raw sea snail salad at OB Bear nearby is really good, not as challenging as it might sound. Goes great with beer.

Ironically, I went to Jun Won today and ordered the black cod (thanks to Yelp of all sources). It was great. I thought to myself that black cod (a.k.a. sablefish, gindara???) is the best fish in the ocean. For one of the first times in my life, I truly enjoyed the Korean sauce that the fish was cooked in. I liked all the panchan too. This restaurant was particularly appealing because, as you say, it is such an unassuming, homey place.

I definitely need to try the raw sea snail salad. That’s totally up my alley.

it’s 3 years old, but jonathon gold’s list of things to sample in K-town is a good start.

while in most cases each place has a specialty that works for the single diner, there are enough places where i would recommend going in a group so as to try a broader variety of the things a restaurant offers. plus a lot of the AYCE KBBQ places require at least two in a party.

Ondal 2. It is not in K town, but very close. Spicy crab soup is great. 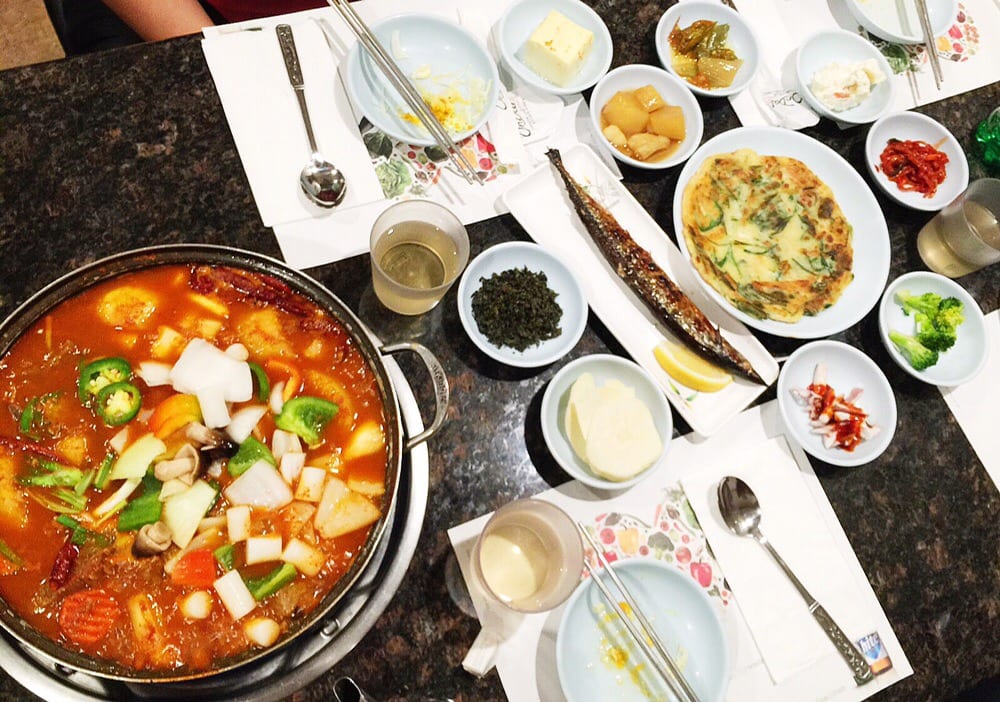 jonathon gold’s list of things to sample in K-town

i did lay the fence by mentioning that the list is over 3 years old. one clunker in 60 is still 50 times better than yelp.

one clunker in 60 is still 50 times better than yelp.

My 2 favorites are Beverly Soon and Soban. At Beverly soon, the soon tofu (spicy) with kimchi and pork is great, as is the fried tofu. Actually really everything there is good.

Soban is more expensive but the spicy short ribs and the raw crab are both great.

If what you want is a list, at least for BBQ, this one by Eater LA is a good reference point.

And this one, also by the aforementioned Eater LA covers those non-BBQ places.

I tried Beverly Soon Tofu at your recommendation. I loved it. The tofu stew was about as comforting as food gets. I also enjoyed the barbecued squid, which was relatively tender and had excellent char and a delicious sweet marinade. Panchan were average at best, though cold tofu with shredded nori was exceptional.

I have been to Soban a few times before and think it is great too. The raw crab is probably the best dish I’ve had outside of Japan this year.

KBBQ is what most people think of. there’s so much more beyond that that it seems a shame to just try KBBQ for a while.

Glad you liked it. Beverly also has the advantage of being extraordinarily reasonable for what you get.

Hangari for their clam kalguksoo.
Mountain cafe for the abalone porridge