I love noodles and fried chicken and sushi and pizza. But the one thing I just live for is a good and well composed salad. Substantial, well thought out, and with an excellent dressing. I’ve stopped going to places because despite having wonderful dishes, they have had AWFUL salads and I don’t even want to know what % of my overall dining budget is spent on overpriced Chicken Cesar Salads (my favorite).

So when I heard about Urban Plates, especially after an opening service that supported the Boys and Girls Club, I could not wait to go.

Half of Silicon Beach had the same idea though and it was CROWDED, made worse by their badly thought out entrance. They have a similar layout to Lemonade and similar concept of salads and sandwiches and braises and desserts. Tender Greens fans will find most of their favorites complete with fancy greens here too. Even though the entrance was crowded, we were quickly ushered into salad and entree lines. If there was someone wanting a braise and there was no wait at the braise station, you could go ahead. They had THREE checkout stands and an excellent POS system so that my check out was quick and painless.

I of course got the chicken cesar salad which was wonderful. It hit all points, with good chicken, good dressing, excellent greens and great croutons. MUCH better than the awful CCS at Tender Greens (They don’t even try). I also picked up these giant chocolate chip cookies for my team. They were ‘butterless’ but really good. Next time I SO want a slice of their Hummingbird Cake! I finished it all off with one of their fruit drinks, which was a no sugar added Pomegrante, Cranberry, Apple, Ginger combo. It did not cost $8 like one of those fancy cold pressed placed and was actually tastier than most of those.

The only things that were a miss was the grilled bread that came with the salad (meh) and their pizzas come with a pre-fab crust. But overall, I’m happy to have this as a lunch option! They will also be opening in Pasadena soon (and have a few locations in OC) 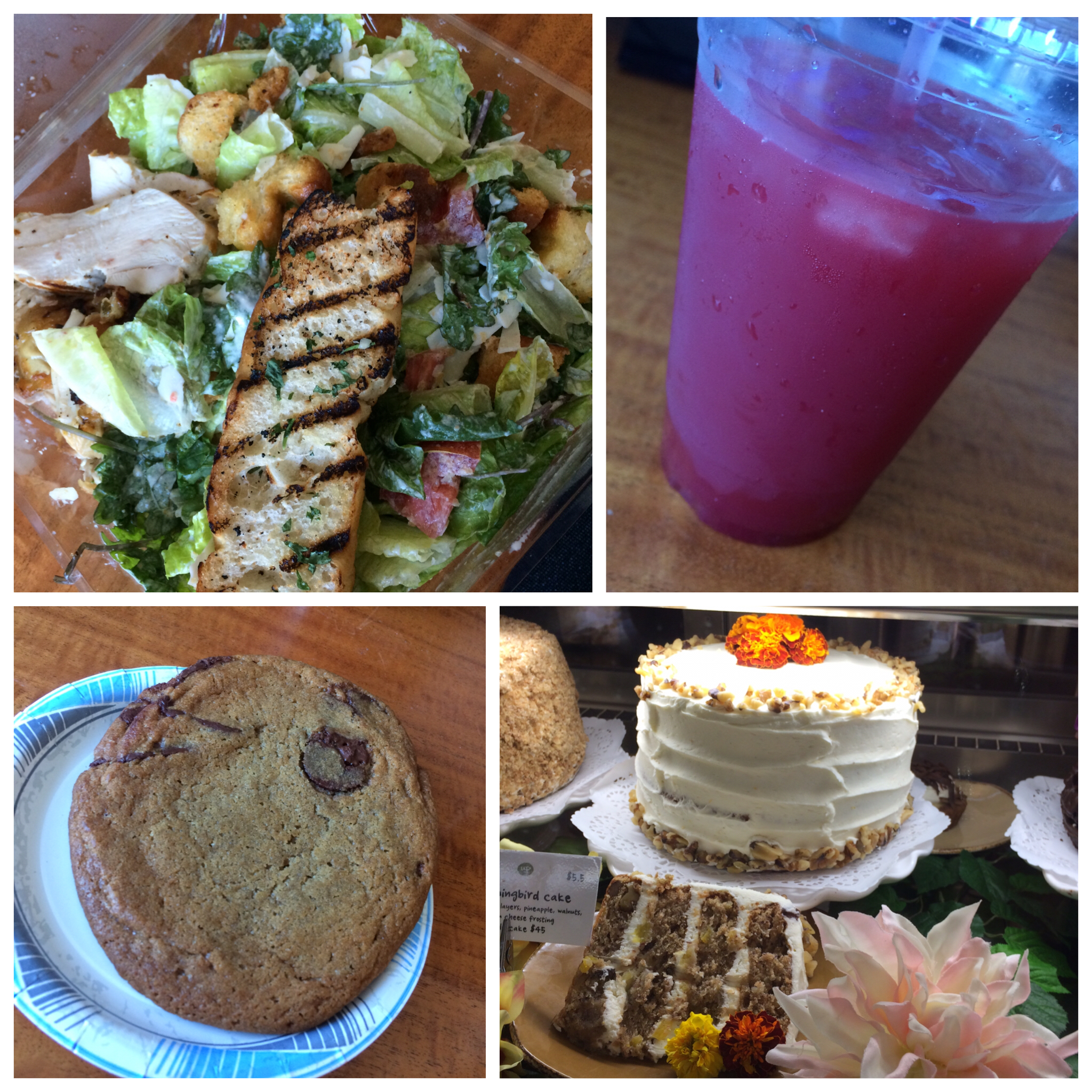 That is the hummingbird cake. It does not pretend to be anything but a sugar bomb not a single shred of carrot in there.

Went to the one in Irvine. Loved it. To some extend: Urban plate > (Lemonade + Urban Plate). Still would hit up on Lemonade vegetable plate for value though.

Only been to the one in SD (near Del Mar), and enjoy many of their items.

The Hoisin Salmon is like Peking Duck made by Aquaman, and if I had to choose one thing to be buried alive in, it might be Urban Plate’s banana cream pie, which, if you don’t know, is sort of like an overgrown cupcake with a graham cracker crust, with sliced bananas, and vanilla pastry cream, drizzled with rich caramel sauce, then topped with whipped cream, and garnished with matchsticks of chocolate shaving.

The Hoisin Salmon is like Peking Duck made by Aquaman

I don’t do Salmon (at dinner tonight I got in trouble for picking at my black cod. ick.) but now I know what to temp P there with!

Oh… after spotting the Humingbird Cake I purposely ignored the dessert case and only got the cookies because they were right by the checkouts and they sold it in a 3 pack so I could justify it as a ‘treat’ for my two DRs. I LOVE pie though and will keep an eye out for it next time.

ok,
how do i find this place?
it looks like it’s near the whole foods somewhere
which entrance?
upstairs or downstairs

how do i find this place?

It’s on the same level as Whole Foods, on the opposite side in front of the CVS. The only thing slightly annoying is that on that side CVS has labeled a lot of their parking ‘theirs’

But Since I usually mix it with a visit to Whole Foods and I am on the look out for them to finally install an electric plug, I park in the lower level.

Went tonight before seeing the new disappointing 007 film. The restaurant is directly one floor below the movie theater. It truly is the love child of Tender Greens and Lemonade if they ever got married, in fact I liked it much more than Lemonade. Everything on the menu is $11. I had their Grilled wild albacore nicoise salad with green beans, egg, tomatoes, capers. olives in a mustard champagne vinaigrette. Very friendly and helpful service. They even have curbside pickup for to-go orders. I shall gladly return.

thank you!!
will give it a try in the next couple of days.