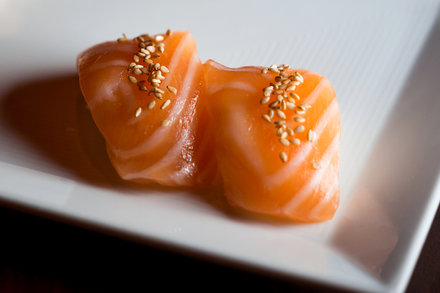 Testing the Limits of Trust, and Sushi, at Sugarfish

The New York branch of a Los Angeles chain has plenty of efficiency and customers, but the fish options can be limited.

Mark my words, there will be at least 3 outlets in NYC in a couple of years.

I’ve always felt a little confused by what sugarfish was trying to do. I know it’s descended from Big Baller sushi, and this was a more modest version. But the price point was always… weird.

It was definitely more than “hey let’s hit sushi before/after the movie” but not quite into the lower end omakase.
I only ever went to the Santa Monica or Studio City locations, but they were inevitably crowded, noisy, and I always felt rushed. The fish was certainly a cut above SuperGodzillaDynamiteRoll but then they’d drown everything in ponzu.

It just always seemed to me that I could have paid about half the price and gotten a cheap sushi special that would have been in the ‘tasty and filling’ category, or about 30% more and gotten some broader choices and higher quality.

I guess it’s a QPR argument. Sugarfish’s has never quite stood up. I don’t know jack about NYC, but it sounds even more cutthroat than Los Angeles, restaurant-wise. Is there that much call for this particular level?

I don’t know jack about NYC, but it sounds even more cutthroat than Los Angeles, restaurant-wise. Is there that much call for this particular level?

Is there that much call for this particular level?

Yes, but (in my opinion), we already have a pretty decent number of places for mid-price, good quality sushi. What’s keeping me away from Sugarfish, other than the lines, is that the selection is so ordinary.Tuna. Salmon. Yellowtail. Shrimp. Yawn.

Can’t argue with success, I suppose.

I read that review Sunday and thought that it will be a huge success. I know nothing about sushi and rarely have it. But I know and read about people for whom those choices would be perfect. And they’d definitely mix their wasabi in their soy sauce

Mark my words, there will be at least 3 outlets in NYC in a couple of years.