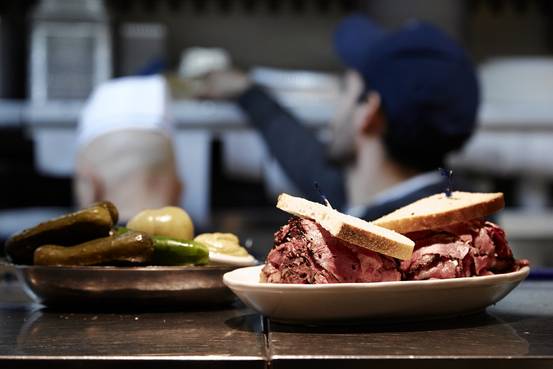 The new 2nd Ave. Deli’s pastrami was not as fatty as it should have been when I had it in 2008. I wonder if they’d make the cut if not for nostalgia’s sake?

The best place to eat it is probably Langer’s in LA.

Agreed, although the article refers to Wexler’s as LA’s “new pastrami king.”

I’m now on a super-low-salt diet, so I probably won’t be having any pastrami for a long time (maybe after i lose 20 more pounds and my blood pressure is well-controlled), but what do you guys think of her lineup? I’ve never been to Harry & Ida’s. Is it your favorite for pastrami?

My last trip there, I thought their smoked eel sandwich was great.

Smoked eel sounds like something I’d like a lot, if I can ever eat salty food again someday.

ipsedixit, Since Harry & Ida’s has no seating, where did you eat your food?

We’re big fans of the pastrami at Sarge’s. Different from Katz’s – also a favorite but less convenient for us – but just as delicious. We always request “very fatty” and are never disappointed. The sandwich is so huge that we share half and take the other half home.

The first time we went to the 2nd Ave. Deli shortly after it opened on 33rd St., we ordered the pastrami. Even though we requested very fatty, what arrived was meat as dry as the proverbial shoe leather. We’ve since been back many times but instead always order the knoblewurst which is excellent.

ipsedixit, Since Harry & Ida’s has no seating, where did you eat your food?

There’s no way we’d eat in a cab, so we’ll wait until the weather warms up when we can sit outdoors in the park a couple of blocks from H&I’s.

That’s what I did when they first opened.

H&I’s pastrami is excellent; l’ve yet to try the smoked eel, but l’m looking forward to it.

If you like tongue, try it at 2nd Av. Deli. Assuming (as I would tend to) that the quality hasn’t changed in a year or so, it’s great though expensive.

I do like tongue – the fatty center cut – but not as a whole sandwich. In the past, I’ve bought tongue to take home along with pastrami, corned beef, and salami – about a 1/4 - 1/2 lb. each – and then put all the meats together in a combo sandwich. However, I’ve never done this kind of take-out at the 2nd Ave. Deli. That goes back to years ago when my parents moved from Queens to Brooklyn. They were close to the excellent Mill Basin Deli, so I usually stopped there on my way home to NJ to load up. There is one way I like to eat tongue on its own. I take a slice, smear on some mustard, and then wrap the slice around a tiny gherkin. When we go to the 2nd Ave. Deli, I often buy a section of knoblewurst ring to go. Now you’ve got me thinking about adding some tongue next time.

Try the tongue and see what you think of it. I’ve liked tongue ever since I first tried it, when relatives brought over cold cuts after my grandmother died. I was 8 years old. I don’t know where they got the cold cuts from - quite possibly from Gitlitz, our local kosher deli on 77 St. and Broadway, which has been gone since the late 70s, I think. It’s a real shame. There used to be more good Jewish delis around town.

@Pan, It may be a while before I can get to try the tongue, but when I do, I’ll let you know how it is.

Your mention of Gitlitz is really interesting. When I was growing up on the LES ('40s and '50s), the kosher deli we always went to was Gitlitz, on Rivington, between Norfolk and Suffolk. I don’t remember when it closed, but maybe it was in the '60s, and the owners moved it to the UWS.

National Pastrami Day was this past Thursday, Jan. 14th. In celebration, I wrote a blog post about Sarge’s.

Edited to add: Sarge’s offered a BOGO on pastrami sandwiches the entire day. Unfortunately, we weren’t in the city so couldn’t take advantage.

You can eat it at the counter at the front, overlooking the street.

Are there any stools at the counter?

Standing room only, good for 3 people. Maybe 4 if one of them is standing sideways.

I didn’t know that history about Gitlitz!