Eater: ‘Lucky Peach’ Will Likely Fold in May 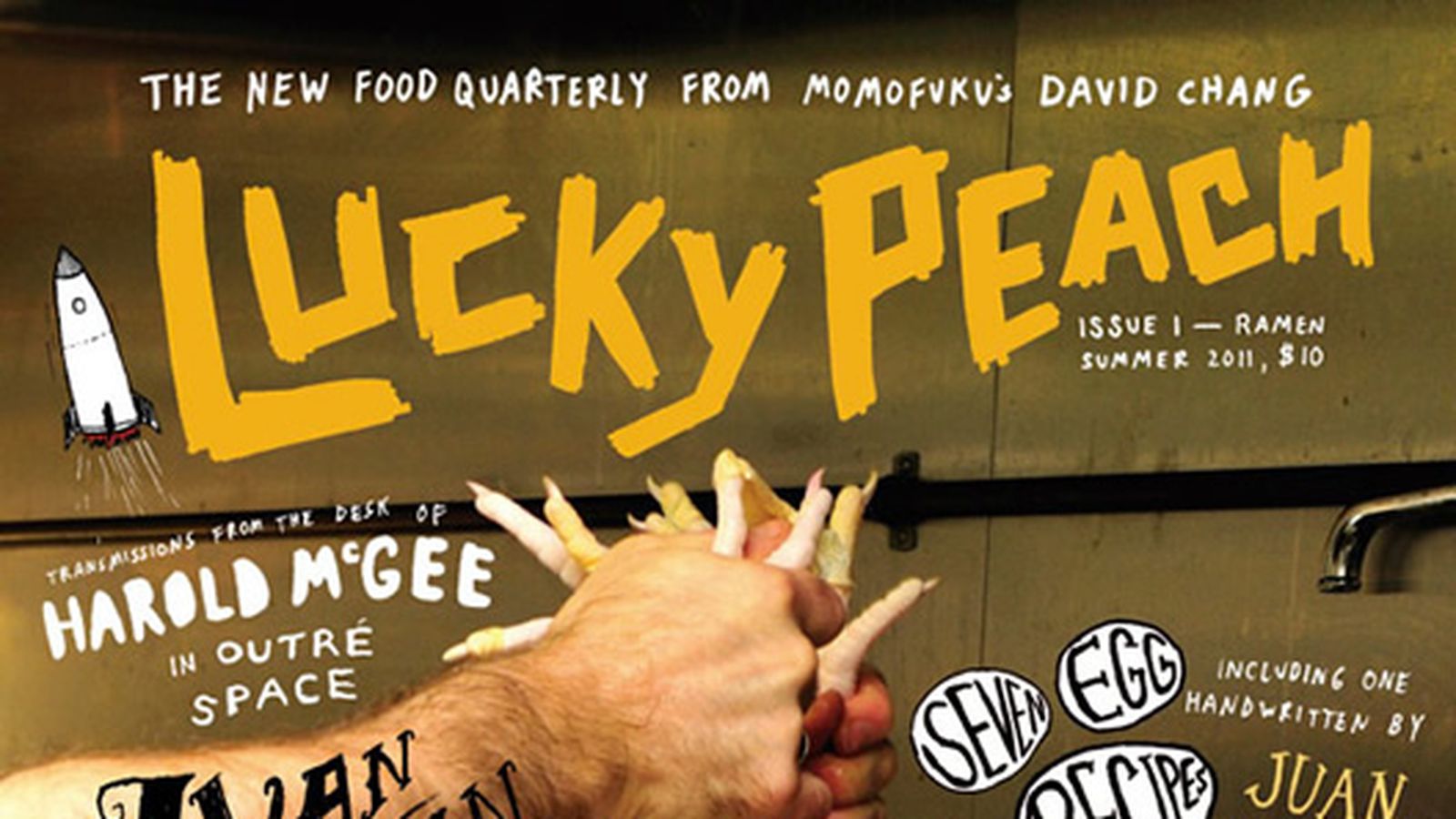 The magazine laid off its entire staff on Monday

That sucks. I really appreciate the depth and breadth of the publication and the fact that the writing is actually thoughtful and skilled.

This really depresses me. So much madness in the world, and now no more Lucky Peach. Where will it end?

Not surprising at all. People like listicles, not long-form articles about food/restaurants.

It’s true. I had a girlfriend who worked for Gourmet. They closed their L.A. office and she was laid-off.

I used to be a magazine junky. Now the only time I pull one out is to read when I get my hair done. But I still enjoy that moment. Food and travel are my faves of course.

I bought The Chicken Issue and just ordered the Fall/Winter issue. The woman said it would be their last

Slight correction: some people like listicles. Just like some people seek out long-form, in-depth writing about food, restaurants, and everything related (even tangentially) to them.

Personally, I find listicles annoying and lazy. If they’re listicles that link to more in-depth info, then I can handle them, otherwise I’m not inclined to click and if I am “tricked” into clicking on them there’s a pretty good chance I’ll immediately leave the page. They’re not journalism: they’re insulting to the intelligence of the reader and - I think - contributing to the overall dumbing down of discourse.

Lucky Peach is legit journalism: it challenges assumptions, provides insight into a bunch of stuff I know zilch about, and broadens my world, in terms of food, history, culture, etc.

Our society is poorer for the loss of Lucky Peach, I think.

What we know is that hardly anyone likes long-form or “legit” journalism since Lucky Peach is closing its doors.

Apparently it’s your fault. Why didn’t you pay them more money to stay open if they were so amazing?? =(

You were the one who originally commented with “people like listicles, not long-form articles about food/restaurants”, so it seems hypocritical to then accuse ElsieDee of adding no information in her use of “some.” By “people” did you mean 3,000,000 people or 5?

That aside, I’d add that just because a publication is not financially viable does not mean it’s unpopular. It’s hardly news that our collective shift to digitally consuming content has left lots of very popular media outlets (including the New York Times) scrambling to find new ways to generate revenue.

So to attribute Lucky Peach’s closure to its lack of popularity as a matter of fact is simply wrong.

But she did add information; just because you missed it does not mean the rest of us did.

You were the one who originally commented with “people like listicles, not long-form articles about food/restaurants”, so it seems hypocritical to then accuse ElsieDee of adding no information in her use of “some.” By “people” did you mean 3,000,000 people or 5?

A generally speaking trend of the majority. Who reads “people” as “absolutely everyone”. Other than “needs oxygen to live” or something similar, is there anything true of absolutely every person on the planet?.. Who the hell reads that way?

That aside, I’d add that just because a publication is not financially viable does not mean it’s unpopular. It’s hardly news that our collective shift to digitally consuming content has left lots of very popular media outlets (including the New York Times) scrambling to find new ways to generate revenue.

Short of scandal like embezzlement or something, I don’t see how that could be the case. Did Lucky Peach go out of business because someone embezzled all of their money and bankrupted them internally despite massive popularity? Or are you just saying there is no way to make money off of being super popular on the Internet?

What information was added?

, I guess. You’ve been hiding your light under a bushel. I was responding to Aesthete’s comment about people not being as into long-form articles. I don’t even know what a listicle is… What is a listicle?

What is a listicle?

You frequently see listicles on sites like Eater and the ilk. Titles like “9 Best Pizzas in Los Angeles” or “12 Best Chocolate Desserts in Las Vegas” and so forth.

They’re short form: usually a numbered list (with the “best” one being first, so what’s the point in even scrolling down?) with plenty of photos and very, very little information given about what makes that particular item “best” (and the idea of best is arbitrary, of course).

They’re frequently anonymous, though not always, and seem to - at this point - function as both click bait (people like reading lists so they’ll want to read this one!) AND often are ranked with the intent of stirring up controversy (as in, “We know X pizza is controversial, so we’ll put it at number one and watch everyone scream”), which then leads to people linking to the piece, discussing/arguing about it, etc.

Listicles drive traffic and that’s what sites need in order to survive if they’re advertising-based. (The really annoying ones have just one or two items on the page and then you have to click to a new page to see the next items on the list, which means being served new ads on each new page.)

I don’t see listicles as contributing a whole lot of relevant information but won’t deny they drive traffic.

Taking Eater’s basic approach, they appear to be attempting to balance traffic driven by the listicles and slightly longer pieces. I don’t know if they’ll be successful in the long run. I’ve no idea what their traffic or audience behavior looks like.

just because a publication is not financially viable does not mean it’s unpopular. It’s hardly news that our collective shift to digitally consuming content has left lots of very popular media outlets (including the New York Times) scrambling to find new ways to generate revenue.

Thank you for saying this, @onelabneh: this is a struggle that lots of media outlets are dealing with right now.

It costs money to design and run sites, pay the coders, the writers, the editors, the photographers, for the hardware and software, and everything else. And they need to have sites that are responsive and flexible enough to immediately adapt to new versions of various browsers and devices, etc.

The New York Times, LA Times, and many other businesses that started in print are trying to figure out how to keep the lights on in a time when many readers are looking online rather than to print. Putting information behind paywalls is one approach. Other news sites, like The Guardian, have the information available to all but ask readers to become sponsors/members.

Getting back to Lucky Peach: I’m guessing the publication and site are folding due to financial issues (that seems like the most logical assumption but I’m not privy to what’s happened - for all I know they burned out).

They may not have had enough print subscribers to support the website, writers, editors, and various infrastructure. There were definite website issues with responsiveness/load times/pages not fully loading on mobile devices, which I’m guessing frustrated at least some of their audience.

I don’t recall seeing ads on the Lucky Peach site - that might have been one way to bring in some revenue. But with the prevalence of of various ad blocking software I don’t know how much that would have helped.

Maybe if they’d stayed with a print only version?

We’re living in a time where the technological changes - and how people are choosing to use technology (and what they demand/expect from it) - are causing a lot of upheaval as businesses do their best to adapt. Some will make it (I hope!) and some won’t.

I do think there’s an audience for serious, long-form journalism, whether it’s food-related or other: the question is how to deliver those pieces to the audience and not go broke in the process.

I don’t have a blueprint for that.

And here’s a bit more: 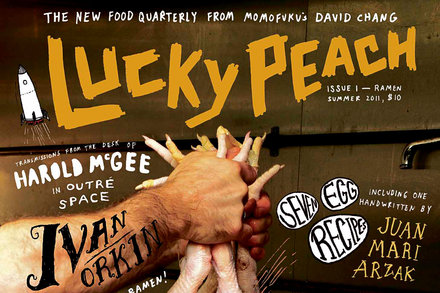 The irreverent magazine, which linked food and journalism in a fresh way, foundered in part on differences among its partners.

Analysis | The mysterious demise of Lucky Peach magazine and its uncertain...

The groundbreaking, genre-bending food magazine will publish its last issue in the fall.

After reading these articles, especially the NYT, it sounds like ego clashes. I really am going to miss that mag.