I have to drive up to LA for some errands and I’m looking for someplace to eat during lunch in Koreatown on a weekday where I can take advantage of the weekday lunch time to get a lower price for a delicious meal.

Not knowing a lot about all the different places in Koreatown, I’m leaning towards Park’s BBQ because that’s the place I’ve heard good things about. But, I also know its expensive and I thought lunch would be a good way to try their dishes.

It seems, however, that their lunch specials wouldn’t include the grilled meat that they’re famous for. Would it still be worthwhile to go to Park’s for lunch without trying their grilled meat?

Any other suggestions for Koreatown?

Yes Park’s BBQ has a separate lunch menu that doesn’t include their delicious meats. However, a gem on their lunch menu is the Kalbi Tang, which is a soup made with short rib. It’s maybe the best version in all of Ktown. At ~$10, it’s an absolute bargain.

Another great lunch special option is at Kobawoo. You get a portion of their famous bossam w/ soy bean soup for ~$15. 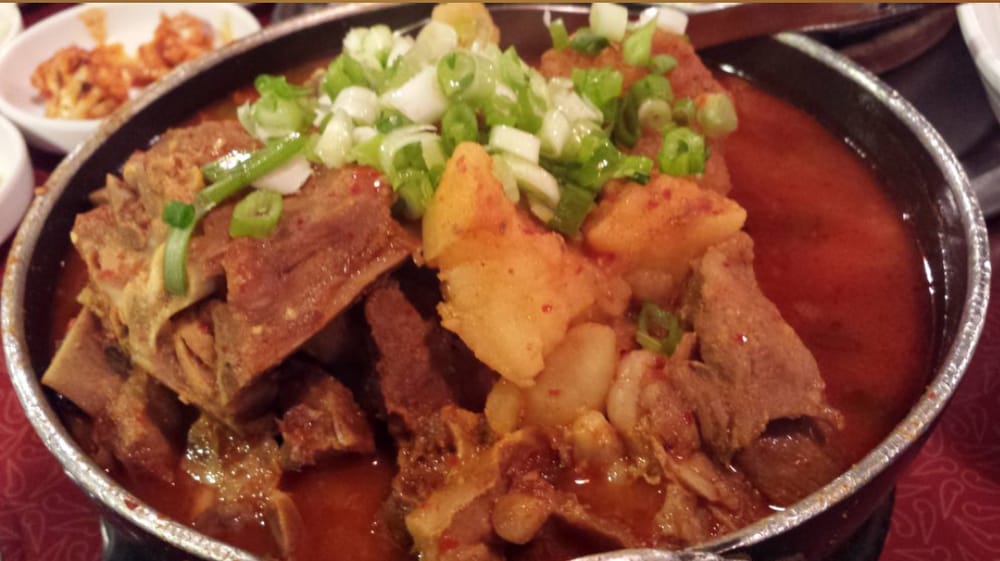 For a nice lunch box combo, or some dwegi gogi or maybe a kimchi omelet try Toe Bang Cafe.

Disagree. The kalbi tang at Park’s for lunch is perfect for a solo diner.

If it makes any difference, I’m also meeting up with two other people for lunch. The other two just moved to LA so I don’t want to pick a place too expensive.

What’s Kobawoo’s lunch price for their bossam? I couldn’t find their webpage, but menupages list their lunch bossam w/miso stew at $10. What else would you get at Kobawoo after the bossam- the bulogi and dotori, acorn noodles?

And, has anybody here tried Mapo Kkak Doo Gee Restaurant?

park’s kalbi tang is rotated. otherwise, with 3, get stuff off their regular menu and grill

kobawoo lunch is $10 the last i was there. it’s a one trick pony. stick with the bossam.

mapo is a homey restaurant. all solid.

gamjagol has a lunch menu as well. i think it’s gamja tang for $8.

Gonna second that one. Galbi-tang at Park’s is awesome and you can be in and out in 25 minutes.

Does Jangchung-Dong serve the best Jokbal, pig’s feet, in Koreatown?

I looked at their menu, and it seems like you can get their jobkal at about half the price if you order it at lunch.

But, what else would you order besides their jokbal?

Does Jangchung-Dong serve the best Jokbal, pig’s feet, in Koreatown?

I looked at their menu, and it seems like you can get their jobkal at about half the price if you order it at lunch.

But, what else would you order besides their jokbal?

Yes, and the bossam is also very good, though not as good of a value. Soondae is good, as are the pancakes. Jokbal is the star, though.

And, has anybody here tried Mapo Kkak Doo Gee Restaurant?

Fucking love it. Was going to suggest it.

What else would you get at Kobawoo after the bossam- the bulogi and dotori, acorn noodles?

that and the seafood pancake

one other idea that might give you and your friends more options is the food court at koreatown plaza.

the spicy shrimp dumplings at pao dao might be the best in k-town, you have a awoolim outlit if korean style sushi rolls (gimbap) and there are enough other decent places to give you options.

I find the seafood bibimbap at Gamja Bawi and Jeon Ju to be the most satisfying lunch options. I don’t know how much they cost, but they are ~ $10. At Jeon Ju, it comes with a bunch of panchan. At Gamja Bawi, not so much.

Please, not the Koreatown Plaza foodcourt… Other than the soondae there’s little of note there and even that’s not a reason to go there.

your moniker is apt.

I like Jeon Ju, too. What’s the story with Gamja Bawi?

so it’s ok to be an ass as long as you advertise it?

seriously, i only needed to read a few of your posts to decide it was better to skip them going forward. it won’t hurt my feelings if you ignore my posts in the same way.

Hey man, I just disagree that the food in the Koreatown Plaza food court is, by and large, worth an outing. If you want to base a blood feud on that, go right ahead. I don’t have the energy myself.