For the Seafood Village, now Seafood Palace enthusiasts, do you prefer the Temple City or Monterey Park location?

Favorite dishes besides the Typhoon Crab?

If nothing else, parking is easier. Much easier. Better restrooms too.

Have to agree with Temple City. Besides easier parking it can be accessed from the 210 rather than the 10. I usually hit it after a backpack in the San Gabriels. Along with the suggested dishes I am very fond of the “baked” squid which is actually deep fried, and the black bean clams which Mr. Gold didn’t care for but I find to be delicious.

All I know about this subject is that I find the food just okay but you might want to hit up the massage joint in the strip mall in Monterey Park.

Thanks to all of you. Will update in this post. Much appreciated.

Temple City–better parking and larger. Also, in the MPK location, there is no waiting area to speak of, so you’re standing in the parking lot. In the TC location, you can wait without risking life or limb.

Monterey Park, much closer to the freeway (and therefore the westside – I got you Westsiders), opens til later.

Parking is not an issue if you use the bank’s lot or just jaywalk across the street.

If nothing else, parking is easier. Much easier. Better restrooms too.

+1 on the ong choy with fermented tofu and the garlic crab
I was just okay on the house special fish in chafing dish.

I liked the steamed chicken in medicinal herbs and mushrooms dish but this was years ago. It was one of the pictures overhead. Not sure if it’s still on the menu 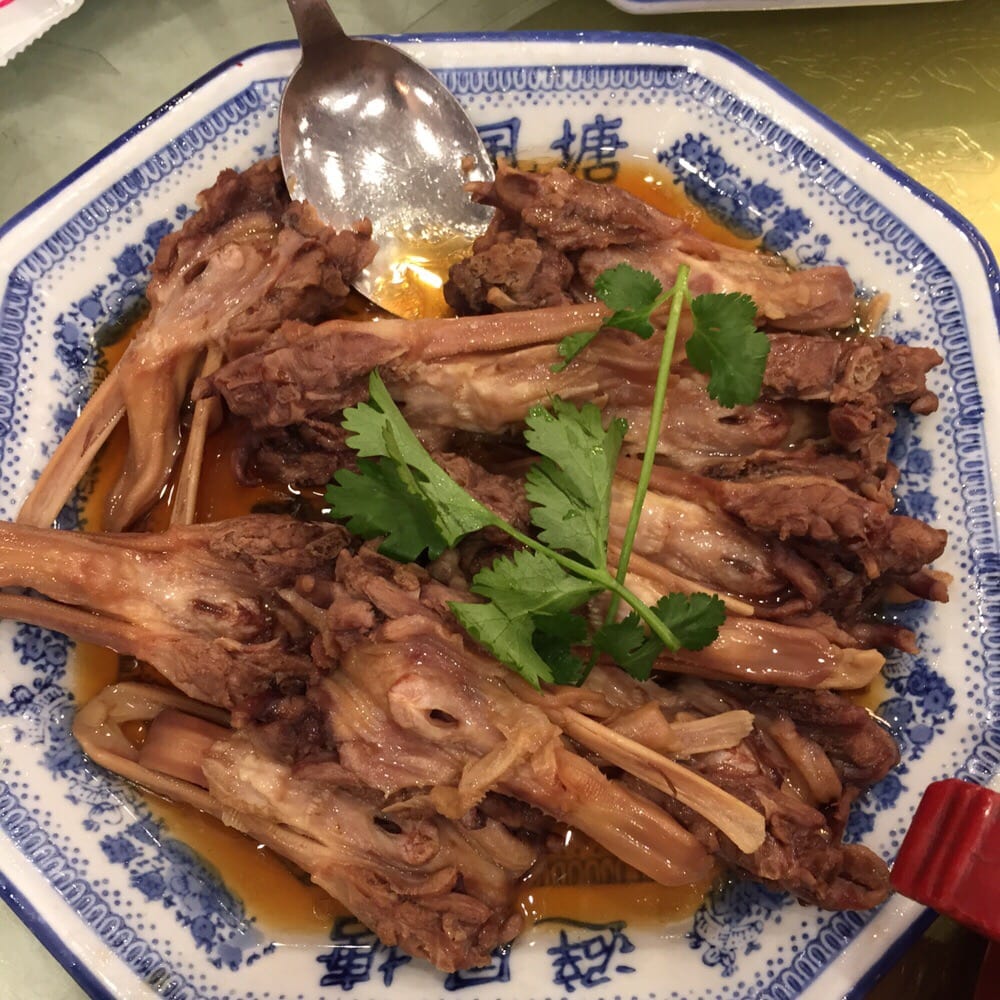 As does this braised pork hock and carp dish: 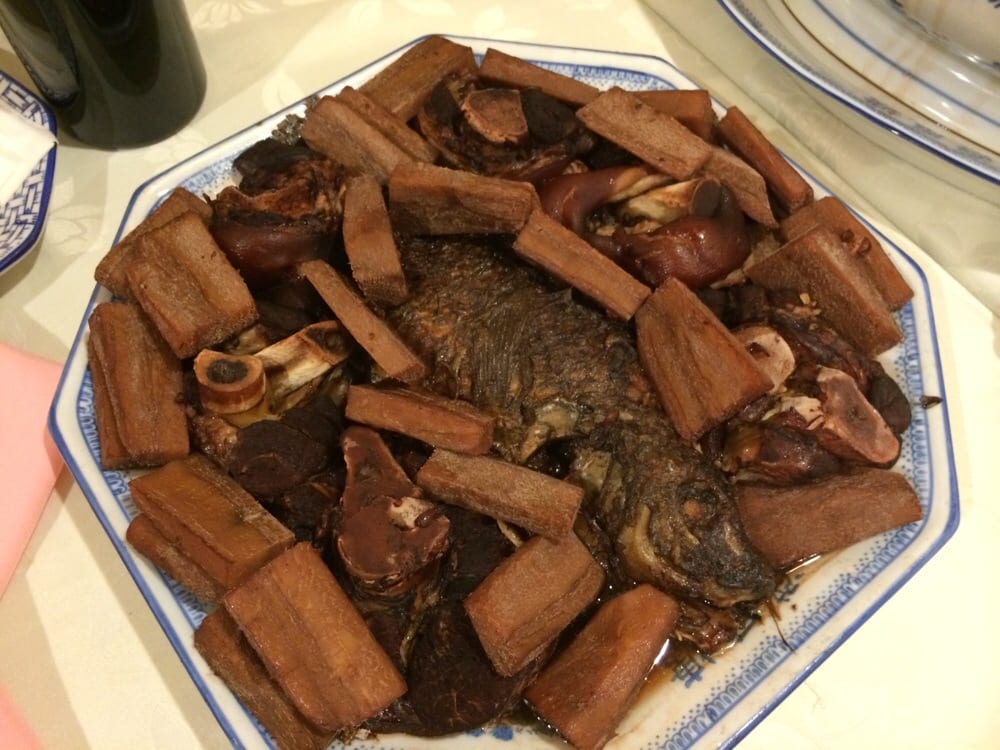 Fond memories of first and only visit there back in April, at Seafood Palace Temple City location. Can’t remember why I picked SP TC, maybe it was because of the ex-CHers when I asked about it.

If you stick with the Chiu Chow esque items, also cannot go wrong. Was in total Chiu Chow heaven after this meal.

What other dishes you recommend here for a legit Chaozhou meal?

That’s a tough one, since I’ve only been to the Temple City location once and only had that sampling years ago and I don’t have any updated info on the other Chiu Chow sounding dishes (I will certainly list the ones of note).

If using yelp pictures of the menu, and assuming they are the same across the two or three locations (including Monterey Park), one would need to investigate the following first:

Once you figure out which location is the best, try (basically take one for the team here since I have not tried any of these there):

Scrambled egg with oysters (the menu picture of this does not look that great, but this is a typical pan fried oyster omelette…not the same as the Taiwanese version though).

Chiu Chow cold crab - before you order this, if they don’t require a preorder, ask the staff to describe how this is made. There is a traditional way that’s a bit more laborious, and there’s the Whole Foods / Safeway “cold cooked crab” method. If how they do it describe sounds like what you can buy from the supermarket, make it a pass. I’d be wary of no pre-order, but perhaps they make enough of them to satisfy demand. It’s listed as seasonal, so make sure you also check prices before splurging. The elders will say save your money and eat this in Hong Kong include with the large blue crabs (“flower crab”), American crab just isn’t the same.

Probably not on the menu, but if they could do preorder, I would suggest a soup of black peppercorn, pork stomach, and mustard greens…it’s heavy duty on the pepper and this is a classic Chiu Chow soup in Hong Kong.

On the takeout menu #84 Chicken with Spicy Sauce Chiu Chow style. Bonus points if you also have the light crispy airy greens (almost like shiso leaf), a bit oily. The spicy sauce is almost like a black pepper sauce (in Chinese they call it Sichuan peppercorn but it’s not even that). Hard to describe, but it’s another signature. They also offer shrimp and scallop versions, though the chicken is more classic.

Good luck and have fun!

This is an awesome dish! This hit the table and I got hit with an incredible aroma. The taro is crispy so you get a texture balance. Really nice and flavorful! Yes lol there is a huge markup on this I think $16, can’t knock the hustle! How have I not had this all my life?

Beef was juicy with a good sacha flavor. I wonder if they make their own sacha?

Hot pot tip: get some sacha from the Chinese market (silver can with yellow bull), make a dipping sauce with sacha and a egg yolk. You’re welcome!

I’ll be back for the braised duck, scrambled egg and turnip, whatever else @beefnoguy recommends.
https://www.google.com/amp/s/www.latimes.com/archives/la-xpm-2005-may-18-fo-counter18-story,amp.html
This old article mentions the cold crab and spicy chicken. Sounds legit?

The menu says you need to preorder the cold crab 2 hours ahead.

Remember when places like this used to serve some soup? Nothing crazy…pork bones, and some greens/carrot. I notice Sea Harbour also had no free soup.

This was City of Industry location.

Damn it I should have got one of the desserts too

@JeetKuneBao it sounds like if you preorder the crab 2 hours in advance, they boil it and maybe immerse in ice and refrigerate for a quick shortcut. That is not the right and proper way… it should in theory be cooked and then refrigerated almost overnight, at least that was the way Yum’s Bistro did it in Fremont (not that I’ve had his rendition). This was why in my earlier reply above it would be worthwhile to ask how they do it. I could be wrong, but 2 hours is definitely not a lot of time if they are doing it from a new live crab. Just pray you are not getting a precooked one from Costco… El Bait & Switcheroo.

In any case you may want to skip this and savor it when 1) it is crab season around November (I’m just using our NorCal crab season as a guideline) or so and 2) perhaps even skip this and spend it on something else… save yourself a trip to Hong Kong and get a proper version done with the blue (flower) crabs, medium to large sized…you’ll pay a fortune but it will be done right (and the crab flavor is far more powerful than the varietal we have).

Sacha beef and gailan stems is such a classic Hong Kong Chiu Chow dish. You won’t find this in China I’m guessing (kind of like Fly Head, 3 Cup Chicken if you know what I mean). When I last had this 4 to 5 years ago, it was a bit too greasy. Although I bet satay beef chow fun would be pretty tasty too…but this begs for a pairing with Chiu Chow congee and at least they do a very good job with it.

The taro desserts are soooooo good. Nobody up here makes anything like that.

Yes, come back for the simmered/marinated eats. Just go to town and bring some friends so you can sample them all. Marinated duck, marinated tofu, marinated pork intestines at the very least.

If I lived any closer I’d host multiple FTC and group dinners there wine & sake too!

As always thank you thank you for dropping the knowledge! I appreciate it!

I think my next visit:

A meal curated by you with HK Chiu Chow specialties would be so cool!

These dishes seem to have been overlooked by the foodie media/Yelpers, and unappreciated. I don’t think anyone else is doing this.

Typhoon Shelter Crab, I like it as much as the next person, has stolen the show here and these hard to find HK Chiu Chow dishes go unnoticed or unappreciated

These would be worth trying, please take ample photographs and share your thoughts on them when you get to taste them.

#10 Deep Fried Shrimp Ball
#17 Pork Stomach with Black Pepper Soup, ask if it has mustard greens inside and see if there are whole peppercorns at the bottom of the soup pot.
#12 is winter melon soup in whole winter melon…that’s very traditional banquet Cantonese and surprised it’s not a preorder…would be worth trying if you want something different but you need a crew of 8 to 10 folks

Sample as many of the soy sauce (marinated) simmered items 3-9 as you can, those are the gems. Or get them as a mixed appetizer platter so you can sample everything (including tofu) and do not miss the pork stomach and intestines, even the knuckles I remember were quite tasty. Assuming the marinade hasn’t changed. Get half a duck or if you have a big party, why not get the full duck. This section alone is already perfectly setup for a great red wine pairing dinner too.

And don’t miss Chiu Chow congee, theirs taste so much better than Chao and to me is legit and reminds me of my favorite childhood private kitchen, but is quite close to it…Trieu Chau’s congee comes a bit close but is a bit thicker. You’ll see what I mean after you try it and compare.

Ask if they have “Chin Jiew chicken / Chuen Jiew / Chuan Jiao” (show them this: 川椒雞) or if they can make it which roughly translates to Sichuan Peppercorn chicken (and tastes nothing like the name), I have a gut feeling they could do that dish justice at Seafood Village. Think of stir fried chicken filet, marinated, and has some peppercorn type flavor to it, but great wok sear that makes you want rice with it…and there is this light crispy nori like vegetable (never remember what that is called) kind of like a light airy crispy kale or a pseudo shiso but without that annoying kale flavor, probably flash deep fried. You pretty much drool while you’re eating this (if it is a fantastic version).

That is a classic chiu chow dessert. So tasty.

As they do the ginko nut and taro mash so nicely, I would probably ask them to do a special preorder of another taro based dessert known as 反沙芋 which is even more traditional (and harder to come by).

It’s essentially sugar and fried taro, but the cooking technique is very exacting and a test of true Chiu Chow chef skills and wok techniques.

The trick is whether they can source high quality taro and how seasonal it is. Up in NorCal there was a time when some restaurants could source great taro from Taiwan but haven’t seen it around for a while.