We’ve recently changed addresses, and now find that we need to locate new neighborhood spots to chow on those nights you just don’t want to cook. Even though we didn’t move too far, most of our normal haunts won’t be in close enough proximity…and we’d like to discover some new places.
We’ll need a new AYCE sushi joint…sometimes you just want cheap bastardized sushi…and our kids are in that phase where they only eat California rolls. Not worth it to take them anywhere truly amazing. I’m aware of the sushi place in Yorba Linda for when we want a local omakase meal.
We’ll need a new Mexican place. Arturo’s Puffy Taco is great, but I’m really going miss margaritas and happy hour at Los Compadres. I’m looking for a place where it feels like someone’s grandma cooked for you.
A local bakery would be great. Hopping over to Porto’s in Downey isn’t going to be convenient anymore.
A breakfast/brunch place that isn’t Taps would be good. The kids love pancakes.
I go to Portsmouth for oysters and French-Mexican fusion seafood often. I’ve been to Mr. V’s, but can’t imagine going there often…not my vibe.
Any recommendations would be appreciated. Meals, snacks…open to anything since we’d like to explore the area we now live in.
Thanks!

Not in tour stated geographic range, but not far from Taps. Get there by 9 or wait.

Thanks, @JRSD! So long as it within the same vicinity, it meets the basic criteria. Just looking to do some exploring. My favorite way to check out different areas is just to eat my way through

Theres a place on Imperial called Tempo that looks interesting.

Havent tried it since I cant tell if its going to be OK to bring a baby but there seems to be potential from looking at the site/menu.

My oldest lives in Whittier. A lot of his favorites are in this LAT article. In particular Bottle Room. He was just raving about the pork taco w/mango, corn salsa. In his words "And I don’t even like mango salsas." 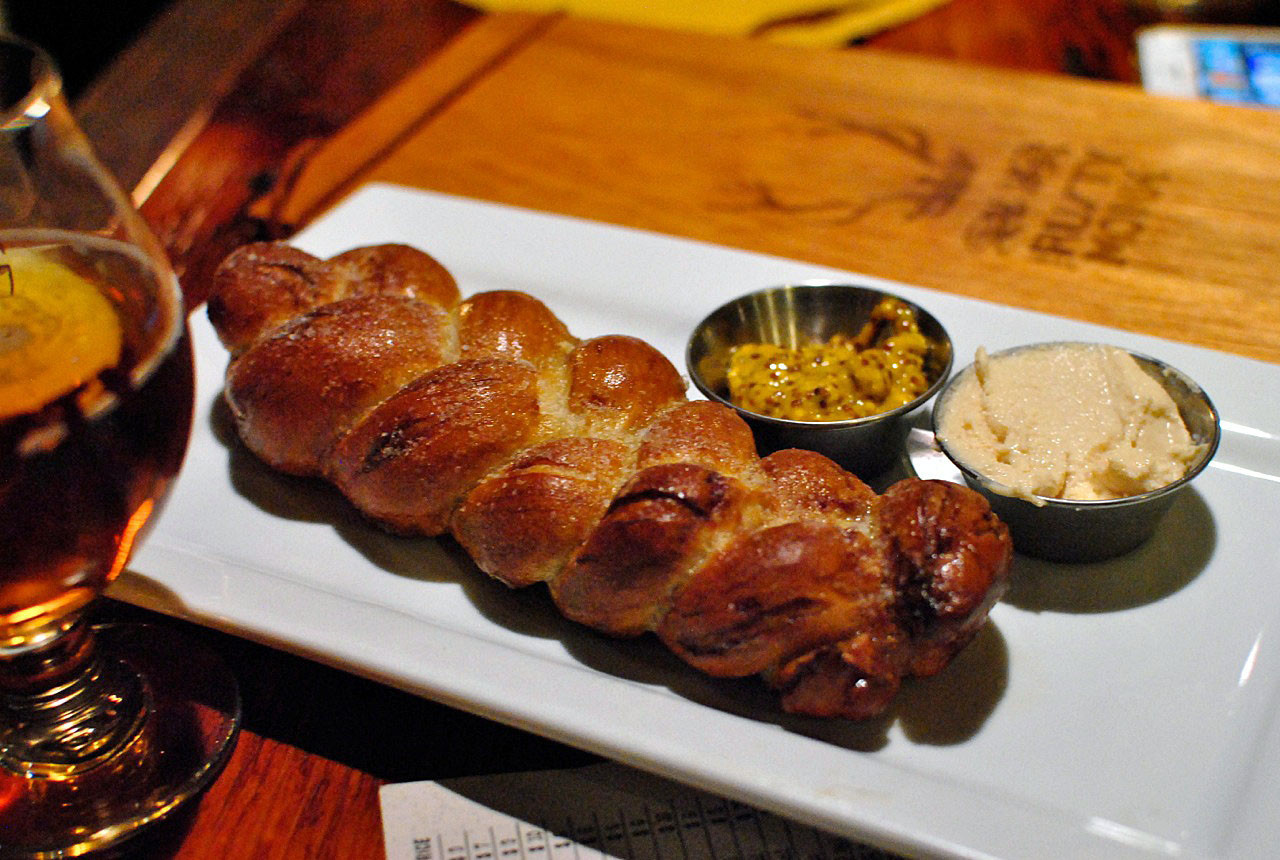 Here's a secret about Whittier: It's ascending as a great food city

Wasn’t too impressed. I got the porchetta and it was meh.

+1 on the Bottle Room. Partner and I have been there many times and always enjoy it. Four Bricks for upscale new American in an unpretentious setting (I think I might’ve written a brief review of it somewhere on this site).

Thanks, @A5KOBE! I’m a fan of Bizarra Capital. The mole tots are no joke…and while minute, I love the rice they serve there.

Thanks, @TheCookie! I like the Bottle Room, too…I tend to forget it because I roll over to Portsmouth instead. They have a great all-day Sunday happy hour.

Thanks, @paranoidgarliclover! Funny enough, the former president of my company is part-owner of Four Bricks. I’ll keep an eye out, and will try to check it out when it reopens…however, didn’t they open just this year? Seems strange to close for renovations/expansion this early in the game.

Not living up there anymore, but here goes…

@A5KOBE and @teriyakichi have it pretty well covered. Da Rae is very good Korean. For Korean BBQ, try Mr. BBQ on State College just south of Chapman. Also will throw in a big +1 for Early Bird. In the same center, there is a very good sushi restaurant, though it’s not AYCE. I think it’s called Ginza.

For AYCE sushi, there’s a place called Oishi on Imperial and Rose. They used to be good years ago before they were AYCE, but I can’t speak to the quality now. There’s also Kyoto buffet on State College and Birch, which I haven’t been to.

I’ll throw in El Farolito in Placentia for Mexican food. There are other good options in old town, but most don’t serve margaritas. I would avoid Tlaquepaque down there. Cha Cha’s in Brea is a decent option for Mexican with good margaritas.

You may want to check out the new La Floresta center on Imperial and Valencia. They have Mendociino Farms, Jimmy’s Famous American Tavern (haven’t been yet), Slapfish, and Capital Noodle Bar to name a few. PK Burgers across the street is a local institution and has good burgers and breakfast burritos.

For breakfast, you have a Black Bear Diner on Beach Blvd. I haven’t been to this one, but I’ve had solid breakfasts at their Redding and Havasu locations. And you may be interested in Mrs. Bea’s Louisiana Chicken and Waffles.

+1 on great suggestions from OC Steve and A5Kobe.

Mexican - El Farolito. If you go anytime after 5pm or 11am on the weekends there will be a line. Very solid food, huge portions at a reasonable price.

Local Bakery - I usually make the trek to Blackmarket or Cream Pan for baked goods… Merely Sweets is downtown Brea makes very good macarons and triple berry cake but its not a bakery. If you find something good please report back.

Breakfast - Early Bird is great and they have excellent single origin coffee. Early Bird is supposed to be opening a roaster and coffee shop in the La Floresta shopping center on Imperial and Valencia. The Original Pancake House is still under construction on Yorba Linda BLVD and Kraemer but should be opening soon.

Lillie Q and Meat Up BBQ have good happy hour deals. Pretty kid friendly. Meat up BBQ has a very good tap list if you’re into that type of thing. Taps changed their happy hour menu in Brea. They removed a lot of good items and increased the price of the pizza from $7 to $10. It was one of our go to places but haven’t been back since the menu/price changes.

Thanks, @teriyakichi @OCSteve and @js76wisco! Kitakata Ramen I’m familiar with…I like the ramen, but those flat noodles trip me up a bit. I’m excited to try Moros Cuban…a mix of Cuban and Spanish sounds fascinating. The Korean recs are much appreciated…Garden Grove from here, while it isn’t bad…it’s just not as convenient. I’m excited for this list of new places to check out. I’m thinking Early Bird is going to see us this week…the kitchen isn’t up and fully operational, yet. Most of our move-in transition meals have consisted on Trader Joe’s salads and microwaveables, fast food take out, and a mix of Mom’s thoughtfully prepared food.

Seems strange to close for renovations/expansion this early in the game.

Perhaps. They had apparently bought out the property next to the currently standing restaurant for a bakery (IIRC). I wonder if they’re closing shop for renovation b/c they plan to expand the restaurant itself? Or maybe b/c building the bakery is taking so much energy that they didn’t want to be distracted w/ day-to-day restaurant operations? Website said they should be back open in a few wks.

I think there’s also some Italian place in the area that does housemade pasta, but the name eludes me (and I’ve never been myself).

BTW, how close is Downey? There’s a Porto’s there…

@paranoidgarliclover It’s probably 20 minutes away, but the idea of driving down Imperial and running through traffic for the 5 and 605 doesn’t appeal to me. Before our move, I frequented Porto’s often. Might have to wait for them to open the Buena Park location…that drive will be a bit more palatable.

If you like Korean food, definitely need to visit Buena Park. It is turning into a K-town (almost

If you like Korean food, definitely need to visit Buena Park

i was going to suggest the same thing

@teriyakichi That’s what they’re calling that lit up monstrosity? I drove by recently and thought the developers believed that they were building in Vegas. It was very colorful and bright. But good to know that new businesses are coming into the area.